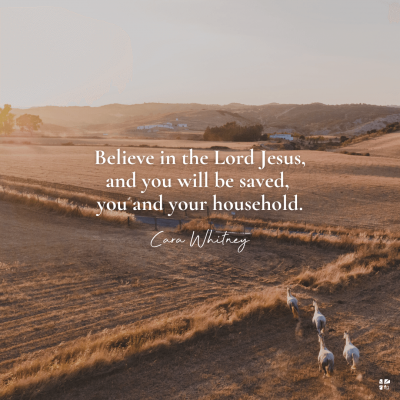 [The jailer] brought [Paul and Silas] out and said, “Sirs, what must I do to be saved?” And they said, “Believe in the Lord Jesus, and you will be saved, you and your household.” And they spoke the word of the Lord to him and to all who were in his house. And he took them the same hour of the night and washed their wounds; and he was baptized at once, he and all his family. Then he brought them up into his house and set food before them. And he rejoiced along with his entire household that he had believed in God. — Acts 16:30-34 ESV

It’s not always horses that have taken me on the wildest rides in my life — and believe me, I have eaten dirt plenty of times.

To be honest, the hardest hits have come from horse people I thought I could trust but who turned out to be con artists in disguise.

I always say that horse people are never lukewarm. They are usually salt-of-the-earth-type folk or they are intensely toxic. Why are they so polarized? I have no idea, but I have experienced my fair share of both. These days I am lucky to be surrounded by only the salt-of-the-earth horse owners, due mostly to the fact that (for a moment) I am taking a break from buying and showing horses.

I had purchased a horse from a woman on the East Coast a few years back. By the time the transport truck showed up, an unbroken horse stepped off that I suspected was from a sale barn and not her supposed show barn. This unscrupulous woman had sent me a different horse than the one I purchased. The animal I bought was supposed to be twelve years old and “husband safe.” But after an inspection by our vet, because this poor horse also came to us covered in rain rot, he concluded that this animal was probably only about three years old. And by the way, it almost killed my husband. Imagine that scene, Dan on the back of this beast that was bucking like a rodeo bronc. Incredibly, Dan rode it out (and he wanted me to let you know that).

When I called the woman and suggested with certainty that she had sent me the wrong horse, she faked a bad phone connection and then would not pick up when I tried calling back.

Why is it when we get taken advantage of or swindled like that, we are the ones left feeling as if we have done something wrong? I was so embarrassed, and I felt so stupid.

After much prayer, I decided God was giving me an amazing opportunity to witness to this lost soul and that I needed to respond to this circumstance with an action that she would never expect. Instead of involving an attorney and serving her with the papers she truly deserved, I decided to serve her with a Bible instead. In its pages I had handwritten a note that included the Gospel. I let her know that I had forgiven her, and I went on to say that if she didn’t want the Bible, to at least put it in a drawer for a day when she may want some hope.

I’d like to think that I offered her something Christlike enough that it made an impact on her the moment she received it. But also it’d be safe to say that some people really don’t want to hear what we have to say. If she hasn’t read it yet, I pray that she has at least put it away until the day her heart is prepared enough to hear what its pages have to say.

Because God turns messes into messages, this story does go on to have a happy ending here in Nebraska. We gave that misrepresented horse to our neighbor Brenda, along with some training. Lucas has grown to become Brenda’s number one trail horse. Our sale barn mishap has been redeemed.

It also takes a lot more than our persuasive powers to convince others that Jesus is the Savior.

At the end of the day, a true seeker really wants to know the truth, and no amount of arguing, trickery, or manipulation is going to make their heart beat for Jesus.

I know from my own experience that I had to get to a point where I just wanted to know the truth.

Sure, my wallet took a hit that day on a bad horse deal. But I’d rather see Heaven gain a soul than worry about my hurt pride. For people to be changed by Christ, they must first come in contact with Him, so we have to live tactfully and not get discouraged even when others embarrass us or make us feel stupid.

Let Scripture remind us about the Philippian jailer who in the book of Acts didn’t have a change of heart after hearing a lecture, but rather after hearing just one sentence:

Believe in the Lord Jesus, and you will be saved, you and your household.

When the heart is prepared, the odds are good that you won’t need that much convincing to lead another to the Savior. Keep it clear and most of all sincere. When God swings open a door of opportunity, we just have to be ready to enter.

Lord, help me always be available and willing to lead someone to You — even those who mistreat me. Amen.

Maybe it’s not just horse people who are never lukewarm. You might find that people in your life are either salt-of-the-earth types or those who would swindle you or stab you in the back. How should we, as believers, respond? Forgiveness and a Bible is an incredibly gracious and Jesus-like response! Come share your thoughts with us. We want to hear from you! ~ Devotionals Daily