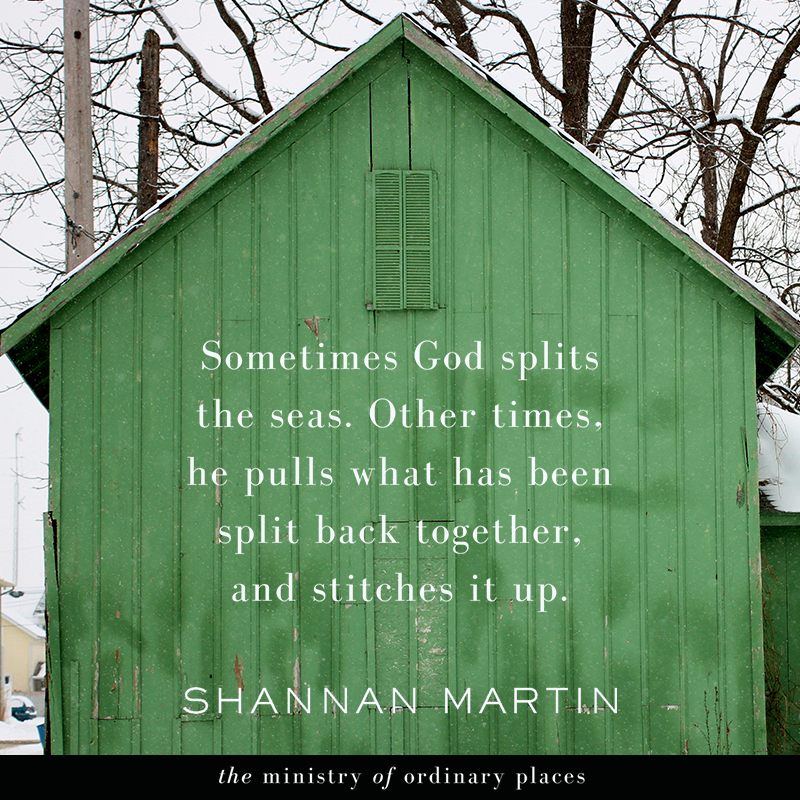 In the book of John we read about John and Andrew, ordinary men who, by the power of the Spirit, recognized Jesus as the Lamb of God. Compelled by His presence, eager and curious, their first questions were stunningly basic. Who was He, really? How did He live?

No surprise, the Son of Man (Luke 7:34) led with an invitation to open their eyes and join Him in the work of the kingdom.

The life of Jesus tracks a sensory-rich narrative. We read in Luke of burning incense, chanting crowds, angel voices booming. Dusty roads, mangy shepherds, and a young girl, “obviously pregnant.” Heaven came down as a Baby with dimpled hands and a dark swirl of hair and soon, men were tracking the night sky, wide awake with wanting.

Jesus grew, drawn to the wildest ones, those most likely to be written off as unfit, unworthy, in need of a lesson on the ways of blending in with the religious culture surrounding them.

By no mistake, it was John the Baptist who plunged Jesus’ head into the water, upsetting authority and the cultural code. Where the world saw an untamed man, crazed, insane, disgusting, and disrespectful, Jesus saw a worthy protest, choosing him as his line in the Galilean dust.

Jesus came to us as us, a person with eyes, ears, a mouth, a nose, fingerprints and hair follicles. He cried. He feasted. He walked until His feet ached. He reached back after a long day and squeezed the tension from His own sun-weathered neck. He got goose bumps. He took naps. He felt alone sometimes, because He felt alive.

He engaged the world by paying attention to His corner of it and really being with the people near Him. He chose well by choosing the humble and overlooked.

He’s asking the same of us.

A life hidden in Christ means we will continuously crave more of God. The good news is, He’s right here, wherever we are, alive and at work. He’s in the faces we see and the stories playing out in the most ordinary places.

Though He doesn’t need us, He wants us near. And so, the invitation stands.

Original devotion written for FaithGateway by Shannan Martin, author of The Ministry of Ordinary Places.

Think about it: Jesus came to be near us… the wild ones, the written off ones, the unworthy ones. He put on bones, wriggled into a suit of flesh, and slipped into frailty and weakness. For us. To know us and be known. Come and see! Share your thoughts on the Son of Man with us on our blog. We want to hear from you! ~ Devotionals Daily