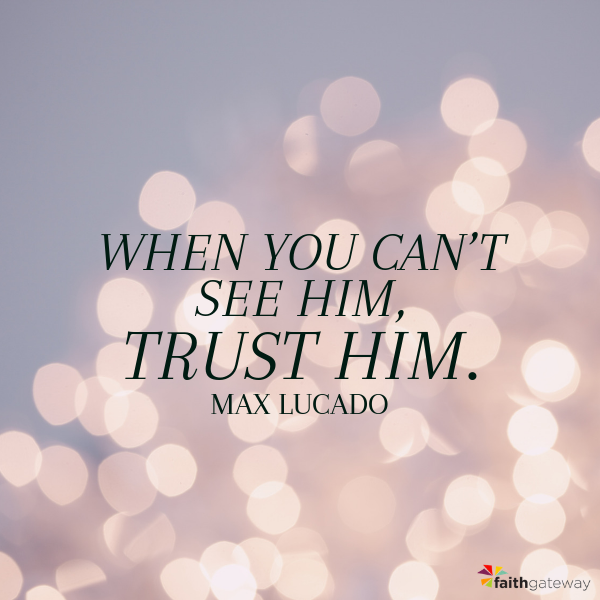 Let me share with you the thoughts of a young missionary. What follows are phrases excerpted from his journal during his first month on the mission field.

On the flight to the field he writes: “The next time this plane touches down, I will be a missionary. For good! Yes, finally. To God be the glory.”

The second day he reflects: “I keep reminding myself that the homesickness is temporary — it comes with the weariness and adjustments. That doesn’t remove it, though. I must remember the reason I’m here. Not for my own joy or gain, but for the growth of God’s kingdom.”

By day number three his spirits are up: “God, it’s a grand blessing to serve you. The people are so friendly… the mountains are so pretty… our friends are so gracious.”

But on the fourth day his spirits sag: “It’s difficult for us to think about home. We cried this morning.”

On the fifth day he doesn’t rebound: “Today is not so clear. The clouds have buried the mountains. The sky is gray.”

By day six, the storm is coming in: “Yesterday was the toughest day thus far. The newness is gone. I’m tired of this language. We were blue all day. We could hardly think of our family and friends without weeping.”

On the eighth day the waves have crested, and the winds are blowing: “This hotel room which has been our home is cold and impersonal. The tall ceiling, the strange walls… the unfamiliar surroundings. I held my wife as she wept, and we both confessed the ugliness of the thought of spending the rest of our lives in this foreign country. It’s hard. We’re so far from home.”

By the tenth day the gales are at full force: “Doggone it, I know God is guiding us, I know He has a plan for us, but it’s so hard. When will we find a house? How will we learn this language? Lord, forgive my sorry attitude.”

And just when you’d think it couldn’t get any darker: “I wish I could say I’m thrilled to be here. I’m not. I’m only willing to be here. This last week was as tough as I’ve ever had anywhere. My commitment to be a missionary feels like a prison sentence.”

I know well the frustration behind those words — I wrote them. I remember my confusion. Hadn’t Denalyn and I obeyed God? Didn’t God send us to Brazil? Wasn’t this His plan? Weren’t we just doing what we were told?

Doesn’t peace always follow obedience? (Why are you smiling?)

What was the result of their obedience? John’s crisp description will tell you:

That evening Jesus’ followers went down to Lake Galilee. It was dark, and Jesus had not yet come to them. The followers got into a boat and started across the lake to Capernaum. By now a strong wind was blowing, and the waves on the lake were getting bigger. — John 6:16-18

What a chilling phrase, “Jesus had not yet come to them.”

Caught in the storm of the “not yet.” They did exactly what Jesus said, and look what it got them! A night on a storm-tossed sea with their Master somewhere on the shore.

Just ask the faithful couple whose crib is empty and whose womb is barren.

Just ask the businessman whose honest work was rewarded with runaway inflation.

Just ask the student who took a stand for the truth and got mocked, the Sunday school teacher who took a class and got tired, the husband who took a chance and forgave his wife, only to be betrayed again.

And so the winds blow. And so the boat bounces. And so the disciples wonder, “Why the storm, and where is Jesus?”

It’s bad enough to be in the storm, but to be in the storm alone? The disciples had been on the sea for about nine hours.1 John tells us they rowed four miles (John 6:19). That’s a long night. How many times did they search the darkness for their Master? How many times did they call out His name? Why did He take so long? Why does He take so long? I think I hear the answer in the next room. As I write, I can hear my ten-year-old daughter playing the piano. She has just begun her second year. Her teacher recently upped the ante. No more rinky-dink songs; no more nursery rhymes. It’s time to move on. Now the rhythm varies, the notes sharpen, and the key changes. It will be pleasant to the ear… someday.

But today the notes come slowly and the fingers drag and Jenna would quit if given the chance. Am I a cruel father for urging her to continue? Am I unfair in prodding her to practice? I’m not oblivious to her struggle. I can hear it. I’m not blind to her tears. I can see them. I know she’d be much happier swimming or reading or watching television.

Then why do I let her suffer?

Because I love her. And I know that a struggle today will result in music tomorrow.

I don’t know. I only know His timing is always right. I can only say He will do what is best.

God will always give what is right to His people who cry to Him night and day, and He will not be slow to answer them. — Luke 18:7

With God there are no accidents. Every incident is intended to bring us closer to Him.

It reminds me of the often-told story of two maestros who attended a concert to hear a promising young soprano. One commented on the purity of her voice. The other responded, “Yes, but she’ll sing better once her heart is broken.” There are certain passions learned only by pain. And there are times when God, knowing that, allows us to endure the pain for the sake of the song.

So what does God do while we are enduring the pain? What does He do while we are in the storm? You’ll love this. He prays for us. Jesus wasn’t in the boat because He had gone to the hills to pray (Mark 6:46). Jesus prayed. That is remarkable. It is even more remarkable that Jesus didn’t stop praying when His disciples were struggling. When He heard their cries, He remained in prayer.

Why? Two possible answers. Either He didn’t care, or He believed in prayer. I think you know the correct choice.

And you know what? Jesus hasn’t changed. He still prays for His disciples.

Because Jesus lives forever, He will never stop serving as priest. So He is able always to save those who come to God through Him because He always lives, asking God to help them. — Hebrews 7:24-25

So where does that leave us? While Jesus is praying and we are in the storm, what are we to do? Simple. We do what the disciples did. We row. The disciples rowed most of the night. Mark says they were “struggling hard” to row the boat (Mark 6:48). The word struggle is elsewhere translated as “tormented.” Wasn’t easy. Wasn’t glamorous.

Much of life is spent rowing. Getting out of bed. Fixing lunches. Turning in assignments. Changing diapers. Paying bills. Routine. Regular. More struggle than strut. More wrestling than resting.

When Denalyn and I went to Brazil, we thought the life of a missionary was one of daily charm and fascination. A Christian Indiana Jones. We learned otherwise.

Then you learned otherwise. The honeymoon ended. The IRS called, and the boss wanted you to spend the week in Muleshoe, Texas. Much of life is spent rowing.

As things turned out, Denalyn and I had five wonderful years in Brazil. And we learned that at the right time, God comes. In the right way, He appears. So don’t bail out. Don’t give up! Don’t lay down the oars! He is too wise to forget you, too loving to hurt you.

When you can’t see Him, trust Him. He is praying a prayer that He Himself will answer.

Excerpted with permission from A Gentle Thunder by Max Lucado, copyright Max Lucado.

Are you rowing and rowing and rowing? Are you waiting for Jesus and wondering where He is? What is He doing? He’s praying for you! Don’t give up! Come share your thoughts on the wonderful, frustrating timing of God on our blog. We want to hear from you! ~ Devotionals Daily