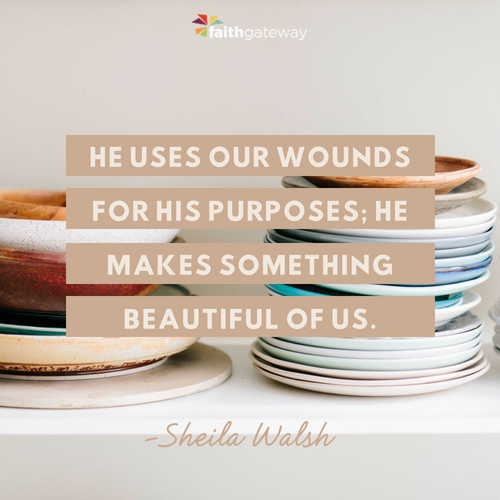 A scar is what happens when the word is made flesh. — Leonard Cohen, The Favourite Game

I was thirty minutes into a forty-minute message when I recognized that I should shift the conclusion. I’d planned on inviting women to respond to God and come to the altar, but what I sensed now was not the sort of altar call I’d ever given or experienced before. I paused for a moment, convinced that God was asking me to push into this new direction. So I asked the audience the unthinkable question: Is there anyone in the crowd who has ever attempted suicide or been plagued by suicidal thoughts like I’d been?

Then I asked, “If you’re like me, would you be willing to join me at the front?”

I will never forget the next few moments. Women began to leave their seats and pour down to the front of the stage. They came from the back of the arena and from the balconies. I stood with tears pouring down my face as I looked at them. Some were in their teens and some were in their seventies. There were hundreds of them. I thought back to nights when I’d believed I was the only Christian in the world who struggled with suicidal thoughts. But as the women poured down the aisles, I saw how many there were. Some women had struggled with suicidal thoughts for most of their lives, and some for only a short while. But here they were, and the thought struck me: we were not alone.

Something rose up in me on that stage, and I swear my five-foot-four stature stretched to six feet. I felt fierce, confident. I looked at the women who remained in their seats, the community of women who didn’t struggle with suicide or depression, and I asked each to stretch out her hands toward the struggling daughters of God as a sign that we were standing together. Then, I prayed.

I asked God to shine His light into our darkness. I asked Him to breathe hope into the stagnant filth of despair. I asked for His truth to penetrate the lies we had all believed for so long. Then I closed with a scripture I have loved since I was a child:

The Lord is my light and my salvation; whom shall I fear?

The Lord is the stronghold of my life; of whom shall I be afraid? — Psalm 27:1 ESV

I have shared the first verse of Psalm 27 hundreds of times in my life. But that night, for the very first time, I declared the final two verses of Psalm 27 out loud over each one of us who chose to stand in the light. And that night I believed these words:

I believe that I shall look upon the goodness of the Lord in the land of the living! Wait for the Lord; be strong, and let your heart take courage; wait for the Lord! — Psalm 27:13-14 ESV

As I spoke, something became crystal clear. When we try to hide our wounds, our scars, our cancers, all those things we believe make us less lovely, we make fear and shame the stronghold of our lives.

But when we bring our wounds to Christ, when we out our secrets and shame, we make Him the stronghold of our lives, and He uses our wounds for His purposes. He makes something beautiful of us.

It’s the antithesis of what we feel must be true. Can you imagine what the church would be like if we all told the truth with gentleness and courage? It’s not that we want to become the poster children for depression or cancer or disappointment or struggle; we just want to put those things in their place. Yes, bad things happen, but we are not alone. Jesus prepared us.

If you’ve experienced a suicide among your family or friends, then you probably know that a common thought about suicide is that it is an act of cowardice. That can be true. If someone has created financial or relational chaos in their lives and it’s about to be exposed, suicide may seem like an easy way out. But to those who have struggled with mental illness, suicide is slipping over the edge. For those weary warriors, suicide is not an easy way out; it’s the only thing left that makes sense to them in that moment. The dark night of mental illness is suffocating. In that kind of despair, it’s hard to reason. You just want the pain to stop.

I attended the funeral of a young married man who took his life after a long battle with crippling depression. It was a sad occasion. After the service, many of us joined the family for coffee. While the young widow was out of the room, a couple of people made the remark that this was the act of a coward.

With tears pouring down my face, I said, “All you see is that he ended his life at twenty-six. What you’ve missed is how bravely he fought for twenty-six years, and that he said yes to life and to Christ.” I don’t pretend to understand what takes place in those final moments between a broken believer and God’s suffering servant, the risen Christ, but I do believe this:

when desperate children of God take their own lives, God may not have called them home, but He welcomes them home.

I shared the story of my dad’s suicide at a little church in New England last year. I talked about the assurance I have that my dad is safely home with Christ. At the end of the service two women brought a young girl to me. She must have been about sixteen, with long dark hair, pale skin, and sunken eyes. She was crying so hard she could hardly stand, so we sat together on the steps leading up to the platform. Finally, she told me about her father’s long battle with mental illness. She said that he was an amazing dad who loved Jesus and his family well, but one night he took his life. Her next words were heartbreaking. “I was told that my dad is in hell because he took his life.”

What cruelty in the name of Christianity! Suicide may be a sin, but it is not the unpardonable sin. The only unforgivable sin is to reject Christ. Remember this glorious assurance from Paul:

If you’re like me and you struggle with suicidal thoughts, or if you self-harm in any way, I invite you to join me in a prayer. Copy this onto a card or take a screenshot with your phone so that you have this at hand when the darkness strikes. Because you are not alone. When the darkness hits, you may feel alone, abandoned, and afraid. I know what despair tastes like, and I know the lie that says it would be better for everyone if you were no longer here. It sounds true, but it comes from the pit of hell. We stand together and declare in Jesus’ name that we will live to see the goodness of the Lord in the land of the living.

Lord Jesus Christ, I am broken but You died so that I might find healing. You were rejected so that I could be fully accepted. I choose life now in Your powerful name. I am Your well-loved child on the days when I feel it and on the days when I don’t. I refuse to listen to the lies of the enemy anymore, and I confess with my mouth that in Jesus’ name, I will live! Amen.

Excerpted with permission from In the Middle of the Mess by Sheila Walsh, copyright Sheila Walsh.

Our prayer is that if you are struggling with mental health in any way that you would hear the voice of Jesus telling you there is healing in His wings and courageously tell the truth to someone in a helping profession. You are so loved! Come share your thoughts with us on our blog. We want to hear from you!