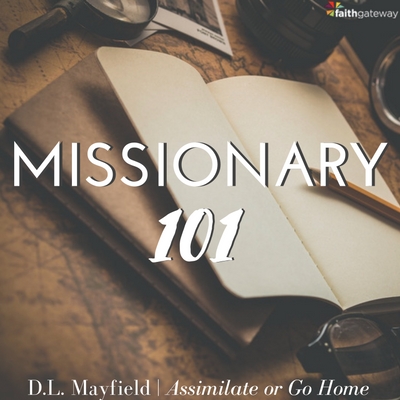 In the beginning, it felt like I was living out my dream, digging into the good, hard work of the Lord. But slowly, the challenges started to pile up, and the reality of both the situation that my refugee friends found themselves in and the limits of my own cheerful goodwill started to weigh on me. As the easy answers and theologies never seemed to work, I was forced to contemplate what it meant to build tenuous webs of relationships with people who were radically different from me. As I started to put my theoretical missionary dreams into practice, I began to long for the days when it seemed that I actually had solutions to problems.

Learning the language of the group you are trying to reach is Missionary 101.

I jumped into the process with vigor, not bothering to consider how little propensity I had shown for learning new languages in both high school and college. I just showed up and expected to learn by osmosis. As you can imagine, it was very slow going. The language of the Somali Bantu, Maay Maay, was just being written for the first time. There were rumors that the first Somali Bantu man to get his college degree was doing a dissertation on the language, right in my own city, but I could never reach him. There were no books, tapes, CDs, or classes that could help me in this endeavor. If I ever wanted to talk about God, then I had to learn Maay Maay. And so I tried to learn the way my friends had — by picking it up as I went: by sitting on the couch and praying that the words flowing around me would somehow sink in.

I would repeat the words I was hearing, and the older children, the teenagers, would look at me and shake their heads. No, no, I wasn’t saying it right. The adults would just laugh or look without comprehension whenever I tried out my new words. Either my pronunciation really was that terrible (and I suspect it was), or they had no room to consider someone as different as me speaking their small, secret language. The children would shriek at me “No! No!” and then say the word I was trying to say again, louder and louder until they were practically screaming at me. Finally, they would give up, disgusted at how my mouth turned the words mealy. I felt helpless and defensive — I had no idea what I was doing wrong and had no way to fix it.

I begged them to write the words down on a piece of paper for me. They couldn’t, which is when I first realized how far I had to go. And it turns out that I do not learn best by words being shouted at me, louder and louder with no explanation. So, my Maay Maay stayed in its miserable infancy state, never to grow and become real.

For months I still tried to be the good little volunteer, to show up on time and go over worksheets and leave after exactly three hours had passed. I would show Jamila a picture of the sun, and we would practice saying “Sunny. Sunny. It is sunny.” And the next time I came around again, the same sheet of paper clutched in my hand, her eyes would hold no

recognition for the words. It was like she was a blank canvas, smoothed every night by the troubles of getting by, of keeping the electricity on, of staying warm in the chill air, of finding any sort of food that looked familiar to cook. She had no space for the badly designed worksheets, my terrible drawings of weather conditions. I was young, I was impatient, and I really wanted to tell my new friends about the Gospel. But I could see in Jamila’s eyes that she was refusing to accept my language. Now I know that trauma robbed Jamila of memory retention and the ability to process new information.

Years later, I went back to school to get a degree in teaching English to speakers of other languages. Jamila and her friends and family were the direct inspiration for this change in studies, as my life slowly moved away from the spiritually abstract to a desire to meet the concrete and material needs I saw all around me. I learned how people from pre-or non-literate communities are a unique minority in this day and age and how the challenges they face in navigating literacy-centric societies can be overwhelming. These communities tend to be rich in oral histories and strong familial and societal ties, but are at a disadvantage when it comes to deciphering abstract representations of objects, for instance.

All those years ago, when I was showing Jamila a worksheet with a picture of a happy, smiling sun, to her it appeared as meaningless as a Q drawn with too many squiggles surrounding it. She did not tie those lines drawn on the paper to the great shining orb in the sky because she had not been raised to think that way. I did not know this, of course, and it was yet another exercise in trying to do good and failing miserably. It was another exercise in my refugee friends risking their own identities — being put in a position of showing their ignorance, of confessing to not understanding — just to welcome me into their homes to sit on their couches another day. To extend a relationship, when they did not have to.

I eventually managed to learn just enough of the language to get by with the kids. There was a period of time when I organized so many kid-related events I felt like a grubby, disheveled Mary-freaking-Poppins.

The kids had nothing to do when school was off, and they followed me around hoping for a bit of fun or to try to bum some candy off me. I learned to say all the important words: “Hey, you! Stop it! Come here! Quickly, quickly. No, no, NO!!!!!” I also learned the somewhat complex family dynamics of many of the kids (which took some time, trying to untangle who was an auntie, a mom, a sister, a cousin, or a general all-purpose relative), and I studied and memorized all the names of the mothers. As scared as I was by these strong, determined women, it was nothing to how the children felt. When a child misbehaved on my watch, I would pull them aside and whisper that I would tell their mama, that I knew which apartment she lived in, and I wasn’t afraid to march up there and knock on the door. This, knowing the name of each child’s mother, proved by far to be the most satisfactory disciplinary tactic. We were all afraid of the mamas.

I fell into similar rhythms with everyone else: the mothers and I would talk about how we were, what was cooking, how the family was, if they wanted to do English lessons. The fathers, always on the periphery, never paid me much mind until suddenly one of them would sit me down for a full-on lecture delivered in a rapid-fire manner in a language incomprehensible to me. If the adults really wanted to communicate with me, they fetched the older children, those on the brink of the teen years, the ones who were not only absorbing the language but also starting to realize all the vast cultural differences there were in this country as well: “Can you take us to the store, read our mail, call DHS, apply for energy assistance?”

Those children, those stoic little adults, those translators of a life; I loved them so much that before they even finished asking me, I would say, “Yes, yes, let me help you in whatever way I can.”

There is only so much rejection the heart can take, so I slowly stopped bringing my worksheets with me when I went to visit. Jamila already knew that she would never learn English; at the time, I couldn’t see how she had devoted her energies into surviving, as she always had done. Once I accepted it and stopped showing up to teach, when I gave up my illusions of control, of mutual dialogue and understanding, and of my ability to witness with my words, life became significantly easier. I stopped trying to force the Kingdom, stopped shining a blaring light on all of our deficits, on all that we didn’t know or couldn’t do — and that is when we actually started to resemble something like friends, something like neighbors.

I realized this some months later, when I walked into Jamila’s apartment, my hands empty and prepared to do whatever it was they needed that day. I was surprised to find the place calm, the kids late at school, the apartment hushed and dimmed. Jamila was there, sitting on her old couch, watching something on the television. She looked up at me and smiled, and she motioned for me to come sit down next to her. I did, relishing the chance to be so close to this fierce, capable woman.

I looked at the TV and was shocked to see a “Sweatin’ to the Oldies” VHS tape playing, Richard Simmons in all of his spandex glory bouncing around while people in various stages of overweight tried to copy his hyperactive dance moves. Any time the camera would cut to a shot of the sweaty participants moving their arms and legs around, Jamila would start to giggle. Her laughter got louder and louder until she was shaking, trying to contain it and failing miserably. I sat next to her on the couch, and I saw just a tiny taste of America through her eyes — the loud music, the tight clothes, and the smiling, overweight participants — and it was ridiculous. I started to giggle too, and there we were — such different women, coming from such different cultures — both of us understanding how fragile the world is, how little grasp of anything we had. Why not laugh at what we found ridiculous, sitting stationary on a couch as we watched others huff and puff their way to glory, to accepting themselves as big and beautiful and worthy of encouragement and praise and neon shorts?

We lost ourselves in the moment, until we were wiping the tears from our eyes at the hilarity of the excesses and obsessions of American culture. And I think it was that moment where, slow and small like a seed, my fear of Jamila started to change into admiration.

Perhaps we didn’t need language to communicate after all.

Not many of us will find ourselves in Mayfield’s Missionary 101 situation: unable to learn the language or teach ours very well to those we’re trying to reach for the Gospel. But, we don’t have to go very far to interact with a community with a different culture than our own, with different financial status that can feel very separate and isolating. We can all try to do good and fail miserably. But, we also can all find ways to relate, admire, and appreciate others on a basic human level. The Gospel may start as a small seed, but it grows in love! Come share with us on our blog. We want to hear from you about reaching others who are different from you! ~ Devotionals Daily