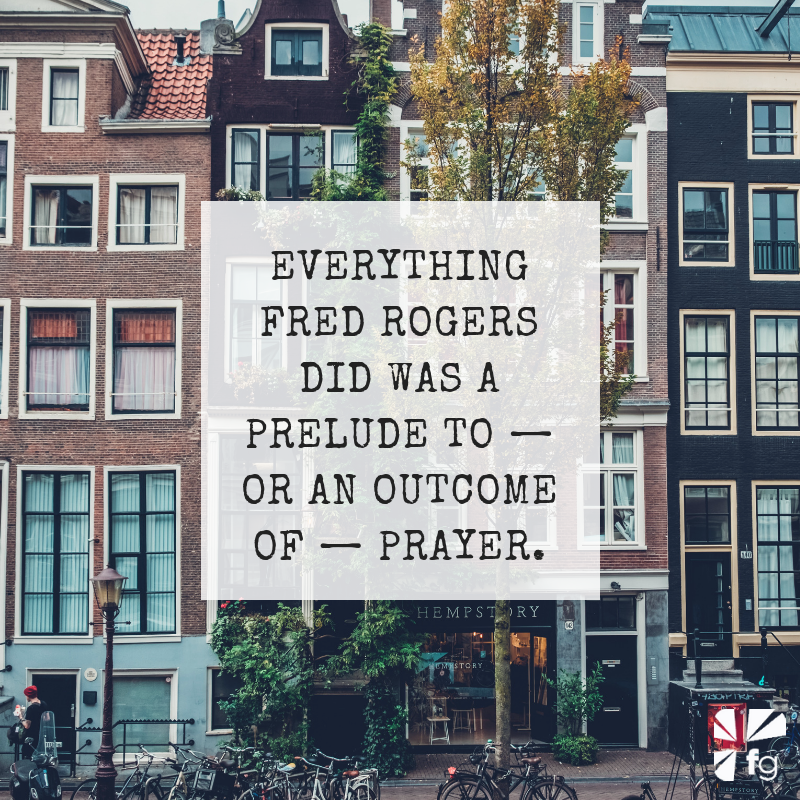 When I asked for your prayers, I didn’t mean to be vague about the need. ~ Fred Rogers, in a letter sent in spring 1995

The ritualistic tenor of Mister Rogers’ Neighborhood — the familiar wardrobe change in and out of comfortable clothes; the same opening and closing songs; the mixture of factory visits, make-believe, and perhaps a speedy delivery or two — was meant to make the children (and adults) who watched feel safe. When a young viewer expressed concern about whether he regularly fed the fish — she was blind and couldn’t see him doing it — he quickly added a vocalization to his routine to assure her of each fish feeding.

You always knew what to expect from Mister Rogers (“I like to be told,” he used to sing). The familiarity gave a sense of permanence, and permanent things could be depended on. Mister Rogers’ graying hair and diminishing stature were the only things that changed over the years. Even the curtains stayed the same. Everyday ritual was important. When Mister Rogers left, you knew he was coming back.

Fred Rogers’ real life included the same sense of ceremony. His daily routine was impeccably observed: he awoke at 5 a.m. for prayer, reflection, and Bible reading; took a 7:30 a.m. swim at the local pool (where he weighed in at exactly 143 pounds daily); followed his usual workday routine; and kept to a 9:30 p.m. bedtime. Even his diet had rite-like clarity: no alcohol and no meat.

It isn’t difficult to see why a man with this level of discipline would be able to cultivate an interior life that would inspire awe in others. He once asked me, “You know how when you find somebody who you know is in touch with the truth, how you want to be in the presence of that person?”

People felt that way about him. I’ve seen cameramen on assignment in the Neighborhood moved to tears by his kindness. One woman even remarked to her husband upon meeting Fred for the first time, “I think I just had a religious experience.” He had that unique, transforming presence: Mother Teresa in a cardigan.

Trailer: A Beautiful Day in the Neighborhood

It only takes one person to inspire a world of kindness. Based on the true story, #ABeautifulDayMovie in theaters this Thanksgiving from Sony Pictures

Of all his daily disciplines, the one that contributed most to this transforming presence was the one that began at five o’clock in the morning. Slowing down, taking time, and appreciating silence are all foundational aspects of the next toast stick he passed on to me: the importance of prayer. Each morning he prayed for his family and friends by name, still offering his gratitude for those on his list who had passed away.

His prayers didn’t end there but continued into his daily swim. Before diving into the pool, he would sing (out loud but not too loud) “Jubilate Deo,” a song Henri Nouwen had taught him from the Taizé community in France. “Jubilate Deo, jubilate Deo, alleluia (Rejoice in the Lord, rejoice in the Lord, alleluia),” he would sing and dive in. He emerged from the pool ready to face a new day with a fresh slate, as if wet from baptism.

The prayers continued into his workday: “When I walk in that studio door each day, I say, ‘Dear God, let some word that is heard be Yours,’” he told me during our first meeting. Not only were his spoken words on television a focus of prayer but also the numerous decisions that had to be made daily. “When I asked for your prayers,” he wrote in an early letter, “I didn’t mean to be vague about the need. I always pray that through whatever we produce (whatever we say and do) some word that is heard might ultimately be God’s word. That’s my main concern. All the others are minor compared to that. As you know in this business there are countless decisions every day (every hour!) and I solicit your prayers for guidance from above in all the decisions which must be made all the time.”

He continued his prayers when he ventured outside the studio. Sometimes he was invited to places in order to pray, as when he received an honorary doctorate (his twenty-fifth) from Boston University in 1992. The university had asked Fred to open the commencement ceremony with prayer. An older academic with a white beard rose to the podium to announce: “The invocation will now be delivered by Mister Fred Rogers.” Before he could finish, the five thousand graduates went wild, whooping and hollering out the name of the man they had grown up with, the man whose daily visits convinced them they were “special.” When Fred reached the podium, the tumult started again, cameras flashing throughout the crowd. How would he ever calm them down enough to pray? The answer seemed like the natural thing to do (to Fred at least). He leaned sheepishly into the mike and said, “You wanna sing with me?” And then chiding ever so slightly, “Why don’t you just sit down, and we’ll sing this song together.” And so together he and his legion of television neighbors began to sing — in perfect unison, because they all remembered the words — “It’s a Beautiful Day in the Neighborhood.” Waves of red robes swayed side to side, arms intertwined, subdued by the sense of security and ritual that Mister Rogers had always given them. He was their robed curate, and their congregational response, uplifting and reminiscent, led right into prayer.

“Dear God, please inspire our hearts to come ever closer to You,” Fred began, before praying for families, friends, and teachers. “We pray for… those people who know us and accept us as we are. Those people who encourage us to see what’s really fine in life.” Perhaps the graduates were thinking of Mister Rogers just then.

He moved from the particular to the general: “We pray for all the people of Your world, our sisters and brothers whose names we may not know but whose lives are ultimately precious in Your sight. With all our hearts, we pray for all Your children everywhere — yes, everywhere,” he said, emphatically stressing the last word.

After praying for others, he turned the prayers to himself and to the graduates: “And finally we offer our strengths and our weaknesses, our joys and our sorrows to Your never-ending care. Help us to remember all through our lives that we never need to do difficult things alone, that Your presence is simply for the asking and our ultimate future is assured by Your unselfish love. In our deepest gratitude we offer this prayer. Amen.”

Relationship, the Essence of Prayer

Everything Fred Rogers did was a prelude to — or an outcome of — prayer.

Volumes of books have been written on prayer, perhaps because it’s sometimes easier to read about it than to actually do it. But the essence of prayer is relationship, and Fred understood that. Even when he was explaining prayer to a young girl (I had asked him a question on her behalf about unanswered prayer), his seemingly simple explanation would enlighten even the most seasoned supplicant: “Now, you know prayer is asking for something, and sometimes you get a yes answer and sometimes you get a no answer,” he carefully explained. “And just like anything else you might get angry when you get a no answer. But God respects your feelings, and God can take your anger as well as your happiness. So whatever you have to offer God through prayer — it seems to me — is a great gift. Because the thing God wants most of all is a relationship with you, yeah, even as a child — especially as a child. Look how Jesus loved the children who came around Him,” he told her.

In another attempt to help children understand about prayer, Mister Rogers once took his television neighbors along for a visit to the Sturgis Pretzel House, founded by Julius Sturgis, in Pennsylvania’s Lancaster County. The baker explained to Mister Rogers and the viewers (my then-three-year-old son and I were watching that day) how monks long ago gave pretzels as treats to children who had remembered their prayers. The dough was rolled into strips and crossed, to represent a child’s arms folded in prayer (pretzel means “little arms”), and the three holes in the pretzel represented the Trinity.

Sometimes it’s the simple things that remind us: dough molded into pretzels serves as a gentle reminder to pray; bread sliced into toast sticks brings back memories of the kindness of friends who are no longer here.

Mister Rogers helped raise generations of young people to know that they were loved and that he always wanted as a neighbor “just like you.” He lived out his faith with the kindness and warmth of Jesus so that just listening to his theme song can bring a tear to the eye. We want to leave a legacy of love, prayer, and faith in Jesus. Let’s start today in prayer, in quiet, and go out rejoicing! Come share your thoughts with us on our blog. We want to hear from you!