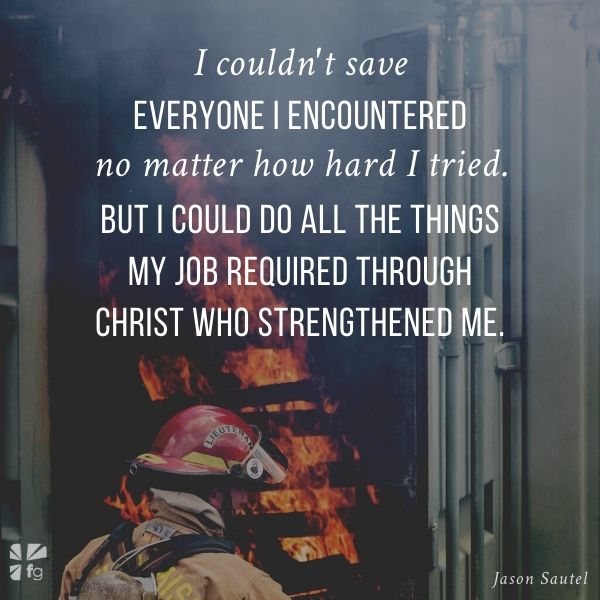 “You can do anything if you put your mind to it.”

I’m sure you’ve heard that inspirational saying. Maybe a guy at the gym quoted it, or maybe your wife has it written in cursive on a cute chalkboard she got at Hobby Lobby. Either way, I’m sorry, but whoever came up with that saying is a few tacos short of a combo plate. It sounds too good to be true because it is.

Here’s why I think that. I spent almost two decades as a firefighter, and a ton of that was in Oakland, California. Late one night — there were lots of times this happened, but I’ll stick to one example — me and my engine crew rolled up to a wooden house and saw it already fully engulfed in flames. From what the dispatcher had told us, there was at least one person trapped inside. I could see flames and smoke rolling out every window and the roof was already on fire. And, here’s the worst part, there were iron bars welded over every window and the front door was reinforced steel.

You better believe I “put my mind to it” on that call, and every ounce of my body’s strength. My whole crew did. But there was no happy ending. We did everything we could as fast as we could, and we still lost a life that night.

False Hope Is Worse Than No Hope

If you’re wondering why I’m going so heavy here, it’s because false hope can really hurt people. And telling them they can do anything if they work hard enough is just that: false hope.

False hope like that hurt me for many years.

When I was a kid, my parents sat me down and told me they were getting a divorce. They made it clear that it wasn’t my fault, but with those same mouths they told me that as long as I worked hard enough, I could make anything happen. Guess what I did? I tried to work hard enough to keep them happily married. When I failed, it left me hurt and confused. Hurt because my family had fallen apart, and confused because I was told I could rule my own little universe. Except I couldn’t. Maybe I hadn’t focused on the goal clearly enough, or worked hard enough. Maybe it was my fault.

As I got older, life became tougher. Since the doctrine of “you can do anything you put your mind to” was instilled in me at such a young age, every time I failed I felt like a self-inflicted loser. I tried to work my way to hope, reason my way to hope, and even pray my way to hope, but none of that worked. It was only later I learned that hope is something given to us in truth. And the truth is, we aren’t guaranteed to get the things we work for or ask for. As a classic guy who wants to fix everything — including myself — it’s hard for me to accept God’s will at times. It’s hard to accept that failure is part of life.

The crazy thing is, despite the obvious falseness of being able to do anything we put our minds to, there’s a Christian version of this false hope too. You’ve probably seen the verse Sharpied onto a quarterback’s cleats or quoted by a speaker at your church’s annual men’s retreat.

I can do all things through Christ who strengthens me. — Philippians 4:13 NKJV

If we take that God-inspired verse to mean that we can literally do all things, we’re just puffing ourselves up on false hope — and setting ourselves up for hurt or bitterness. And if we teach it to others, we’re selling something that stinks. The apostle Paul, who wrote that verse to the church in Philippi, wasn’t claiming he could do all things. He couldn’t snap his fingers and appear in every city in the world to preach the good news of Jesus. In fact, Paul failed multiple times. So we need to understand this verse in the context of the ministry God had called him to. He was saying that no matter the circumstances of his ministry — accepted or rejected, in plenty or in need — he could endure all things and continue to minister because Christ was continually strengthening him.

For a lot of years, my ministry was fighting fire and helping people. I couldn’t save everyone I encountered, no matter how hard I tried. In other words, I was a failure. But I could do all the things my job required — if I was rested or exhausted, safe or in danger — through Christ who strengthened me.

Now my ministry is sharing Jesus with people in a world that so desperately needs Him. I do it in person at my local churches through sermons, at retreats and conferences, and through books and the electronic world of social media. I do it by putting on my Scriptural goggles and looking for lessons in both the failures and accomplishments God has let me experience. As I do, I make sure to teach the difference between quitting and failing.

Failing and Quitting Are Different

Whether at the firehouse or a prayer group, I love hanging out with a group full of failures — myself being example numero uno! — because it reminds me of the difference between failing and quitting. Back in Oakland as a firefighter, I worked with some of the biggest failures God has ever created…but not one of them was a quitter. Imagine a pushup challenge to 200, and getting to 194 before dropping to the floor, the burning in your chest and arms too much to endure. You failed to reach 200, sure, but you never quit. Or thinking back to my opening story, we never quit trying to save whoever was in that house, even though we failed.

So let’s remember that we actually can’t do everything we set our minds to. We can’t do all things, even with Christ strengthening us. (Believe me, I’d love to lose weight and gain muscle by eating nothing but In-n-Out cheeseburgers and burritos, but even with the power of Jesus that ain’t gonna happen!)

Instead, we’re going to fail sometimes — and that’s okay. I love failures, and so does God, but I haven’t learned a whole lot from quitters. Let’s be inspired by something Paul wrote earlier in Philippians: “[O]ne thing I do, forgetting those things which are behind and reaching forward to those things which are ahead, I press toward the goal for the prize of the upward call of God in Christ Jesus” (Philippians 3:13b-14 NKJV).

You will fail, but you don’t have to quit!

How does the difference between failing and quitting hit you? What ministry has God called you to in this season? Remember the good news that you can’t do anything you put your mind to…and the even better news that you can do all things your ministry requires, without quitting, through Christ who strengthens you.

Original devotional from Jason Sautel, author of The Rescuer: One Firefighter’s Story of Courage, Darkness, and the Relentless Love That Saved Him.