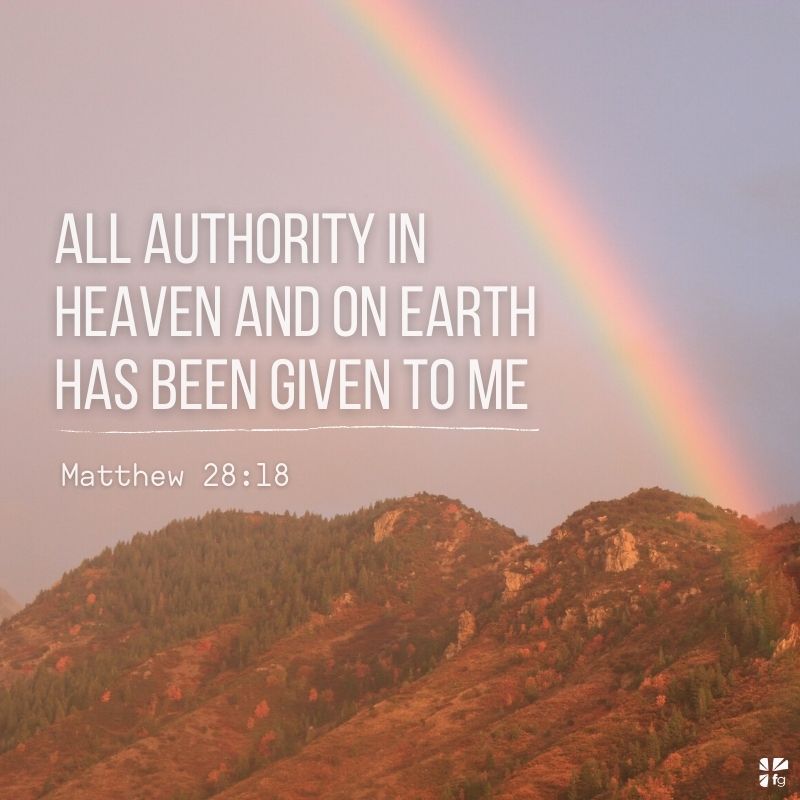 The phrase gets tacked onto the end of many prayers, but I think it has about as much meaning to us as “amen.” Amen does not mean, “That’s it . . . I’m done now,” the little period at the end of my prayer. Amen (ah-mane) is an ancient Hebrew word that was transliterated (kept virtually intact) into New Testament Greek. It is a pronouncement, firm and authoritative: “Yes! So be it! Let this be done!” Amen is a declaration; in that sense it is like a command. Or it once was; now it has the emotional force of “talk to you later” at the end of a phone call.

“In Jesus’ name” is even more of a command—far, far more declarative and final, like the drop of a judge’s gavel. We are using the authority of the ruler of all galaxies and realms to enforce the power of what we have just prayed. We have been exploring the way things work in effective prayer; as we look deeper into the spiritual realm, we discover that the whole thing runs on authority. It is the secret to the kingdom of God, and one of the essential secrets to prayer that works.

When Jesus had entered Capernaum, a centurion came to him, asking for help. “Lord,” he said, “my servant lies at home paralyzed and in terrible suffering.” Jesus said to him, “I will go and heal him.” The centurion replied, “Lord, I do not deserve to have you come under my roof. But just say the word, and my servant will be healed. For I myself am a man under authority, with soldiers under me. I tell this one, ‘Go,’ and he goes; and that one, ‘Come,’ and he comes. I say to my servant, ‘Do this,’ and he does it.” When Jesus heard this, he was astonished and said to those following him, “I tell you the truth, I have not found anyone in Israel with such great faith.” — Matthew 8:5–10

I’m guessing it took something pretty remarkable to “astonish” Jesus (he was astonished). Did you notice what it was? The centurion understood authority.

Just say the word from where you are, and my servant will be healed! I know, because I am under the authority of my superior officers and I have authority over my soldiers. I only need to say, “Go,” and they go, or “Come,” and they come. — Matthew 8:8–9 NLT

Remember—there is a way things work. If you run your hand along the grain of a 2×4, you’ll get a splinter. If you approach an elk upwind, you’ll spook him. If you turn a canoe sideways in the current, you’ll flip it. There is a way things work in the physical realm and we must learn to live with it; reality is one of the great tools of God to grow people up. (And he is deeply committed to growing us all up! Don’t forget that.) Children learn all the hard ways; the scraped knees, the burnt fingers. Wisdom is largely cultivated on encountering the laws of the physical world and adjusting our lives to accommodate. Better still, we learn to use those laws to our advantage—we cook with that heat; we build with that lumber.

The same holds true in the spiritual realm—there is a way things work. Like the children in a fairy tale, we have been thrust into a collision of kingdoms. Kingdoms are realms that are governed by a ruler (the king), and they operate on the basis of authority. Back in the story of Daniel and his three-week fast, the angel finally showed up and explained he would have been there sooner but he was blocked by the territorial spirit that held sway over the Persian kingdom. He eventually got through, but did you notice how? He brought in a higher-ranking angel:

“The prince of the Persian kingdom resisted me twenty-one days. Then Michael, one of the chief princes, came to help me, because I was detained there with the king of Persia. Now I have come . . .” — Daniel 10:13–14

The messenger got through the blockade because the mighty archangel Michael came and used his greater authority (and no doubt power). That is what we are doing when we use Jesus’ name—we are using his authority. A quick overview might help bring clarity:

God made the earth. He then gave it to Adam and Eve, along with authority to govern it:

The highest heavens belong to the Lord, but the earth he has given to man. — Psalm 115:16

The first man and woman—lord and lady of this earthly kingdom—forfeited their authority through their disobedience. That is how Satan became “the prince of this world” (John 14:30). When the evil one slithered up to Jesus in the wilderness and tried to tempt him out of the cross, he offered him the kingdoms of this world, as if they were his to give:

The devil led him up to a high place and showed him in an instant all the kingdoms of the world. And he said to him, “I will give you all their authority and splendor, for it has been given to me, and I can give it to anyone I want to. So if you worship me, it will all be yours.” — Luke 4:5–7

It was his to offer because we turned it over to him at the fall of man. “Prince” of this world means ruler of this world. And he has brought ruin and devastation through his malevolent reign, as Stalin did, as Pol Pot did. When an evil ruler comes into power, it allows evil into the kingdom. A man I knew was in Washington, DC during the inauguration of one of our less respectable presidents of the last century; he said that he could see demons rushing into the White House from all directions. Authority had shifted to darkness.

The epicenter of the tectonic shifts I keep alluding to was the coming of Jesus of Nazareth, Son of the living God—who became the Son of Man—to win it all back. He won it all back. Because the abdication of the throne occurred through the sin of Adam, it could only be undone through the atonement for those sins. Through his life of total obedience to the Father, through his perfect atonement for our sins by way of his cross and death, Jesus totally disarmed Satan and all those fallen angels like the Prince of the Persian kingdom:

[God] forgave us all our sins, having canceled the written code, with its regulations, that was against us and that stood opposed to us; he took it away, nailing it to the cross. And having disarmed the powers and authorities, he made a public spectacle of them, triumphing over them by the cross. — Colossians 2:13–15

For our struggle is not against flesh and blood, but against the rulers [arche], against the authorities [exousia], against the powers of this dark world and against the spiritual forces of evil in the heavenly realms. — Ephesians 6:12

By the cross our Father and Jesus caught the enemy totally off guard, undermined his claims, disarmed the authority of his stolen throne; the evil one and all his allies have lost their right to hold dominion, and that right has been given to Jesus:

[Who] humbled himself and became obedient to death—even death on a cross! Therefore God exalted him to the highest place and gave him the name that is above every name, that at the name of Jesus every knee should bow, in heaven and on earth and under the earth, and every tongue confess that Jesus Christ is Lord, to the glory of God the Father. — Philippians 2:8–11

All of this—the victory, the overthrow of Satan’s right to rule, the transfer of authority, power, and dominion to the Son of God—this is what Jesus was referring to when after his resurrection he said,

All authority in heaven and on earth has been given to me.— Matthew 28:18

Let that sink in; the relief of it will lift a mighty weight off your shoulders. All authority in the “heavens”—the spiritual realms—and all authority on this planet has been handed over to Jesus Christ! Think of the redemption that can now take place because of that one fact.

“Yes—that is my point,” you might say. “I believe Jesus won. So why don’t prayers work better than they do? Isn’t Satan defeated?” Stay with me now, because this has staggering implications for you and the way you pray. The invasion of the kingdom of God is something that is still unfolding, right now, today. Jesus is not merely seated upon a throne somewhere up in the sky:

Christ has indeed been raised from the dead, the firstfruits of those who have fallen asleep. For since death came through a man, the resurrection of the dead comes also through a man. . . . Then the end will come, when he hands over the kingdom to God the Father after he has destroyed all dominion, authority and power. For he must reign until he has put all his enemies under his feet. — 1 Corinthians 15:20–21, 24–25 (emphasis added)

That “until” gives us a very different way of understanding how Jesus is reigning at the current moment (and why world events still seem so chaotic). Are all his enemies under his feet? Clearly not; the verse says not, and the evening news illustrates it. Jesus, Son of God, Lord of angel armies, is “reigning until” he has finished what he began. The image that comes to mind is the terrible battle for the South Pacific in World War II. Island by island, bunker by bunker, tunnel by tunnel, a bloody battle had to be waged until the enemy was thoroughly and completely rooted out. Yes—we took the beach at Iwo Jima, and the airstrip. The enemy was defeated, but still he fought on; subduing the entire island was an unspeakably savage undertaking.

Much as you see in the world today. Oh yes, Jesus has won. But his kingdom has—obviously—not fully come on this earth. Which brings us to the famous model for prayer, held high by the church down through the ages, the “Our Father,” the “Lord’s Prayer.”

We Invoke the Kingdom

Our Father in heaven,
hallowed be your name,
your kingdom come,
your will be done
on earth as it is in heaven.
Give us today our daily bread. (Matthew 6:9–11)

Held high, repeated ritually, but rarely understood. Have you ever wondered why the Lord’s Prayer begins with us praying, “Your kingdom come . . .”? The man who knew best how to pray is telling us to invoke his kingdom. We are, after all, partners in this mission. And this is what he wants us to begin prayer with. The obvious implication is that his kingdom is not always come, his will is not always done on earth as it is done in heaven—or what a ridiculous thing to tell us to pray. Why would Jesus urge us to pray for something that has no meaning? He does not tell us to pray that the sun rises tomorrow; we are never urged to pray that the sun will rise again each day. God’s will is going to be done, every sunrise. You can rest on that one; nothing to pray about there. But you are told to invoke his kingdom, from heaven to earth.

Have you ever considered why we say ‘Amen’ and ‘In Jesus’ Name’ at the end of prayers? Does this explanation from John give you a fresh perspective now? Join the conversation on our blog! We’d love to hear from you about the power of praying in His name! ~ Devotionals Daily