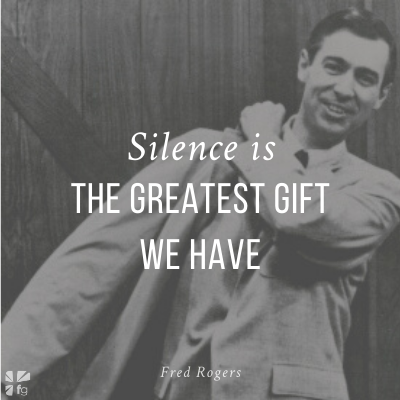 Editor’s Note: This week marks the release of A Beautiful Day in the Neighborhood, a film starring Tom Hanks & inspired by the life of the late Fred Rogers, known to many simply as “Mister Rogers” after his long-running children’s TV show Mister Roger’s Neighborhood. Author Jefferson Bethke highlighted Rogers’ life in a portion of his recent book To Hell with the Hustle: Reclaiming Your Life in an Overworked, Overspent, and Overconnected World, in which he challenges readers to embrace the slowness of Jesus.

In today’s selection, Bethke uses Rogers as an example of how revolutionary the practice of silence can be in our culture of noise and busyness. Enjoy’s today’s reading… and if you’re interested in more reading on Fred Rogers, check out The Simple Faith of Mister Rogers: Spiritual Insights from the World’s Most Beloved Neighbor.

When we think of famous rebels or revolutionaries or resisters from history, we tend to think about noise and violence, about warfare and a small band of militia fighters trying to take down an empire.

Not me. I think about Fred Rogers.

Of course, there’s the urban legend he was a Navy SEAL and wore those awesome cardigan sweaters to cover up full-length arm sleeve tattoos. But I don’t mean in that regard.

Mister Rogers was a rebel and revolutionary because of how different he was on television. I remember watching him as a kid and gravitating toward his peace and calm and secure quietness — maybe because I always had such a tough time with those exact things.

Looking back now, it’s astounding to think about what he did. How he predicated his show on calm, slow, methodical, and pointed talking. Yet silence and slowness are now treated like diseases to be eradicated. Television inherently calls for more noise and stimulation. The cuts and pace and music are intentionally nothing like real life. (If only punching someone would result in a POW! like the old Batman days.) In fact, especially during Mister Rogers’s era, I remember cartoons growing in noise, speed, and stimulation. Today most animated shows are an assault on the senses, causing violence to our more sensitive awareness. Attempting to entertain and stimulate via a metaphorical electric shock that ends up frying the more fragile parts of us.

Rogers knew that, and he knew it was creating a culture of buzz and anxiety. So he fought for the opposite.

Think of the boardroom fight that must have happened at least once or twice. Fred, you can’t be silent for ten seconds and say or do absolutely nothing on TV. That’s the equivalent of a year in television time! People will immediately turn it off.

But Rogers knew the difference. The media’s culture of noise is like giving someone meth or cocaine. It overstimulates, lies to your senses, and then something in you weirdly craves it again — even though before you experienced it you never realized you desired it.

The only way to fight something like that is with the anchored, deep, slow presence of silence.

Silence today is so rare, so undervalued, that it is an act of resistance.

Rogers would use that silence strategically. “Silence is the greatest gift we have,” he once said.1 And he fought for that silence everywhere.

He even had a ritual in which every meeting, spanning across decades, had to start with silence. He’d instruct his staff and team to take one minute at the beginning of the meeting to think of a person who had a positive impact on their life. And he’d watch the time and tell them when the minute was up.

One year he was invited to the White House for a conference on children’s education and television, where he met with Bill Clinton, Hillary Clinton, Al Gore, and the highest-level executives of PBS. And how do you think he started that meeting with some of the most powerful people in the world? With sixty seconds of silence during which they were told to think about someone who had an impact on them.2

He did the same thing when he accepted his Lifetime Achievement award at the 1997 Emmys. In the middle of his speech, he took off his watch, told the audience he’d keep the time, and led them in the very same exercise. He was leading not just the audience in the theater, but also the 18,744,000 people watching all over the country in the very same moment. And it was clear from the first second or two, when a few in the audience laughed or howled, they thought maybe he was just joking.

But he was serious.

It was the Emmys and millions were watching. One second of silence could easily lose those millions of viewers.

And then he lifted his wrist, and looked at the audience, and looked at his watch, and said softly, “I’ll watch the time,” and there was, at first, a small whoop from the crowd, a giddy, strangled hiccup of laughter, as people realized that he wasn’t kidding, that Mister Rogers was not some convenient eunuch but rather a man, an authority figure who actually expected them to do what he asked… and so they did. One second, two seconds, three seconds… and now the jaws clenched, and the bosoms heaved, and the mascara ran, and the tears fell upon the beglittered gathering like rain leaking down a crystal chandelier, and Mister Rogers finally looked up from his watch and said, “May God be with you” to all his vanquished children.3

I wonder how many that night truly experienced their first minute of intentional, deliberate silence.

That night, Mister Rogers also was reunited with Jeff Erlanger, a quadriplegic man in a wheelchair who had been on his show decades before as a kid. Mr. Rogers’s gentleness and tenderness in that moment is honestly one of the most real and beautiful moments I’ve ever seen on TV (if you have a few minutes, go watch it on YouTube). It’s when Mr. Rogers showed himself to be a resister and rebel all over again.

Here’s the truth we have to reckon with: slow or silent space doesn’t mean wasted space — no matter how much our world tells us it does.

Empty space does not need to always, inherently, be filled.

It can just be.

What would it look like if we were people who reclaimed spaces of silence as an act of resistance in our daily lives?

Trailer: A Beautiful Day in the Neighborhood

It only takes one person to inspire a world of kindness. Based on the true story, #ABeautifulDayMovie in theaters this Thanksgiving from Sony Pictures

“In returning and rest you shall be saved; In quietness and confidence shall be your strength.” – Isaiah 30:15

How does it make you feel to think of silence as a quiet rebellion? How can you begin to reclaim spaces of silence in your own life? We’d love to hear your thoughts in the comments!