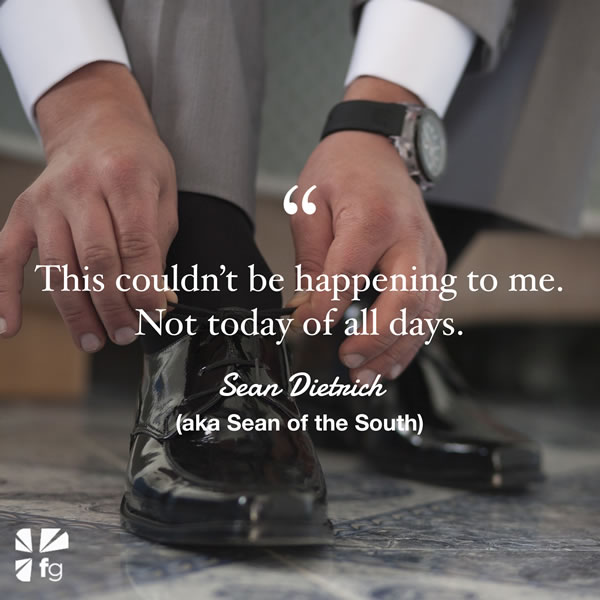 from Will the Circle Be Unbroken?

I showed up to my own wedding late. Which was only fitting for me.

Since childhood, my mother had always said, “I swear, child, you’ll show up to your own funeral thirty minutes late.”

Which is probably true. Of course, I hadn’t meant to be late. And in fact, I made it on time. But I realized I’d forgotten my rental tux and my rental shoes, so I had to turn around. I sped to my mother’s house. In my bedroom I found the tux on a hanger and a Ziplock on my bed. The bag contained my bow tie, cummerbund, cufflinks, and lucky red baseball socks.

I drove to the chapel ignoring every stop sign, traffic light, and innocent pedestrian.

When I neared the church, I saw the parking lot full of vehicles. Cars spilled out of the parking area, onto the church lawn, and onto the road. Some were parked in the ditches. My uncle had parked his RV beside the playground swing set. Cars stretched backward to the county line, and more headlights were waiting to get in.

These were Jamie’s people, from Brewton. They came by the hundreds and swallowed our little chapel like honeybees. In my truck, I bypassed the line of cars at the entrance by driving across the church lawn. My tires kicked up chunks of Baptist sod behind me. I skidded into a parking space and jumped out of the truck. My feet were bare.

My uncle stood on the curb looking at his watch. “We were beginning to think you’d had cold feet,” he said. “You scared us all.”

My future father-in-law came jogging toward me. He was a short man, with a jolly red glow on his face. “Thank God, you’re here. I almost formed a search party with dogs and everything.”

My uncle took the Ziplock bag from my hands and dumped it on the pavement. The two men rifled through the contents and got to work making me look pretty.

I slid on my lucky socks while my uncle adjusted my vest. My future father-in-law secured a bowtie around my neck while the usher placed cufflinks on my sleeves, and my wife’s cousin waved a lint roller over me.

“Are those baseball socks?” said my father-in-law.

“Yeah,” I said. “They’re good luck. I won the regional championship in these things a long time ago.”

“They smell like roadkill. When was the last time you washed ’em?”

When the men finished dressing me, I felt like I was wearing a straightjacket. I stood tall for their inspection. They brushed my shoulders, fixed my hair, and wiped smudges of barbecue sauce from my cheek.

“You look good enough to eat,” my uncle said. “But where’re your shoes?”

I collapsed on the curb and buried my face in my hands.

This couldn’t be happening to me. Not today, of all days. “They’re on my desk!” I said.

“On your what? You’re joking. You mean to tell me you forgot your own shoes?”

“Calm down,” said my father-in-law-to-be. “Don’t you have anything you can wear?”

I opened my truck toolbox. All I had were a pair of white rubber fishing boots. I put them on my feet and tucked my trousers into them.

“You can’t wear those!” shouted my uncle. “Not unless you plan on carrying a five-gallon bucket and a cast net down the aisle.”

“Hey, I’ve got an idea,” my father-in-law announced, removing his shoes. “You can wear mine.”

“Put those back on,” said my uncle. “You have Barbie feet. Your tiny shoes will never fit his big feet. Quick, someone go inside and find someone with feet as big as his.”

“What size are you?” said my father-in-law. “Twelve and a half,” I said. My father-in-law disappeared into the chapel. A few moments later, he returned with a man who bore a striking resemblance to Herman Munster, with feet like industrial barges. The man had to duck when he came through the doorway. He removed his shoes.

“What size are you, sir?” said my father-in-law.

So I placed the pontoons on my feet and laced them as tight as they would go.

My uncle almost wet his pants. “He can’t wear those things. He looks like Tickles the Clown.”

They escorted me into the church with careful steps, trying not to lift my feet too much. I moved with as much grace as a cross-country skier journeying across a frozen tundra.

The minister was waiting for me at the door. Before I joined him, my father-in-law pulled me aside one more time. He spit into his hand and fixed my hair. He stared at me in the face long and hard. He tucked a few folded hundred-dollar bills into my pocket and touched my cheek. “You’re a good boy, you hear me?”

Which is Alabamian for “I love you.”

“Don’t cry,” he said. Then he smacked my shoulders. “You’re one of mine now.” Then he started crying.

Next, my uncle came to me. He hugged me hard, looked me square in the face, and in a reverent voice said, “Make sure you leave before sunrise tomorrow morning—you wanna make good time.”

I joined the minister at the altar. When the organ played, the audience stood, the doors to the chapel were flung open, and there she was, the rest of my life in a dress. Her hair was dark; her skin was milk. She walked the aisle with her father. She was the image of everything I have ever needed. Beauty, kindness, honesty, and humor. Always humor. And I belonged to her.

The minister asked who gave the woman away. My father-in-law shouted, “Her mother and me!”

My bride hooked arms with me, and in a voice so sincere and true, she whispered, “What in God’s name is on your feet?”

There has never been a day that outranked the one I just told you about. And I don’t think there ever will be.

We’d love to hear your humorous wedding stories! Comment below. 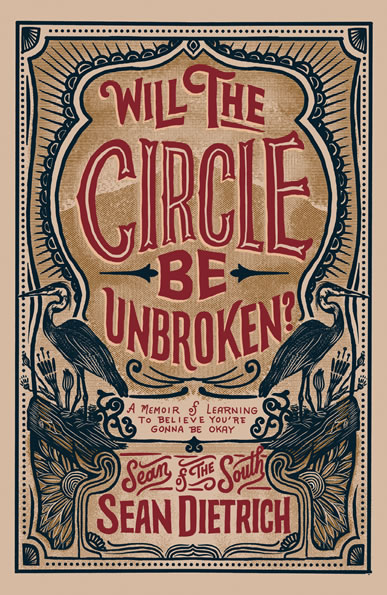