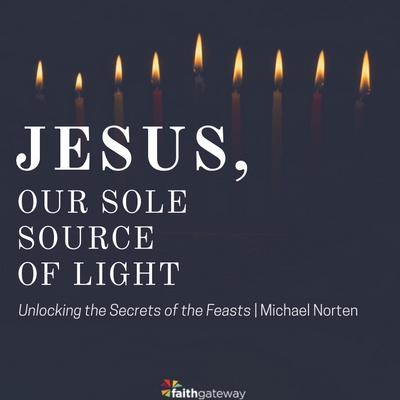 Everyone has some awareness of the holiday called Hanukkah, because of its proximity to Christmas. You hear people say, “Merry Christmas and Happy Hanukkah”. Many Jews even exchange gifts within their respective families, primarily with the children because of the influence of Christmas. As we all know, it is very much a Jewish celebration, but should it have any interest or significance for Christians?

The purpose and the traditions of this festival are so intriguing, that Christians should appreciate Hanukkah more than a passing acknowledgment of the season. Jewish celebrations are packed full of meaningful rituals and observances, which serve as wonderful illustrations of spiritual truths.

When the traditions point in someway to Jesus, Christians should especially take note.

Unlike the seven annual feasts or festivals of Passover to Tabernacles, Hanukkah was initiated by humans themselves, rather than God. The seven Biblical feasts in Leviticus 23 are called “the Lord’s appointed times”. Hanukkah on the other hand was created in the mind of man. This by no means should minimize the significance of the observance, because it is honoring God. After all, we celebrate Easter, Thanksgiving and Christmas, which were all established by man as very important and meaningful holidays.

Hanukkah is a holiday that lasts eight days to remember and celebrate two important happenings in history that were really connected in one major event. The first was the victory that the Hasmonean Jews had over the Syrian Greeks in a revolt led by the Maccabean brothers in 164 B.C. The second event, which is also the primary event in the remembrance, is the eight days of the cleansing and rededication of the temple after the Gentiles had desecrated it.

Daniel 8:9-12, Daniel 8:23-25 and Daniel 8:11:21-35 prophesied that a leader would rise up and cause persecutions to those living in Israel. This man was Antiochus IV Epiphanes, who was a prefiguring of the coming Antichrist of the last days. He did many deplorable things, such as prohibiting the Jews from practicing their laws, and in addition to that, he sacrificed a pig on the altar. Antiochus even erected a statue of Zeus right outside the temple. He demanded that the Jews worship his false god. He even killed the Jews if they refused to eat pork. One can understand why he is called a despicable person in Daniel’s prophecy.

A priest by the name Mattathias with the help of his five sons started a revolt and was successful. After the victory of the Maccabean revolt, one of his sons, Judas Maccabeus, led a project to cleanse the temple and refurbish it. According to the Talmud there was a miracle that happened at the time they celebrated the cleansing. In tractate Shabbat 21b it reads,

“What is the reason of Hanukkah? For our Rabbis taught: On the twenty-fifth of Kislev commence the days of Hanukkah, which are eight on which a lamentation for the dead and fasting are forbidden.  For when the Greeks entered the Temple, they defiled all the oils therein, and when the Hasmonean dynasty prevailed against and defeated them, they made search and found only one cruse of oil which lay with the seal of the High Priest, but which contained sufficient for one day’s lighting only; yet a miracle was wrought therein and they lit the lamp therewith for eight days. The following year these days were appointed a Festival with the recital of Hallel and thanksgiving.”

From then on the Jews called this festival the Festival of Lights. To this day Jews focus on the cleansing of the temple and the lighting of the menorah. The menorah has nine candlesticks. The one in the middle that is elevated above the others is called the “shammus”, which means “servant”. On the first night the servant candle is used to light the first candle on the far right. Before the first candle is lit, three blessings are recited:

Before each subsequent candle lighting, only the first two blessings are recited. On the second night the servant candle is used to light the first candle again and then the second one next to it. This procedure is repeated each night until all eight candles are lit.

The miracle according to tradition is interesting, but there are other elements Christians need to appreciate that are even more applicable today. The first application we should take notice is that “eight” in the Hebraic numeric system points to a “new beginning”. This is very poignant to the Christian, because it reminds us that, after we are cleansed by the blood of Christ at salvation, we have a new beginning as the temple of the Holy Spirit and a new life in fellowship with our Lord Jesus Christ. Secondly, it is fascinating that the middle elevated candle is called the “servant” that brings light to the other candles. It reminds us of the messianic prophecy of Isaiah 53, where the Messiah is called the Servant.

Jesus, our Messiah, is our sole source of light.

Another very interesting fact about Hanukkah is when it is observed on the calendar, which is the time of year that the nights are the longest, in other words, the darkest time of the year.  In my book, Unlocking the Secrets of the Feasts, in the chapter about the Feast of Tabernacles, I explain in detail the evidences that Jesus was born during the time of the Feast of Tabernacles and conceived in the timeframe of Hanukkah. The evidences are derived from the Gospel of Luke and the Hebraic calendar. The Feast of Tabernacles, which looks forward to the Messiah dwelling or “tabernacling” with mankind in the future Kingdom, is called the “Show of Lights”, whereas Hanukkah is called the “Festival of Lights”. When Jesus declared that He was the “Light of the World”, He had those two festivals surrounding the event of His birth as bookends.

Finally, when we see the progressive lighting of the menorah getting brighter each evening, Christians can remember that we shine more and more of Christ’s light each day as we grow and walk in His light.

Original by Michael Norten, author of Unlocking the Secrets of the Feasts for FaithGateway and Devotional Daily.

This year as we wish our Jewish friends Happy Hanukkah, we can remember that Jesus is the Light of the World! Did you learn anything new about this beautiful Jewish holiday? Come share your thoughts with us on our blog. We would love to hear from you! ~ Devotionals Daily