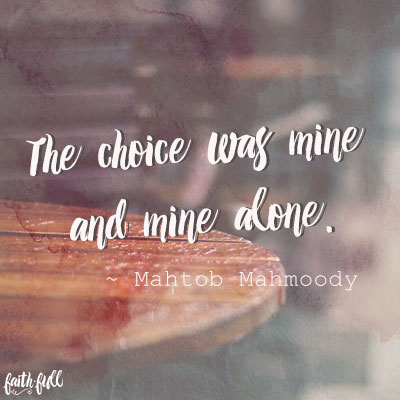 Mere days before Mom was to leave for the States, an ambulance arrived at our apartment to take my dad to the hospital where he was employed as an anesthesiologist. because of the war, the purchase of automobiles was rationed. We did not have a vehicle, so when his services were needed he was driven to the hospital by ambulance.

In the days preceding he had become increasingly violent and suspicious of Mom’s every move. and he was right to be suspicious. Just that morning he had unknowingly thwarted our most recent escape plot.

Through the shopkeeper, Mom had met a man who had dedicated himself in earnest to helping us. Over the months he had staged several well-intentioned but unsuccessful escape attempts. That morning, as Mom walked me to the bus stop, someone was supposed to snatch us off the street. But my dad, throwing one of his customary tantrums, had taken me instead. Now he refused to go with the ambulance, even though there was a woman visiting who said she would stay with us until he returned. There was no way he was letting us out of his sight.

The ambulance driver was insistent, though, and my dad reluctantly gave in to his urging. This must have been an uncomfortable exchange for our unsuspecting visitor. The woman, who had been thrust into the unsought role of prison guard by my father, had a daughter around my age. We played on the floor while our moms sat on the couch making small talk.

Shortly after my dad left, Mom excused herself and went upstairs. She was gone for what felt like an eternity.

One thing both of my parents agreed on was the importance of being a good host. My anxiety grew as the minutes passed and Mom hadn’t returned to sit with our guests. I shot furtive glances towards the stairs hoping to see Mom emerge. Finally I, too, excused myself and ran to see what had happened.

Mom was in her bedroom frantically shoving items into a giant purse. I climbed onto the stationary bike at the end of the bed and watched as I pedaled. I was confused. We had guests in the house. Why was she not visiting with them? Mom brushed off my concerns and shooed me back downstairs to announce that she would soon follow.

When at long last I spotted Mom tiptoeing down the stairs, I was greatly relieved, until I realized she was carrying the bag I had just seen her pack. My dad wasn’t the only one whose suspicions were growing.

During our entire time in captivity, Mom and I had been a team. We had counted on each other and had trusted each other implicitly. We had kept no secrets from each other. But now, all of a sudden, I could tell she was hiding things from me, and I didn’t like it. Maybe my dad was right. Maybe I couldn’t trust her anymore. Maybe she really was abandoning me to go back to America.

“We’ve been invited to dinner this evening,” Mom briskly announced to our guests, “I need to go buy the flowers.” There may have been a war going on, but when someone was invited to dinner, it was unconscionable to show up without a bouquet of flowers.

“That’s no problem,” she offered graciously. “I’ll drive you.”

Our guard was a gentle woman, and she suspected nothing. To her, going to buy flowers was an established custom. There was no reason for her to question.

When we pulled up to the curb directly in front of the flower shop, Mom motioned for me to get out of the car. “Thank you,” she said to the woman. “We will walk home.”

They went on like this until finally Mom leaned over and hugged her, saying, “thank you for everything.” I wonder sometimes if, in that moment, the woman may have understood. If she did, she gave no indication. Mom stepped out of the car and took me by the hand. We walked toward the flower shop, and our gentle guard drove away.

There was a pay phone at the corner, and as soon as the coast was clear, Mom turned and sprinted for the booth. She dialed the familiar number and waited impatiently for the man who was helping us to answer. There was a resolute desperation in her voice when she whispered into the receiver, “I have Mahtob. I’m out of the house, and I’m not going back.” There was a pause as Mom listened to his response. Her eyes darted nervously about, scanning for any signs of danger.

There was no plan in place. The man who was helping us wanted us to return to our apartment and wait while he tried to organize something. Mom argued back. There was no time to wait. We might not get another chance. Every day my dad insisted even more vehemently that Mom’s days were numbered. At that point it was immaterial whether he locked her in the basement to die, killed her outright, or forced her onto a plane bound for the United States. It was clear that time was of the essence.

The man knew our situation well, and he understood the urgency in Mom’s voice. He had no reason to help us except that his heart was filled with compassion. He had no responsibility to us except that we were fellow human beings who were suffering a cruel injustice. Despite his initial hesitation, he gave Mom an address and said he would meet us there.

Returning the receiver to its cradle, Mom knelt to talk with me. She looked me straight in the eye, and I knew instantly that I had been foolish to doubt her intentions. She was not leaving me. She was fighting harder than ever to find a way for both of us to escape.

“Mahtob, we may have an opportunity to go home. Do you want to go home?”

“But if we leave now, I don’t know when or if you’ll ever see your daddy again.”

As her words sank in, tears filled my eyes. I tried to hold them in, but they spilled over and rolled down my cheeks. My shoulders rose toward my ears as I fought to control the sobs that were building inside.

“I will understand if you want to go back to your daddy,” Mom offered with loving sincerity. “It’s okay if that’s what you want. But if we go back now, I don’t know if we’ll have another chance to go to America.”

“I want my bunny.” I finally managed to utter between gasps. “I want my bunny.” I wasn’t concerned about my dad. I wanted more than anything to be free of him. But aside from Mom, my bunny was my closest companion. I couldn’t just leave him behind.
I could see in Mom’s eyes that she understood how much my bunny meant to me. She thought carefully before responding. “If we go back to get him, we won’t be able to get out of the house again. If you want to stay here, that’s what we’ll do. If we’re going to go to America, we have to leave your bunny. When we get home, I’ll buy you a new one.” She let the options sink in before she asked for my decision. “What do you want to do?”

The choice was mine and mine alone.

It was a bitter decision to make. I wanted my bunny, and I wanted to go home to my brothers and my grandparents and aunts and uncles and friends. More than all of that, I wanted to get away from my dad and his threats, his beatings and the terrifying sound of his angry footsteps. I wanted to go home where I could go to sleep at night and know no bombs would fall under the cover of darkness. I wanted to go to a school with no more marching, no more stomping on my flag, no more screaming, “Maag barg Amrika.”

I was too emotional to form the words.

“Do you want to stay here?”

Silently, I shook my head.

Tears streaming down my face, I nodded resolutely.

Excerpted with permission from My Name Is Mahtob: The Story That Began In The Global Phenomenon Not Without My Daughter Continues by Mahtob Mahmoody, copyright Mahtob Mahmoody.

Mahtob and her mother, Betty, left Iran in terror. In her story, she shares how she went from being a wounded soul to being healed by faith in God’s goodness and in His care and love. And, in growing in her faith, she learned to forgive the father and find joy and peace. Come share with us your thoughts on our blog. We would love to hear from you! ~ Faith.Full