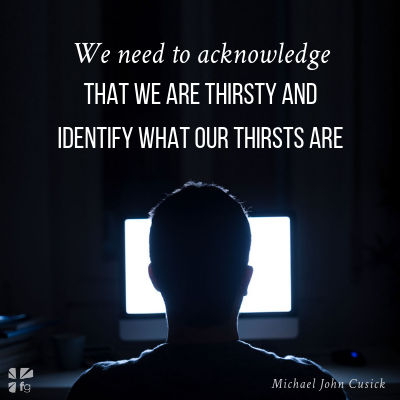 Whenever I ask a man to make a list of what his soul is thirsty for, I may as well be speaking Cantonese. Early in my own healing journey, my counselor encouraged me to talk about my longings. It was like trying to describe gravity. So to give men a place to start, I explain that people generally share seven core thirsts. Though this list is not exhaustive, it offers a straightforward way for you to begin to put words to what lies below the surface of your life:

All of these core thirsts are God-given appetites and longings. When they are suppressed, cut off, or shut down, we resemble an Indy car running on four cylinders. Because of this, we fail to live from our hearts. To run on eight cylinders, we need to acknowledge that we are thirsty and identify what our thirsts are. Why? Because only when we identify them will we begin moving toward those desires according to God’s design.

Once you have identified your deepest desires, you can begin understanding why pornography is so alluring. You can see beyond the easy rationale of your body’s libido to the underlying longings of your soul. The sexual images and experiences you crave represent the fulfillment of one or more of your seven core thirsts: to be seen and valued, to feel affection and love, to be affirmed in your manliness and desirability, and so on—or at least they offer the illusion of all this in the moment.

Lust is the Outcome of Disordered Desire

After counseling people for more than twenty years, I’m convinced that there are only two kinds of people in the world: people who eat chocolate cake for breakfast and wish they hadn’t, and people who shudder at the thought of chocolate cake for breakfast but should probably try it. In other words, there are those of us who demand that our desires be satisfied, and those who disown our desires. Speaking to that second crowd, no doubt, Jesus addressed the issue of lust. “You have heard that it was said, ‘Do not commit adultery.’ But I tell you that anyone who looks at a woman lustfully has already committed adultery with her in his heart” (Matt. 5:27–28). The Greek word for “lust” in that passage is epithumeo, which means “to set the heart upon” or to “intensely desire.”

Yet when Luke recorded Jesus’ words as He broke bread with His twelve disciples at the Last Supper—“I have earnestly desired to eat this Passover with you before I suffer” (Luke 22:15 ESv, emphasis added)—he used the same word, epithumeo, that Jesus used to describe lust. Was Jesus lusting? Yes. Was Jesus sinning? Of course not. He was deeply in touch with the deep and godly desires in His heart.

Through the centuries, theologians and philosophers have referred to lust as disordered desire. Such a definition is extremely helpful in understanding Jesus’ two uses of the word for lust, as well as clearing up our own misunderstandings. Disordered desire results from desires that are disowned, demanded, or misplaced.

Disowned desire usually results from shame or pain. In high school, I told my Young Life leader that I was fervently praying, asking God to take away my sexual desires. They were just too strong. I actually thought God would be pleased if I became sexually neutered until I got married someday. With great wisdom and grace, my leader assured me that my sexual desires were a gift from God. To me they felt more like a curse; not unlike the feeling described by Frederick Buechner in his novel Godric: “Lust is the ape that gibbers in our loins. Tame him as we will by day, he rages all the wilder in our dreams by night. Just when we think we’re safe from him, he raises up his ugly head and smirks, and there’s no river in the world flows cold and strong enough to strike him down. Almighty God, why dost thou deck men out with such a loathsome toy?”1

Ambivalence over what feels like a loathsome toy of desire is a primary way that many men disown their sexual urges. Over the years, countless men have described to me their sexual desires as a part of them for which they feel both gratitude and contempt. They find it refreshing, then, when they learn that their desires are not too strong, but too little. C. S. Lewis hit the bull’s-eye: “Our Lord finds our desires, not too strong, but too weak. We are half-hearted creatures, fooling about with drink and sex and ambition when infinite joy is offered us, like an ignorant child who wants to go on making mud pies in a slum because he cannot imagine what is meant by the offer of a holiday at the sea. We are far too easily pleased.”2

The problem with lust is that we’ve thrown the baby out with the bathwater.

Think about it this way. Suppose you have just finished a hard day of cycling or hiking in the heat of summer. Extremely thirsty, you return to your vehicle and grab the water bottle you packed earlier that morning. You are aware that the water in your container is comprised of countless molecules, each containing two hydrogen atoms and one oxygen atom. For some reason, you decide that you will only swallow the oxygen atoms and not the hydrogen atoms. Despite your best efforts, you can’t do it because the two hydrogen atoms and the one oxygen atom cannot be separated. To separate them would mean you would no longer be drinking water, but something else. A man trying to suppress his lust is like someone trying to drink only the oxygen atoms.

Demanded desire is the opposite of disowned desire because we demand relief from the pain of unmet thirst. As broken and self-sufficient men, we reflexively seek relief for our unmet thirsts by moving in a direction away from God. God described it this way: “My people have committed two sins: They have forsaken me, the spring of living water, and have dug their own cisterns, broken cisterns that cannot hold water” (Jer. 2:13).

Longing for the comfort of being held in a woman’s arms is quite different from demanding that comfort. When we demand that our desires be satisfied, we turn people into objects and end up using them—at cost to our own souls and the woman’s dignity. When we demand, we leave no room for love because we go from being lovers to consumers.

In our world today, if you want a movie, song, or video, you just press a button on one of your many hi-tech devices and—voilà!— there it is, on demand. But our souls weren’t designed to work this way. In fact, in The Great Divorce, C. S. Lewis described hell as a place where people have no needs because they can get whatever they want just by imagining it—on demand!3

Disordered desire can also be misplaced. When we misplace our desires, we direct our hearts toward something that takes the place of God’s good gifts. It’s the craving for ice cream when you feel depressed or the lust for porn when you are lonely. Larry Crabb explained it well: “When pleasures of any kind are used to satisfy (or at least to quiet) our crucial longings, then the craving for what only God can provide becomes a demanding tyrant driving us toward whatever relief is available. Our god becomes our appetite. Crucial longings meant to create a panting after God energize our addiction to whatever feels good for a moment.”4

How does it help you to know that desire is not what’s at issue when you face temptation? How can you begin to follow God’s invitation to “desire more deeply”? We’d love to hear your thoughts in the comments!