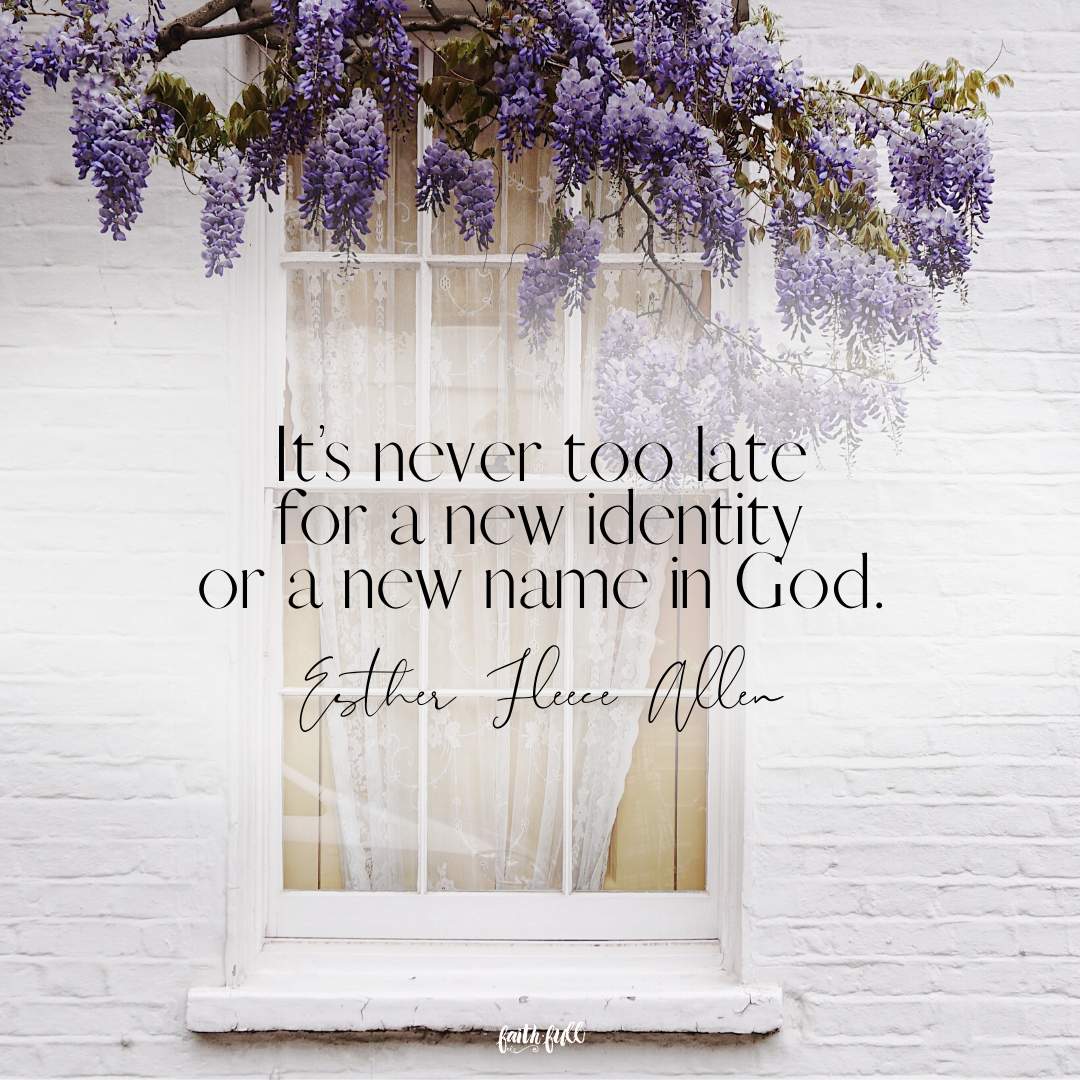 For years, I didn’t really know the significance of the name that had been chosen for me. Similarly, I’m afraid we have lost the significance of naming in our culture today. Many of us don’t appreciate the power inherent in names that confer meaning and value.

That wasn’t true of those we meet in the biblical story. The vast majority of the time, the meaning of a name in the Bible was significant. Some names, like Uzziah (2 Chronicles 26), were a creedal statement: “Yahweh is my strength.” Other names, like Joshua, made a statement about God: “Yahweh is salvation.” Some names functioned as prophecy (Hosea 1:4-11), and some were familial or spoke to physical circumstances. Many biblical accounts explain the meaning of a person’s name, and those names were significant to who those individuals were or who they were to become.

In Jewish tradition, a child’s name was revealed in the same ceremony in which they were circumcised, a sign of the covenant. God’s ancient people knew that a good name is to be esteemed more than silver or gold (Proverbs 22:1).

One of my best friends, Sally, named her son Cross. To this day, it is one of my favorite boy names. Sally knows the value of the cross and the price Jesus paid for us through His death and resurrection. As a mom with the power and authority to name, she chose the name Cross so that her son’s name would speak of the most important event in human history. Cross’s name is an example of how a name can carry weight and meaning.

Maybe you weren’t assigned an awesome name like Cross’s at your birth but were given a pretty remarkable and meaningful name when you became God’s child.

When we become followers of Christ, God makes each one of us a new creation (2 Corinthians 5:17). He has made us to be ministers of a new covenant (2 Corinthians 3:6). Often this newness is evident in our lives. We are empowered to pursue new life in Christ. He helps us clean up our language and make it new. God cleans up our hearts and makes them new. In many areas — from relationships to the ways we use money — we release the old way of doing things and embrace a new way. We understand what it means to be made into new people, but rarely do we pay attention to our new name.

Did you know that all of us who are in Christ have been given a new name?

When we become a Christian, we immediately bear Christ’s name. Luke teaches that “the disciples were called Christians first at Antioch” (Acts 11:26). Later in the first century, Christians were called followers of “the Way” (Acts 9:2).

The word often translated “new” in the New Testament is the Greek word kainos, and it means “new and fresh.” HELPS Word-studies tells us that kainos means “fresh in development or opportunity — because ‘not found exactly like this before.’”1 Some of us hear that when we are in Christ, we become new creations (2 Corinthians 5:17), or we look forward to the new bodies we will get in Heaven (2 Corinthians 5:2). Or we are familiar with the term “new covenant” (Jeremiah 31:31; Hebrews 8:13; Hebrews 9:15; Luke 22:20), found in both the Old and New Testaments. But why isn’t anyone talking about our new name?

When we know our new name, we are remade as we live into the power of that name, and we’re no longer identified by the circumstances we’ve come from. We are made new as we’re reidentified by our relationship to God, and along with that comes a new name.

While a label can group us with other people, an individual name sets us apart. There may be fifteen hundred or fifteen thousand people who work at your company or organization, but your name badge, your email address, and your paycheck confirm that you are you. While you may share a name with others, your name is part of who you are and makes you distinct.

Many of us have incorrectly taken on labels as our names. Maybe we have been labeled a “loser” or a “dropout” or “un- employed.” Maybe we’ve labeled ourselves “unattractive” or “over- weight” or “undesirable.” But God doesn’t settle for labels that limit. Instead, He gives us names that call us into a new identity that He has crafted just for us — names with meanings and names that speak to who we will become. God sees us individually, has good plans for us individually, and wants us to have a distinct name, purpose, and calling. I wonder if mislabeling yourself has prevented you from knowing your new name.

What is most true about us is that when we become Christ followers, we take on the new name of “Son” or “Daughter.” God planned our adoption as sons and daughters through Jesus Christ, and it was His pleasure and will to do so (Ephesians 1:5). This means that if you are a follower of Jesus, you are a child of God with a new name. To all of us who receive God, and to those of us who believe in His name, He gives the right to become children of God (John 1:12). Previously I was an orphan, but now I have the name of “Adopted.” I exchanged the label “orphan” for the new name of “Daughter,” and it has made a world of difference.

It takes time to learn to live out of our new names, and there are more names for us than “Son” or “Daughter.” Some followers of God in the Bible were renamed completely — Abram to Abraham, Sarai to Sarah, Jacob to Israel. A few of us may receive a new name in that way, and we’ll take a look at their stories throughout the book. Others of us may keep our physical name while receiving a new spiritual name that empowers us to live the life God has for us to live.

Some of us will be renamed according to who God is calling us to become. Some folks in the Bible were being called to live into their new identities as followers of Jesus. Men like Andrew, James, and John received not a new physical name but a new identity when they were called away from fishing for fish to fishing for people (Matthew 4:19). Others — like Simon, whose name became Peter — received a new name. What is consistent is that after they met Jesus, they were known as “Fishers of People,” and this spiritual name changed how they lived here on earth.

Beyond the shared names that God gives to everyone in His family and the names we get when we partner in the mission of God, God also gives names that are unique to our personal circumstances.

How about you? What were you before you met Christ? Were you a rebel? Were you mistreated? Were you suffering? Were you forgotten? What labels have limited your life? What false names assigned by others have held you back?

If you don’t know yet, that’s okay. I’ve prayed that you will discover any new name that God has for you as you read and finish this book. There’s no pressure on you, because this new name is given, not earned. Your new name has value, even before you recognize or become aware of it, because of the One who gives it to you. So relax. You can receive a new name from God in a variety of ways you’ll discover in these pages.

God’s name for you is not some elusive secret that only “super” Christians figure out in this life. No, God’s name for you is the truest thing about you. It is core to your very identity. Your name may be several names that God speaks throughout Scripture. Knowing your new name makes it personal to you.

For every label that limits you, God speaks your true name.

Maybe you’ve been told you’re shy or introverted, and this has made you unhappy about the way you engage with others. God may want to encourage you that the way He has wired you is not a mistake. Maybe you’ve felt chained by your past, but God wants to name you “Free Indeed.” Or maybe you’ve struggled to feel like you belong. God may want to name you His “Beloved Child” and affirm to you that the applause of others is not an indication of His pleasure with you.

Learning our new names isn’t always about receiving a divine word through some mystical experience; rather it more often than not is about learning to trust the voice of God that has been speaking over our lives all along.

And I want you to hear that these names are for every child of God. Perhaps you feel like you don’t deserve a new name because you haven’t walked perfectly with God, but that is not God’s voice. God is constantly in the business of making us new. We will be called many names here on earth, but it’s important to reflect on whose voice we are listening to. Have you taken time to listen to what God says about you?

There are many labels in life that limit us — labels assigned to us by our circumstances, our past, our deficiencies, the things others say about us, the backgrounds we come from, and the lies we believe. We’ll look at many of these labels throughout the book to help you identify what you are not, because no matter who you are or what kind of life you’ve lived, God has a new name for you.

You may be seventy or even eighty years old and feel like you’ve missed the opportunity to be renamed. Not so. God is always wanting to do a new and fresh thing inside us, and it’s never too late for a new identity or a new name in God. New names and words are available to us as God’s children — at any and every point in our walk with Christ — and we can know them, access them, and live out of them.

Are you held back by false labels others put on you? Did people speak over you in ways that you felt stamped a name on you and defined you? What does God say about you instead? Come share with us on our blog. We want to hear from you! ~ Laurie McClure, Faith.Full