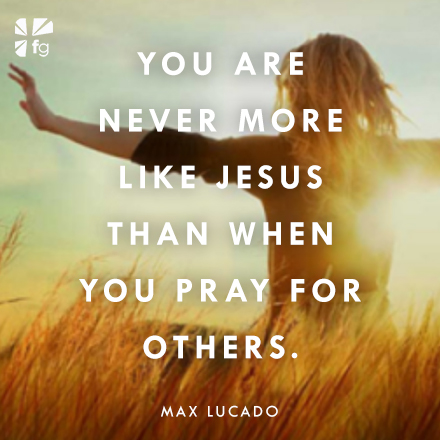 You sit in an ER waiting room, surrounded by an anxious family. You rushed here the moment you learned of the accident. The teenage son of your neighbor was injured in a car wreck. He is in surgery. Your friends are in shock. You’d do anything for them. But what can you do?

You try to conceal your shock at the news. Your friend’s teenage daughter is pregnant, confused, and considering an abortion. Your friend blames herself. “If only… ” What can you do?

You sigh at the images on the TV screen. Yet another tornado strikes another city. Schools are demolished, houses destroyed, and lives lost. Such devastation. But what can you do?

What can you do? When the challenge is greater than you are. When the hurt is palpable. When you feel helpless and impotent. Where can you turn? I suggest you turn to one of Jesus’ most intriguing teachings about prayer.

Suppose you went to a friend’s house at midnight, wanting to borrow three loaves of bread. You say to him, “A friend of mine has just arrived for a visit, and I have nothing for him to eat.” And suppose he calls out from his bedroom, “Don’t bother me. The door is locked for the night, and my family and I are all in bed. I can’t help you.” But I tell you this — though he won’t do it for friendship’s sake, if you keep knocking long enough, he will get up and give you whatever you need because of your shameless persistence.

That’s you ringing the doorbell at midnight. The neighborhood is quiet. The streets are still. The sky is dark, and so is your friend’s two-story house. But still you ring his doorbell, not once or twice but three times. Ding-dong. Ding-dong. Ding-dong. It’s a big house, so it has a big chime. His Chihuahua wakes up. He has this snappy, who-do-you-think-you-are bark: “Ruff, ruff, ruff.”

You envision what is happening upstairs. Your friend’s wife is giving him a kick beneath the blankets. “Hank, get up! Someone is at the door.” Poor guy. One minute sound asleep. The next, kicked out of bed. Doorbell ringing, dog barking. He’s not going to like this.

The porch light comes on. The door opens. Boy, does he look like a mess. Boxer shorts. T-shirt. Bed hair. Face lined with pillow creases and covered in whiskers.

“What in the world are you doing here?” he asks.

“A friend of mine has just arrived for a visit, and I have nothing for him to eat,” you answer. The home owner grumbles and complains, but you insist. “Come on, Hank, please.” Finally Hank acquiesces, invites you in, and takes you to his pantry. You fill a basket with food and take it home. And your surprise guest doesn’t have to go to bed hungry. All because you spoke up on behalf of someone else.

This is intercessory prayer at its purest, a confluence of paucity and audacity.

Father, You are good. They need help. I can’t, but You can.

This prayer gets God’s attention. After all, if Hank, a cranky, disgruntled friend, will help out, how much more will God do? He never sleeps. He’s never irritated. When you knock on His door, He responds quickly and fairly.

He heard so many requests that at times the disciples attempted to turn people away (Matthew 15:22-23). Yet Jesus would not let them.

Great crowds came to Him, bringing the lame, the blind, the crippled, the mute and many others, and laid them at His feet; and He healed them. — Matthew 15:30

A father once brought his demon-possessed son to the disciples of Jesus. They attempted to help the boy but failed. When Jesus learned of their failure, He erupted in frustration.

Such an outburst! Jesus is so über-patient that any sign of impatience is disconcerting. What was the oversight of the disciples? Simple. They never took the boy to Jesus. Not in person and apparently not in prayer. They attempted to heal the boy without calling on Christ. He had to command them: “Bring him here to Me.”

Jesus had a strong word for this: unbelief. “Then the disciples came to Jesus privately and said, ‘Why could we not cast it out?’ So Jesus said to them, ‘Because of your unbelief’” (Matthew 17:19-20).

Unbelief: attempting to help others without calling on Jesus.

Belief: pounding on God’s door at midnight. Doing whatever it takes to present people to Jesus.

À la Moses on Sinai. When God saw the golden calf stunt, he was ready to wipe out the nation of Israel. They were eyewitnesses to ten plagues and one Red Sea opening. Their bellies were full of God-given manna and heaven-sent quail, but did they remember their Deliverer? No, they danced the night away in front of a homemade statue. God was not happy.

Then the Lord said to Moses,

Go down from this mountain, because your people, the people you brought out of the land of Egypt, have ruined themselves. They have quickly turned away from the things I commanded them to do… I have seen these people, and I know that they are very stubborn. So now do not stop Me. I am so angry with them that I am going to destroy them. Then I will make you and your descendants a great nation. — Exodus 32:7–10

Dry grass on Mount Vesuvius stood a better chance of survival. Their only hope was their octogenarian leader, who’d met God, possibly on this same mountain, some years earlier. If Moses had any clout, this was the time to use it. He did.

[Moses] begged the Lord his God and said,

Lord, don’t let Your anger destroy Your people, whom You brought out of Egypt with Your great power and strength. Don’t let the people of Egypt say, ‘The Lord brought the Israelites out of Egypt for an evil purpose. He planned to kill them in the mountains and destroy them from the earth.’ So stop being angry, and don’t destroy Your people. — Exodus 32:11–12

Look at the passion of Moses. On his face one minute, in God’s face the next. He’s on his knees, pointing his finger, lifting his hands. Shedding tears. Shredding his cloak. Wrestling like Jacob at Jabbok for the lives of his people.

And how did God react?

So the Lord changed His mind and did not destroy the people as He had said He might. — Exodus 32:14

This is the promise of prayer! We can change God’s mind! His ultimate will is inflexible, but the implementation of His will is not. He does not change in His character and purpose, but He does alter His strategy because of the appeals of His children. We do not change His intention, but we can influence His actions.

After all, we are ambassadors for Christ (2 Corinthians 5:20). Ambassadors represent the king. They speak with the authority of the throne. They carry with them the imprimatur of the one who sent them. If an ambassador sends a request to the king, will the king listen?

If you, God’s ambassador in this world, come to your King with a request, will He listen? By all means. You actually have a “seat with [Christ] in the heavens” (Ephesians 2:6). You don’t have a seat at the Supreme Court or in the House of Representatives. You have one far more strategic; you have a seat in the government of God. Like a congressman you represent a district. You speak on behalf of your family, neighborhood, or softball team. Your sphere of influence is your region. As you grow in faith, your district expands. God burdens you with a concern for orphans, distant lands, or needy people. You respond to these promptings by prayer.

Intercessory prayer isn’t rocket science. It acknowledges our inability and God’s ability. We come with empty hands but high hopes. Why? God “is able to do exceedingly abundantly above all that we ask or think” (Ephesians 3:20). He “will supply all [our] needs according to His riches” (Philippians 4:19). When God gives, He gives a gift that is “pressed down, shaken together to make room for more, running over, and poured into your lap” (Luke 6:38).

Nothing pleases Jesus as much as being audaciously trusted. When we bring people to Jesus, He opens the pantry.

The quickest way to douse the fire of anger is with a bucket of prayer. Rather than rant, rave, or seek revenge, pray. Jesus did this. While hanging on the cross, He interceded for His enemies:

And bring a grocery basket. God will give you plenty of blessings to take back to them.

Excerpted with permission from Before Amen by Max Lucado, copyright Thomas Nelson.

Who are you praying for? Are you pounding on God’s door at midnight? Who are you leaving in His hands? Come share with us on our blog. We want to hear from you! ~ Devotionals Daily