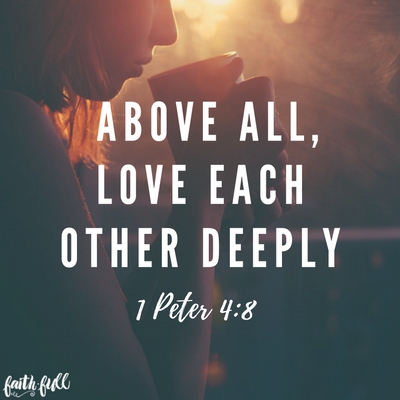 Happiness is having a large, loving, caring, close-knit family… in another city. — George Burns

Above all, love each other deeply, because love covers over a multitude of sins. — 1 Peter 4:8

Loving our families can be tricky. These are the folks we hold most dear, but they can also be the people with whom we experience the greatest conflict. Family relationships have the potential to be strong and loving as well as strained and tense. And sometimes this happens all on the same day!

What can we learn about loving our own people? Time to take a trip back to the Bible to discover some answers.

All in the Family

The Scriptures are not full of perfect people. They are certainly not full of perfect families. Quite the opposite, in fact. In the very first family, Adam and Eve’s son Cain was so jealous of his brother, Abel, that he murdered him. Later on, Old Testament patriarch Jacob swindled Esau out of his birthright with the help of his mother Rebekah. Laban tricked his son-in-law Jacob into marrying Leah, then made Jacob work even longer to marry the woman he really loved, Rachel. Later Jacob became a dad many times over, but he especially favored his two sons by Rachel: Joseph and Benjamin. Joseph’s brothers became insanely jealous when Jacob gave Joseph a colorful coat, so they sold Joseph into slavery. (Sheesh! Jacob appears to win the prize for most episodes of family dysfunction in the Old Testament.)

Old Testament royalty acted no better. When King Saul became jealous of David, Saul’s son and heir, Jonathan, chose his friend David over his father. King David committed adultery with Bathsheba, with the consequence of losing their first child. Later his own son Absalom turned against him.

Face it. Where there’s family, there is potential for conflict. But there is also potential for lasting bonds to help us weather even the stormiest of times.

Look at a key moment during Jesus’ crucifixion, a stormy moment if there ever was one. One of the last things Jesus did was to entrust His mother, Mary, to His disciple John, so that she could be cared for, and John lovingly complied by taking Mary into His home (John 19:26-27).

In order to forge a family that sincerely loves and cares for each other daily, we need to follow Jesus’ example of loving consideration. We also need to take to heart the principles spelled out in Scripture.

So often it seems easier to love those who don’t see us first thing in the morning. We pray for patience with our boss. We ask for wisdom to deal with our child’s teacher. We petition God to help us to be kind to a neighbor. But we take our families for granted.

The admonitions in the Bible about treating others well also apply to those who use the last drop of milk without telling us or who ruin our new white shirt by washing it with their new red sweatshirt. Yes, those who tick us off most are still people whom God calls us to love and serve and honor.

Do our family members witness us treating others with more respect than we show to them? Do we speak kindly to those outside our family while hurling harsh words at our own kin? I know this has often been the case with me. On more than one occasion I have witnessed my children using not the loveliest of tones when speaking with each other. They have been snippy. And snappy. They have interrupted each other and been rude while trying to have a conversation. When I have corrected them, they have gently — or emphatically — pointed out to me that I often use that same approach when talking to their father.

My kids are right. With others I am polite. Always the people pleaser, I want to be liked. I don’t want to lose friends. I don’t want to offend someone and risk the chance that they might not like me. And so outside our home I verbally hold it together. But often with my own family I let down my guard and let harsh words fly. I don’t control my temper and I don’t temper my words. Shame on me. But I suspect I’m not alone.

A Verse for When It’s You Versus Them

I love the Amplified version of the Bible. This particular translation uses an expanded format to explain what particular words meant in the original Hebrew and Greek languages. This amplifies the meaning, thus the name of the version. In the Amplified Bible, Proverbs 15:1 reads:

A soft and gentle and thoughtful answer turns away wrath, but harsh and painful and careless words stir up anger.

Let’s break that verse down, phrase by phrase, to see if we can gain a little help for acquiring loving lips when we address our clans.

The first word we read is soft. Soft is the opposite of loud. It is also the opposite of harsh. It conjures up the fur of a kitten or the comfort of a down-filled blanket.

Are our words soft when we interact with our family members? Or would they better be described as rough and scratchy or hard? When conversing with a spouse or sibling or child — yes, even with your grouchy uncle — let’s make it a point to speak softly. (Unless your spouse is hard of hearing, like the husband of one of my friends. In his case she has to speak loudly  and clearly — and not be grumpy when she has to repeat herself!)

Next we have gentle. This adjective means mild in temperament, considerate, kind, and tender. I would venture to guess that if you polled my family members, this is not always the word they would use to describe my interaction with them. My temperament isn’t always mild. Sometimes it’s a little spicy! I am not always considerate when I speak, often caring more about getting across my opinion than listening to what the other person is saying. But gentle, it is. We are commanded to speak gently rather than severely.

Then we come to thoughtful. Now there’s a lofty goal!

How often do we just rifle off a reaction to someone without putting any thought into what we are saying? But Scripture calls us to be thoughtful when we are speaking to someone, especially when we answer them. This means we stop and think. We pause and pray. We don’t just bark out something mindlessly, but we give careful attention to what it is we are about to say, striving our best to make sure it is appropriate and helpful.

What will be the result of speaking softly and gently and thoughtfully? Scripture says that doing so turns away wrath.

I sure have seen this to be true, especially when I react properly to someone’s question. You know, even those annoying questions — as when a child asks you for the fifth time that hour something that you have already told them you don’t know the answer to yet. Or your mother-in-law calls for the third time that week to ask for your casserole recipe that she keeps writing on an index card — and then misplacing. Such questions don’t always elicit my best answer. But when I make an effort to really think through what I’m going to say and then say it in a tone that is soft and gentle, wrath is often deterred. If I don’t, the interaction can escalate into a full-blown argument. All right, then.

Let’s look at the last half of the verse: “But harsh and painful and careless words stir up anger.” Obviously these three words are the exact antithesis of the three words used in the first half of the verse. Soft is the opposite of harsh. Gentle is certainly at the other end of the spectrum from painful. And if our words are careless, then they certainly are not thoughtful. This triple threat of words will stir the anger in our hearts, spilling it over into our homes. If we want to show love to the people with whom we converse the most, we would do well to memorize, and then implement, the directives in this verse. Oh sure, it won’t be easy. I’ll be the first one to tell you that! But I will also tell you that when I choose to follow this verse’s advice, my family relationships are far less strained.

Sometimes, we just can’t find any tender and kindhearted words because we are so steaming mad. In that case it is often best to just walk away. To pick up the conversation later once our tempers have simmered down a bit. This way we are less likely to have regrets over cruel and cutting comments we might be tempted to make.

Being loving with our words is where it all begins.

We all long for loving family relationships. It may seem like other families may seem more put together, or more affectionate, or that they just have it easier than we do when it comes to relating as a family. Today, though, we can start again. We can practice speaking softly, gently, and thoughtfully with our loved ones and recalibrate the way we interact with each other. Come share with us about learning to speak differently with your family and the impact it had on you. We want to hear your stories! ~ Laurie McClure, Faith.Full