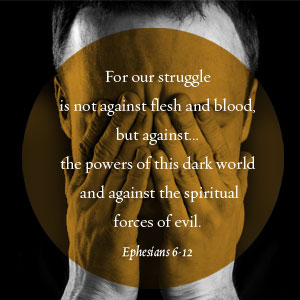 “Finally, be strong in the Lord and in his mighty power. Put on the full armor of God, so that you can take your stand against the devil’s schemes. For our struggle is not against flesh and blood, but against the rulers, against the authorities, against the powers of this dark world and against the spiritual forces of evil in the heavenly realms.”

In his book, What You Need To Know About Spiritual Warfare, Max Anders helps us to understand what Paul is talking about in this incredible Ephesians 6 passage. The book is written as a twelve-week lesson plan, perfect for Bible School, or home study. Anders explains every phrase showing sensitivity to differing beliefs. Then with each section, he offers a Speed Bump.

A Speed Bump offers questions for group or class discussion. With each question, Anders also gives the answer from that chapter.

As this story shows, warfare is not just armies on opposite sides of a line drawn in the sand having at it. Warfare is also diplomacy, espionage, negotiations, and maneuvering behind the scenes—which at times can have a greater impact on the outcome than the fighting on the battlefront. Because, after all, what’s really at stake is power.

Whether they know it or not, all Christians are engaged in a titanic spiritual battle, not against the forces of any earthly nation, but against the forces of darkness. Yet this battle is largely unseen . . . an invisible war. Things go on behind the scenes that we do not naturally perceive or understand. Yet these invisible acts and forces often determine spiritual victories or defeats. We must understand spiritual warfare if we are to emerge spiritually victorious.

This war is between good and bad, between righteousness and evil, between truth and falsehood. God is the source of all good, and with Him are good angels and His people. The initiator of evil is Satan, and he is allied with demons and all those whom Satan can deceive into serving his purposes. God’s purpose is to fill all of creation with His glory. So He works to advance righteousness, goodness, peace, love and joy, and to call people to believe in Him and become citizens of heaven even while they live on earth. Satan’s purpose is to spoil all of creation and to deny and oppose God’s glory how- ever he can, so Satan advances sin, evil, hatred, and despair, and seeks to prevent people from believing in God and be- coming citizens of heaven. God’s strategy is to enlighten and save. Satan’s strategy is to deceive and destroy.

What Are the Three Battlefronts in Spiritual Warfare?

The three battlefronts in our spiritual warfare are the world, the flesh, and the devil.

Spiritual warfare occurs in our everyday lives in different ways, sometimes blatantly, but often very subtly. The rest of the book explores these ways. The Bible shows that this conflict rages on three battlefronts. These fronts are the world (1 John 2:15–17), the flesh (Romans 7:14–25) and the devil (1 Peter 5:8).

The “world” does not mean the material planet. This physical world was created by God, and he pronounced it good (Genesis 1). Yes, it has been corrupted by sin, but it will be redeemed and made new (Romans 8:19–22; Rev- elation 21:1) and be totally good again. That is one wonderful result of the salvation God is performing today. But “world” in its negative sense is the world system of values. It is the present evil order and arrangement of things that began, not with creation, but with the spoiling of God’s good creation by sin (Genesis 3).

The world is the social battlefront, where believers battle sin and evil confronting them from “without.” It is a battleground of external powers, values, influences, and temptations. In this battle, the Bible admonishes us to be in the world but not of the world and to resist the pressure of unredeemed society that would force us into its mold (Romans 12:1, 2). The apostle Paul wrote of our conflict with the world in 2 Corinthians 10:4–5, where he describes worldly convictions, habits, thoughts, and affections held by society, by a culture, by humanity as a whole. These are worldly because they oppose God, deny God, or attempt to exist apart from God.

Overcoming these forces in our own lives, as well as helping others to overcome them, is part of the war we wage against the fallen world in which we live. We are to disengage ourselves from the ungodly elements of the world value system, while at the same time influencing the world for the cause of Christ (Matthew 5:14–16; 28:19–20).

The “flesh” does not mean our skin, meat and bones, nor does it refer only to sexual desire. These are part of God’s good creation. Rather, “flesh” refers to an inherent bent toward sin that every human being inherits from Adam. It refers not just to actions (sex, money, and power), but also to attitudes (lust, greed, and all kinds of selfish- ness). The flesh is the personal battlefront, where believers battle sin and evil “within” themselves, a battleground of internal powers, values, influences, and temptations.

The apostle Paul writes of the flesh in Romans 7 where he says that “I know that in me [that is, in my flesh] nothing good dwells; for to will is present with me, but how to perform what is good I do not find. For the good that I will to do, I do not do; but the evil I will not to do, that I practice. Now if I do what I will not to do, it is no longer I who do it, but sin that dwells in me.”

This passage describes a spiritual civil war raging within the heart of each Christian. Because of the new birth in Christ, the Christian wants to do the right thing, but the flesh is not redeemed and continues to pull us down until Jesus returns or we die (Romans 8:23). So we must war against this tendency, a kind of unhealthy gravity, within ourselves pulling us against the will of God. In this battle, the Bible admonishes us not to let sin rule over our physical bodies. Instead, we are to actively present ourselves to God as instruments to be used for His righteousness (Romans 6:11–14).

The “devil” is not the little man in red tights, with hoofs, horns, and a pitchfork. He is an extremely powerful fallen angel, evil to the core, and absolutely set against God. The devil refers to a supernatural battlefront where believers battle Satan and other evil supernatural beings, whom the Bible identifies as the source of evil. Satan and his allies use the world and the flesh to keep us from doing the will of God.

As we consider this great invisible war in which the devil and his hosts engage us, we must concentrate on two realities. First, we are to be alert to his evil intentions, to his strategy to deceive and destroy us. Second, we must recognize that it is God alone who can make us victorious in this great invisible war. His resources, His strength, His minis- try to us are what allow us to keep from being destroyed in this battle. We must develop the conviction and habit of turning to Him, depending on Him, obeying Him so that He can win the battle for us.

I realize that this is strange talk in our nuts-and-bolts world of computer chips, CDs, and space shuttles. We are not used to thinking about invisible foes and celestial combat. Yet if we are not careful, we will be duped into thinking we are merely battling people and circumstances, when all the time things are being orchestrated by a master- mind behind the scenes. The evil mastermind of darkness is intelligent and powerful. He makes archvillain Darth Vader look like child’s play. If we pretend he is not there, or if we try to do battle with him in our own intelligence and strength, we are doomed to failure.

From the Speed Bump, Anders recommends asking the group to articulate and discuss the three battlefronts in spiritual warfare.

This book is easy to read, comprehensible, and teachable. Showing sensitivity for differing opinions, Anders equips teachers so they can teach more effectively and stimulate positive discussion.