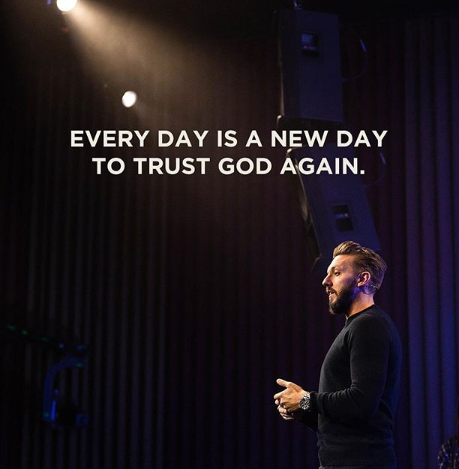 You shall receive power when the Holy Spirit has come upon you; and you shall be witnesses to Me in Jerusalem, and in all Judea and Samaria, and to the end of the earth. — Jesus

I stand by everything I’ve given you in the three cards we’ve laid on the table. But without the fourth card, all I have done is saddled you up on a horse and sent you off to fight a tank all by yourself. That isn’t winning the war — it’s committing suicide. Positive thinking is important; so is watching how you speak and minding your habits. But if that is all you walk away with, then this book is simply self-help. There is something much better than self-help — God’s help. Without it, all the self-management strategies and the tips for growing your emotional intelligence will leave you powerless when it comes to true and lasting change.

As I said, riding out to do battle against a tank on horseback seems like a really bad idea. But in the incredible but true story depicted in the movie 12 Strong, that’s exactly what happened. 12 Strong takes place in the days after 9/11, when al-Qaeda hunkered down in the mountains of Afghanistan. An unbelievably brave contingent of soldiers, led by a character played by Chris Hemsworth, agreed to join forces with a local warlord who promised to get them within striking distance of the terrorists. The only problem was that they didn’t know for sure if they could trust the warlord; there were prices on their heads from the moment they set foot in the country, and allegiances shifted every day. Oh, and they would have to travel via horseback, as there was no way to sneak up on al-Qaeda using traditional vehicles in the mountain passes.

The most jaw-dropping scene takes place when the soldiers charge onto the battlefield up against machine-gun-laden pickup trucks and even full-blown tanks. The Americans had only the guns and grenades they carried with them. They would have been doomed if that were the end of the story, but they also had a laser pointer and a satellite phone. With those two vital pieces of equipment they were able to call for fire to rain from the sky. It wasn’t what they brought into the battle that made them dangerous but rather who was on the other end of the phone — namely the most powerful military in the history of mankind. B-52 bombers circled overhead; all the soldiers had to do was mark the target with the laser and give the command on their phone.

Early in the book I referenced Paul’s fit of despair in which he bemoaned his inability to help himself. Remember how he said it?

I am not practicing what I would like to do, but I am doing the very thing I hate. — Romans 7:15 NASB

If it were possible to do better on our own, we wouldn’t need God. We would simply follow the golden rule, and all would be fine. The problem is that we are fallen and bent towards sinful choices. There are none who seek God; no, not one (Romans 3:10-12). If this weren’t the case, God never would have sent His Son to die for us; instead, He could have just told us to be good. As a matter of fact, that was what the whole Moses on Mt. Sinai thing was about. The Ten Commandments were essentially God telling us to help ourselves. It didn’t even last ten minutes, and then there was a drunken orgy and a golden calf followed by complete and total anarchy.

Paul didn’t finish his outburst by saying, “I guess I’ll just try harder . . .” Instead he said,

Thanks be to God through Jesus Christ our Lord! — Romans 7:25 NASB

Relying on Jesus is our secret weapon, the ace of spades that no card can beat.

The message of the gospel isn’t try; it’s trust. It’s what puts you in contact with power from on high. You want to talk about air superiority? There is nothing so high as the most high. God, who dwells in Heaven and waits to send His ultimate power in response to your asking in faith and receiving it with a mind to act on it. This doesn’t make the other things we have talked about irrelevant; it makes them supremely significant. Being energized by God is like plugging into a power source. There’s a night-and-day difference between using a coffee machine or a curling iron that is plugged in versus using one that is just sitting on the counter.

Excerpted with permission from I Declare War by Levi Lusko, copyright Levi Lusko.

None of us have to power to just “try harder” and be perfect. No matter how hard we try, we sin. Full stop. Thank God that we can rely on Jesus and trust in Him for our forgiveness and sanctification! Right? Come share your thoughts with us on our blog. We want to hear from you!