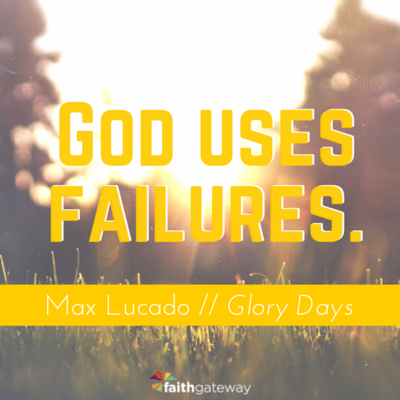 I have a distinct memory from the 1991 Super Bowl. I’m not a football junkie. Nor do I have extraordinary recall. Truth is, I don’t remember anything about the ’91 football season except this one detail. A headline. An observation prompted by Scott Norwood’s kick.

He played for the Buffalo Bills. The city of Buffalo hadn’t won a major sports championship since 1965. But that night in Tampa Bay it appeared the ball would finally bounce the Bills’ way. They went back and forth with the New York Giants. With seconds to go they were a point down. They reached the Giants’ twenty-nine yard line.

There was time for only one more play. They turned to their kicker, Scott Norwood. All-Pro. Leading scorer of the team. As predictable as snow in Buffalo. One season he made thirty-two of thirty-seven attempts. He’d scored from this distance five times during the season. He needed to do it a sixth time.

The world watched as Norwood went through his pre-kick routine. He tuned out the crowd, selected a target line, got a feel for the timing, waited for the snap, and kicked the ball. He kept his head down and followed through. By the time he looked up, the ball was three quarters of the way to the goal. That’s when he realized he’d missed.

All of Buffalo groaned.

The headline would read “Wide and to the right: The kick that will forever haunt Scott Norwood.”

No do-overs. No second chance. No reprieve. He couldn’t rewind the tape and create a different result. He had to live with the consequences.

So did Joshua. He had suffered a humiliating loss. The people of Ai, though fewer in number, had proved greater in might. They had pounced on Joshua’s men, resulting in an unexpected defeat. One of the soldiers, it was learned, had disobeyed God’s earlier command.

The commander was left with the distasteful, unpleasant task of exposing and punishing the rebellion.

Joshua offered a prayer right out of The Wilderness Book of Common Complaint:

Alas, Lord God, why have You brought this people over the Jordan at all — to deliver us into the hand of the Amorites, to destroy us? — Joshua 7:7

Not one of his better days.

The guy had been making field goals his entire life. He showed courage as a spy for Moses. He assumed the mantle of leadership. He didn’t hesitate at the Jordan. He didn’t flinch at Jericho. But in the episode called “Achan’s Deceit and Ai’s Defeat”? He failed. In front of his army, in front of the enemy, in front of God… he failed.

Joshua dragged himself back to his tent. The entire camp was somber. They had buried thirty-six of their soldiers and witnessed the downfall of a countryman.

Joshua sensed the glares and stares of the people.

Joshua’s not a good leader.

He doesn’t have what it takes.

He’s let us down.

He knew what they thought. Worse still, he knew what he thought. His mind sloshed with self-doubt. What was I thinking when I took this job? I should’ve done better. It’s all my fault.

The voices — he heard them all.

When you lost your job, flunked the exam, dropped out of school. When your marriage went south. When your business went broke. When you failed. The voices began to howl. Monkeys in a cage, they were, laughing at you. You heard them. And you joined them! You disqualified yourself, berated yourself, upbraided yourself. You sentenced yourself to a life of hard labor in the Leavenworth of poor self-worth.

Oh, the voices of failure.

Failure finds us all. Failure is so universal we have to wonder why more self-help gurus don’t address it. Bookstores overflow with volumes on how to succeed. But you’ll look a long time before you find a section called “How to Succeed at Failing.”

Maybe no one knows what to say. But God does. His book is written for failures. It is full of folks who were foul-ups and flops. David was a moral failure, yet God used him. Elijah was an emotional train wreck after Mount Carmel, but God blessed him. Jonah was in the belly of a fish when he prayed his most honest prayer, and God heard it.

Perfect people? No. Perfect messes? You bet. Yet God used them. [tweet this]

A surprising and welcome discovery of the Bible is this: God uses failures.

God used Joshua’s failure to show us what to do with ours. God quickly and urgently called Joshua to get on with life.

Do not be afraid, nor be dismayed; take all the people of war with you, and arise, go up to Ai. — Joshua 8:1

Failure is a form of quicksand. Take immediate action or you’ll be sucked under.

One stumble does not define or break a person. Though you failed, God’s love does not. Face your failures with faith in God’s goodness. He saw this collapse coming. When you stood on the eastern side of the Jordan, God could see the upcoming mishap of your Ai.

Still, He tells you what He told Joshua:

There is no condition in that covenant. No fine print. No performance language. God’s Promised Land offer does not depend on your perfection. It depends on His.

In God’s hands no defeat is a crushing defeat. [tweet this]

The steps of good men are directed by the Lord. He delights in each step they take. If they fall, it isn’t fatal, for the Lord holds them with His hand. — Psalm 37:23-24

How essential it is that you understand this. Miss this truth and miss your Glory Days. You must believe that God’s grace is greater than your failures. Pitch your tent on promises like this one:

Those who find grace do so because they “walk according . . . to the Spirit.” They hear God’s voice. They make a deliberate decision to stand up and lean into God’s grace.

There ain’t no future in the past. You can’t change yesterday, but you can do something about tomorrow. Put God’s plan in place.

God told Joshua to revisit the place of failure.

In essence God told Joshua, “Let’s do it again. This time my way.”

Joshua didn’t need to be told twice. He and his men made an early morning march from Gilgal to Ai, a distance of about fifteen miles. He positioned a crack commando unit behind the town. Behind this contingent was a corps of five thousand men (Joshua 8:12).

Joshua then took another company of soldiers. They headed in the direction of the city. The plan was straight out of basic military tactics. Joshua would attack, then retreat, luring the soldiers of Ai away from their village. It worked.

The king of Ai, still strutting from victory number one, set out for victory number two. He marched toward Joshua, leaving the town unprotected. The elite squad charged in and set fire to the city. And Joshua reversed his course, catching the army of Ai in the middle.

Failures are fatal only if we fail to learn from them. [tweet this]

It’s time to rise up.

Don’t waste your failures by failing to learn from them. It’s time to wise up.

God has not forgotten you. Keep your head up. You never know what good awaits you.

Scott Norwood walked off the football field with his head down. For a couple of days thoughts of the missed kick never left him. He couldn’t sleep. He couldn’t find peace. He was still upset when the team returned to Buffalo. In spite of the loss the city hosted an event to honor the team. The turnout was huge — between twenty-five and thirty thousand people. Norwood attended and took his place on the platform with the other players.

He attempted to linger in the background, hidden behind the others. But the fans had something else in mind. In the middle of a civic leader’s speech, this chant began:

Scott remained behind his teammates. After all, he didn’t know why the crowd wanted him.

The chant grew in volume until the speaker had to stop. Norwood’s teammates pushed him to the front of the stage. When the fans saw Scott, they gave him a rousing ovation. He missed the kick, but they made sure he knew he was still a part of their community.

The Bible says that we are surrounded by a great cloud of witnesses (Hebrews 12:1). Thousands upon thousands of saved saints are looking down on us. Abraham. Peter. David. Paul… and Joshua. Your grandma, uncle, neighbor, coach. They’ve seen God’s great grace, and they are all pulling for you.

Press your ear against the curtain of eternity and listen. Do you hear them? They are chanting your name. They are pulling for you to keep going.

You may have missed a goal, but you’re still a part of God’s team.

Are you stuck in a past failure? Have you blown it, made huge mistakes, flopped, or backslidden? Do you feel that that has defined you?  Failures are fatal only if we fail to learn from them. It’s time to rise up. What is God calling you to do? What do you need to try again? Come join the conversation on our blog. We want to hear from you. ~ Devotionals Daily