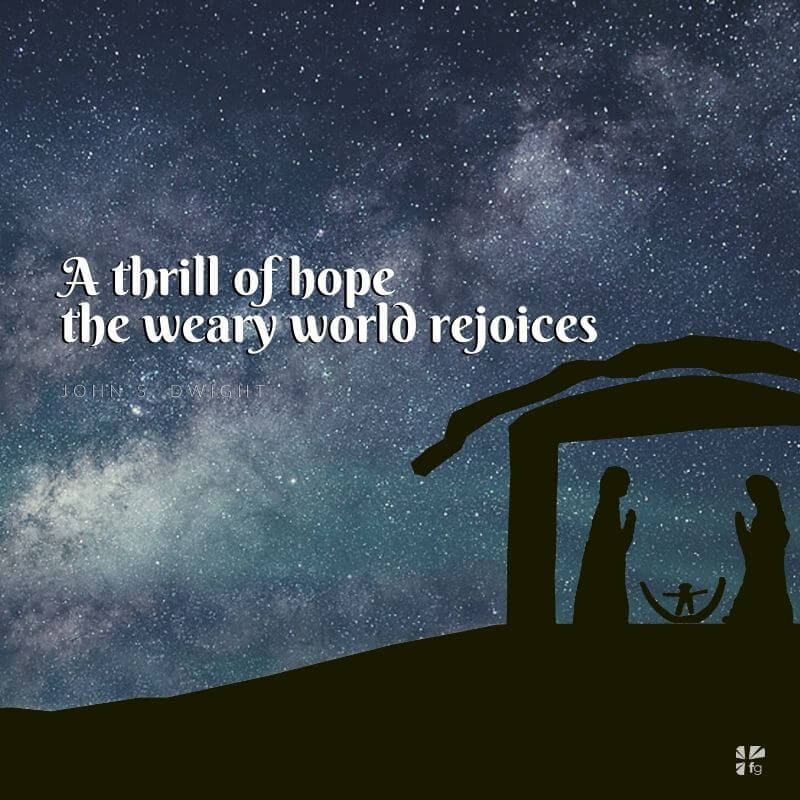 Many different traditions hover over our carol repertoire like the stars on Christmas Eve.

This one is French, rooted in the music of the nineteenth-century Catholic Church, half-opera, half-soirée, designed to echo cavernously round the gloomy spaces of some vast Gothic church, reverently bellowed by a trained opera singer, all vibrato and shirt frills, accompanied by the kind of organ that can make the floor rattle.

The words came first. Placide Cappeau was born in Roquemaure, near Avignon, in 1808. At the age of eight he lost his right hand in an accident when he and a friend, a lad by the name of Brignon, had the bright idea of playing with a gun that Brignon’s dad had rather thoughtlessly left lying about. By way of recompense Brignon père paid Cappeau’s way through school. Despite his disability, young Placide did well, gaining among other accolades a prize for drawing (left-handed, presumably). He then went into the family business, making and trading in wine. Throughout, he wrote poetry, including some lyrics in the local Provençal language and a Byronic epic, which ran to nine thousand verses, about his hometown.

Like some other authored carols of the nineteenth century, this one seems to have been thrown together in something of a rush. The story goes that in 1847 the curé of Roquemaure, abbé Eugène Nicolas, asked his poet friend and parishioner to come up with something for a Christmas pageant he was organizing to raise money for the church window fund. Cappeau agreed, and promptly headed off on a business trip to Paris. On December 3, inspiration caught up with him on the road, and he wrote the poem there and then, in the carriage, halfway between Mâcon and Dijon.

Arrived in Paris, Cappeau and his poem found themselves in the company of the leading opera composer Adolphe Adam through an introduction from the soprano Emily Laurey. Laurey had sung in Adam’s 1840 opéra-comique “La Rose de Péronne.” Cappeau knew Laurey’s husband, Pierre, a civil engineer who was building the new suspension bridge in Roquemaure. Adam set the poem to music in just a few days, and Emily gave the first performance at midnight Mass back in Roquemaure on Christmas Eve 1847.

The song, known initially as the “Noël d’Adam,” was a big hit, though its composer lived to witness only the beginning of its world-wide popularity. Adolphe Adam died in 1856 at the age of fifty-two, universally feted for his many operas, perfectly tuned to the insatiable Parisian appetite for melody, melodrama, and magic.

John Sullivan Dwight was a Unitarian minister (at least to begin with).

Dwight found his escape in music. Following the collapse of the Brook Farm experiment in 1847, he founded Dwight’s Journal of Music, earning a reputation as one of the country’s leading music critics and a passionate advocate of the music of Beethoven.

Several threads of his intellectual hinterland flutter behind the angel-wings of Dwight’s translation: his powerful musicality; the conflicted piety of the lapsed minister who has lost his vocation but assuredly not his faith; a horror of slavery; and the inclusivity of his youthful idealism.

In some ways Dwight continues the process of detoxing the doctrinal content of the poem that Cappeau himself began with his second, later version. This movement from religious orthodoxy to contemporary social comment can be seen within the course of the poem itself too.

It is important to note that Dwight’s version is not a literal translation. Partly this is because, as an able musician, Dwight knew that singability is always far more important than trying to shoehorn the exact shade of meaning of every last circonflexe into the English. Partly, also, it is an attempt to reflect his own worldview in his words. All three versions are given below, verse by verse: Cappeau’s original French; a reasonably literal prose translation; and Dwight’s singing version.

Comparing them may be instructive.

(Christians, it is midnight: the solemn hour when the God-Man came down to us to wipe away original sin and end his father’s anger. The whole world trembles with hope on this night that gives us a savior. People, to your knees! Await your deliverance! Noel, noel! Behold, the Redeemer!) 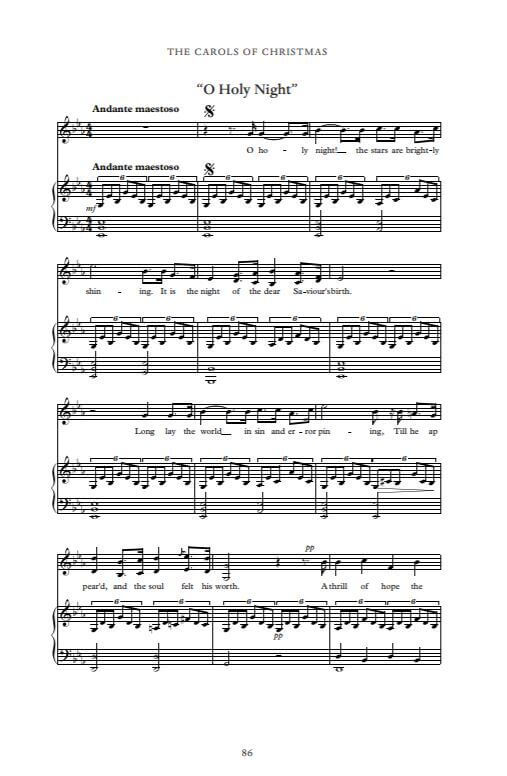 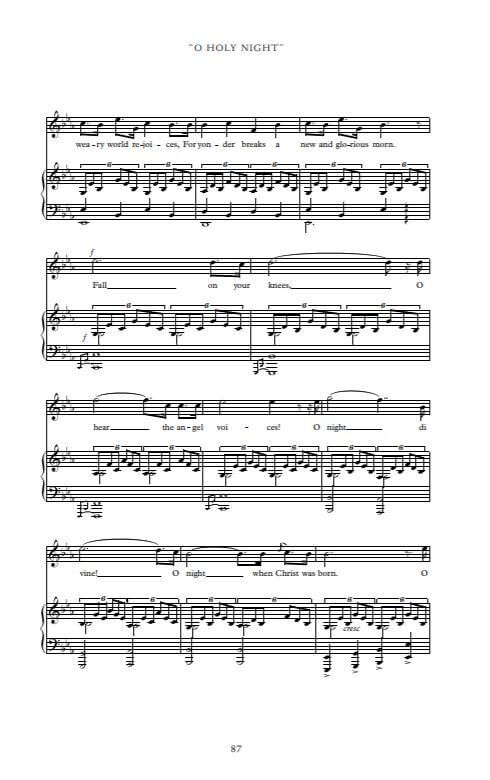 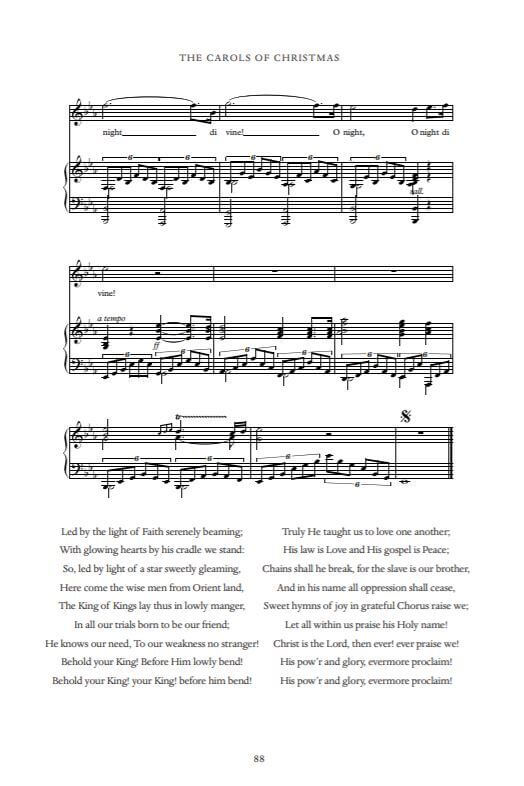 O holy night, the stars are brightly shining,
It is the night of the dear Saviour’s birth;
Long lay the world in sin and error pining, ‘Till He appeared and the soul felt its worth.
A thrill of hope the weary world rejoices,
For yonder breaks a new and glorious morn; Fall on your knees, Oh hear the angel voices! O night divine! O night when Christ was born. O night, O holy night, O night divine.

(Right from the start of the poem, Dwight does away not just with original sin and the “Homme-Dieu” but also with the Father’s wrath and, with it, the need for deliverance by the Redeemer. His “chrétiens” are far less passive observers of their own fallen state than Cappeau’s.)

(The ardent light of our faith guides us all to the infant’s cradle,
as in other times a brilliant star led the kings of the East there. The King of kings is born in a humble stable; you, the mighty of your day, so proud of your grandeur, it is to your pride that God preaches. Bow down before the Redeemer!)

Led by the light of Faith serenely beaming; With glowing hearts by His cradle we stand: So, led by light of a star sweetly gleaming, Here come the wise men from Orient land, The King of Kings lay thus in lowly manger, In all our trials born to be our friend;

He knows our need, To our weakness no stranger! Behold your King! Before Him lowly bend!

(The second verse takes us on the conventional narrative trajectory, broadening out the story to take in the Epiphany, the bringing of the good news to the “chefs de l’Orient,” the wise men, or magi. Cappeau, perhaps unsurprisingly given recent events in France, seems rather more keen than Dwight to put down the mighty from their seat. Perhaps it was this passage, as much as his stately march tune, that led Adam himself to refer to this song as the “Marseillaise réligieuse.” Politics hovered early over this particular nativity.)

(The redeemer has shattered every shackle. Earth is free, heaven open. He sees a brother where once was a slave, and love unites those whom iron once held in chains. Who will tell him that we know him? It is for us all that he was born, suffered, and died.

People, arise! Sing of your deliverance. Noel, noel! Let us sing about the redeemer!)

Truly He taught us to love one another;
His law is Love and His gospel is Peace;
Chains shall He break, for the slave is our brother, And in His name all oppression shall cease,
Sweet hymns of joy in grateful Chorus raise we; Let all within us praise His holy name!
Christ is the Lord, then ever! ever praise we!
His pow’r and glory, evermore proclaim!

On Christmas Eve 1906 the song became the first piece of music to be broadcast live on the radio. Canadian engineer Reginald Fessenden set up the first ever AM broadcast at his base on Brant Rock, Massachusetts. His wife, Helen, takes up the story: “Three days in advance Reg had his operators notify the ships of the U.S. Navy and of the United Fruit Co. that were equipped with the Fessenden apparatus that it was the intention of the Brant Rock Station to broadcast speech, music and singing.”2 Reg introduced the program, then played some Handel on an Ediphone phonograph, then performed “O Holy Night” (which he ascribes, erroneously but understandably, to Gounod) himself, on the violin, and sang along in the last verse, though, as Reg comments with rueful modesty, “the singing of course was not very good.” They ended with a Bible text, a “Merry Christmas” and a promise to broadcast again on New Year’s Eve, which they did. The broadcast was received as far south as Norfolk, Virginia, and even the West Indies.

This song fills a particular niche in our carol repertoire. Among all the folk songs, psalm tunes, nursery rhymes, and hymns, this one is an art song. It is meant for a soloist, preferably one as plump and confident as the Christmas turkey. It doesn’t really work sung by a choir, and certainly not by a congregation.

Above all, it’s a great tune.

Excerpted with permission from The Carols of Christmas by Andrew Gant, copyright Andrew Gant.

“O Holy Night” is one of the most beloved Christmas carols of all time. Do you have fond memories of singing it in church or with family? What is your favorite Christmas carol? Come share with us on our blog. We want to hear from you! ~ Devotionals Daily