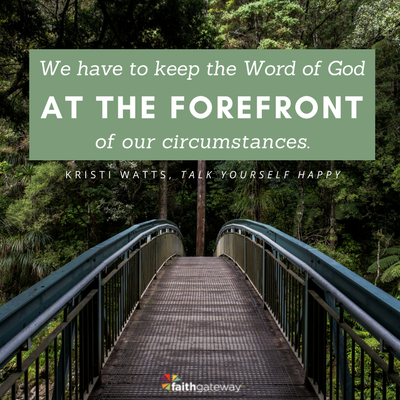 Then, like a dark illusion that had made its conquest in my life, it almost immediately became a cold and aloof stranger, leaving me feeling empty, regretful, and chronically unhappy. It stole my joy, consumed my thoughts, and distracted me from the presence and promises of God, in whom true happiness resides.

We all struggle with something. And it’s that area of weakness that the enemy targets every time. It doesn’t matter how mature we are in Christ, how old we are, or how long we’ve served God; we will all be tempted. And we will all fall short at some point.

Indeed, there is not a righteous man on earth who continually does good and who never sins.

But that doesn’t give us a free pass to do whatever we want. After all, living a life solely to fulfill self is like pouring water into a bucket with a hole in it. It never gets filled.

God has so many wonderful gifts and treasures for us when we obey His Word, but none of that matters unless we know how to obey. And let’s be honest. Even when we know the how, we still need help understanding the why. As in, why do we continue to fall into the same behavior patterns that lead us away from the ways of God? The answer is found in Galatians 5:16-17:

We are in a war. And the battle is between our flesh (self) and the spirit (the Spirit of God within us). The way to win the war is with our words. Why?

Because our words influence what we think and, therefore, how we choose to live.

The challenge is that so many of us have been sowing into the wrong team by fueling a perspective that promotes the advancement of self.

We become motivated by what we see, what we feel, and what we desire rather than what God sees, how He feels about us, and what He wants for our lives. So we open the door for the enemy to lure us with the many counterfeits that target these three self-focused motivations: the lust of the eyes, the lust of the flesh, and the pride of life. We see this played out in the biblical story of Eve encountering the serpent in the garden of Eden.

When the story opens, Eve had everything. In fact, she lacked nothing! She lived in the most beautiful garden with the most spectacular view of God’s creation all around. At her fingertips were the most delightful foods created, and the coolest creatures roamed freely. And even more wonderful was the fact that the Creator himself walked alongside her and her husband, talking regularly with them. God freely gave them everything they needed and desired.

But then the enemy came in the form of a serpent. When he said that if Eve ate of the forbidden fruit she would become wise, his words implied that she wasn’t wise, creating a fear within her that, despite all she had been given, she still lacked something. She took in the enemy’s words, accepted them, and then reiterated them to Adam (Genesis 3).

She chose to trust the lies of the enemy about what she was missing and how great her life could be over the truth of God’s Word. She didn’t trust that God had imparted all the wisdom and knowledge necessary to live an abundant life. She was afraid of missing out.

This was the pride of life. The heart issue was fear rooted in a lack of trust in God.

When Eve saw the fruit the enemy was proffering, she told herself that it was “pleasant to the eye.” She saw it, wanted it, and had to have it. The enemy lured her in by appealing to her eyes and feeding into her desires. Especially that lie that said what she had wasn’t enough. She needed more.

The truth was that God had given her and Adam an entire garden of every kind of fruit imaginable. She already had everything, yet the enemy fed her the lie that God’s everything was not enough. She felt the need for more, more, more.

This was the lust of the eyes, the heart issue at play being the desire to be fulfilled by things outside of God.

Then Eve told herself the forbidden fruit was “good for food.” What’s so bad about that, you ask? It was all about the enticement that appealed to the flesh, the feelings associated with giving in to what makes us feel good, what gives us instant gratification and even a momentary high — things such as over-indulgence of food; sexual relationships outside of marriage; outbursts of uncontrolled anger, gossip; overindulgence in alcohol, drug abuse, and more.

This was the lust of the flesh, and the heart issue here was the desire to feed into the feel-good, placing the flesh as a priority over the spirit.

Ever since those early days in the garden, these temptations have been a struggle for all of us. They seek to throw us off the path God has for us, which only leads to emptiness and unhappiness. But God, as we know, is a God of compassion, and He has provided a way back from this disobedience.

We find victory when we do battle against our flesh by feeding the spirit.

As food sustains and impacts different aspects of our bodies, the Word of God sustains and transforms our spirit-man by impacting our behaviors, mind-sets, and, of course, our talk.

One of the reasons so many of us struggle and feel as if happiness has evaded us is that we’ve stopped leaning into the sustaining power of God’s Word. Instead, we’ve pursued other sources and adopted certain speech, behaviors, and mindsets that are not from God and that negatively affect how we perceive ourselves, as well as how we cope in life.

But this is not what God wants for us. Jesus Christ did not die on the cross simply so we could cope but rather so we could have an abundant life. When we readjust our hearts and begin to tell ourselves how much He loves us versus how much we think He’s withholding from us, we’ll begin to recognize the fulfillment of His promises rather than see only through the filter of our problems.

We have to tell ourselves three things:

God loved His Son, just as He loves each one of us. We can trust that God is faithful and will meet all our needs.

Excerpted with permission from Talk Yourself Happy by Kristi Watts, copyright Kristi Watts.

What’s tempting to you today? Can you trace that desire back to a doubt or judgement about God and His faithfulness? What does God’s Word say to your situation? Dig into Scripture and stop! Wouldn’t you rather have the abundant life Jesus came to bring you? Come share your thoughts with us on our blog. We want to hear from you! ~ Devotionals Daily