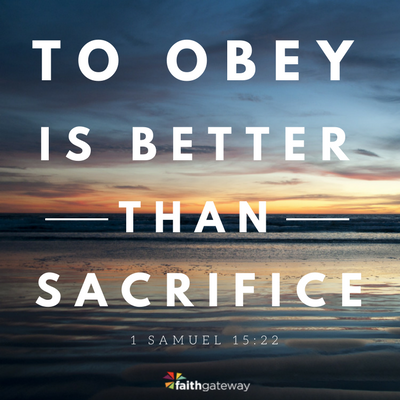 For the foundations of the earth are the Lord’s; on them he has set the world. He will guard the feet of his faithful servants, but the wicked will be silenced in the place of darkness. — 1 Samuel 2:8-9

So much depends on looking cool and fitting in, though, especially in the early teen years. We want everyone to know that we’re as cool as they are, have the same hip taste, can afford the latest styles, and know where to shop. As we’re about to see, it’s not just schoolkids who want to fit in. The children of Israel went through their own middle school phase, since all they could think about was being like everyone else.

This new chapter in the saga of God’s construction of a nation begins with a happy ending. God opens the womb of a woman named Hannah and provides her with the child she so longed to have. She appropriately names him Samuel, which in Hebrew means “heard by God.” Hannah knew that God had listened to the cries of her heart and had given her this new life, this beautiful baby boy. She experienced the joy that comes in our Lower Story when God gives us our hearts’ desires.

Once the child was weaned, she gave the boy to Eli, a priest in the temple, to be trained there. Every year Hannah would make a little robe for her son and take it to him. While she missed seeing Samuel on a daily basis and watching him grow up, she had her hands full with the five other children God bestowed on this once-barren woman.

Just as Samuel’s mom-made robe got a little bigger each year, so did the assignment God had in mind for him. In the Upper Story perspective, God was preparing the young man to lead Israel through its own awkward adolescence.

Samuel comes on the scene during one of those periods of disarray for God’s chosen nation. They have been attacked twice by enemies known as the Philistines, who, during the second battle, stole the ark of the covenant. God allowed the Israelites to be defeated because of their widespread disobedience and corrupt leaders. Samuel has taken over from his mentor Eli, who died when he learned that the sacred ark was in pagan hands.

Just when things settle down and God’s people are behaving themselves, they fall off the wagon. Samuel had appointed his two sons to lead the nation, and they essentially made Capitol Hill politics look like a Sunday school picnic. What a disappointment they must have been to Samuel, for they were anything but godly. According to the Bible, they “accepted bribes and perverted justice” and used their position to line their own pockets.1 Maybe the leaders of all the other nations were corrupt, but God’s nation was called to be different.

Samuel’s spiritual advisers know the two brothers have to be removed, and they call a meeting to convince him to make a change. They have the right diagnosis but the wrong solution: “Your sons do not follow your ways; now appoint a king to lead us.”2

Samuel takes this as a personal affront — a challenge to his own leadership — so he seeks God’s advice. Essentially, God tells him, “They’re not rebelling against you but against Me, and they’ve done it repeatedly since I rescued them from Egypt. Tell them they can have their king, but that it’s going to cost them.” When Samuel goes back to his advisers and tells them that life under a king will limit their freedoms and press their children into the king’s service, they still ask for a king, finally giving the real reason: “Then we will be like all the other nations.”3

It’s a bit comical but mostly sad, isn’t it, the price we’re willing to pay to be like everyone else?

In the Lower Story, all the other nations surrounding Israel have kings, but the Israelites just have priests and prophets leading them. Religious people. Kings wore regal robes and jeweled crowns; priestly garments were quite simple and drab in comparison. Kings could make decisions on the spot; religious leaders checked in with God first and conferred among themselves. Kings commanded massive battalions of horse-drawn chariots that carried warriors dressed in armor and brandishing swords and spears; religious leaders told their men to blow horns and shout or carry candles in clay pots.

Simple. In God’s Upper Story, He wants something better for us. He wants us to be so different that we attract others to Him and His ways. “Everyone else” indeed have their kings, but they also have rampant idolatry and barbaric behavior. They worship pagan gods and seek no guidance from the one true God on how to live with and treat each other. If the Israelites were to become like “everyone else,” how could God build his nation? How would they be able to attract others to him?

Despite Samuel’s warnings, the people still want a king, and as we learned earlier, sometimes God gives you what you want, even if it’s not what He wants for you. He always prefers that in our Lower Story we do things His way, not because He has to have His way but because He loves us. He knows that His way will always make our lives better, and this is all He has ever wanted for His special nation.

But we don’t always do things His way, which only makes our lives miserable. This doesn’t fluster God because it won’t change the outcome of his Upper Story one bit.

He is going to build His nation, whether we obey Him or not.

Ultimately, He will find a way to do the one thing He has always wanted to do — live with us in perfect community forever.

So it falls to Samuel to find a king. God directs him to a man named Saul, a man who clearly has kingly potential. He is “as handsome a young man as could be found anywhere in Israel, and he was a head taller than anyone else.”4 God may not have wanted the Israelites to have a king, but when He finally relents, He gives them exactly the kind of king they want. A king who looks like a king on the outside. In our day, we would say that Saul looked “presidential.”

Samuel meets with Saul over a big meal and explains that God has chosen him to lead the nation of Israel. He then sends him off on a spiritual retreat to prepare him for his daunting assignment. When Saul returns, Samuel calls the nation together and introduces him as their new king. After a brief celebration, he is put to the test. A neighboring nation threatens to gouge the right eye out of everyone in Israel as a way to disgrace them. (War is never pretty, but in ancient times, it was downright ugly.) Saul responds swiftly and dramatically. His first battle as king of Israel is a resounding victory, and the nation, with both eyes intact, is back on its way to establishing God’s reputation throughout the land.

Just to make sure they won’t mess things up again, Samuel calls the nation together and gives what amounts to his farewell speech as their leader — his final instructions to a nation that had finally gotten what everyone else had. It is a brilliant speech that takes them all the way back in their history to their escape from Egypt and reminds them of the many times they forgot God and suffered for it. Then he chides them for going against God’s wishes by asking for a king. He must have been quite convicting, because they begin to repent for committing such a grievous sin against God. But Samuel reassures them that if they obey God and faithfully serve him with all their hearts, everything will be just fine because God still loves them and will not reject them. After all, he gave them their king, didn’t he?

After Samuel’s powerful speech reminding the Israelites that God has given them a second chance and all they have to do to receive His blessings is to honor and obey Him, Saul takes the reins as king and promptly forgets everything Samuel said. Throughout his reign, the Israelites wage a bitter war against the Philistines. Then, at God’s instruction, his attention turns to another enemy, the Amalekites.

While it is true that God is merciful, He is also just. He will always welcome us back, but He will not protect us from the consequences of our rejection of His ways.

The other Upper Story message is that God’s people are called to be different, to stand out in contrast to others by reflecting his very character. Saul not only disobeyed God, but his actions misrepresented God. As the new king of God’s chosen nation, he caused people to get the wrong idea of what God was really like. By plundering the prized possessions of the Amalekites, he became like all the other kings — nothing special about this nation.

Like it or not, those of us who trust Jesus Christ are His visible witness. Just as Saul and the Israelites were God’s representatives, so we, the New Testament people, are the representatives of God today. As we will learn later in this story, the New Testament church is called the “body of Christ.” Most of the people in our world will get their take on God from us. We may be the only Bible they ever “read.” Our interactions with them may be all they glimpse of God’s grand design in his Upper Story.

Whether you are in middle school or coveting a new sports car just like the one your neighbor drives, it is a lot easier trying to be like everyone else. But God wants us to be different. Not weird or eccentric, but different. His Upper Story tells of His relentless pursuit of people to join His perfect community, where they will spend eternity with Him. By living splendidly unlike “everyone else,” we give others a glimpse into what life in this community will be like. God doesn’t want us to be just like everyone else; He wants us to be known by our love. He wants us to look like Jesus.

As Jesus-followers, we don’t have the option of being like the world around us if we want to represent our Savior. To obey is better than sacrifice. (1 Samuel 15:22) God wants us to look like Jesus! Come share your thoughts on not conforming to the world today in our blog. We want to hear from you! ~ Devotionals Daily