I could tell another story instead. I could recount a gruesome, premeditated murder. I could describe unspeakable acts. I could take you behind the scenes into the shielded private world of my Amish neighbors as they mourned the horrific losses of their daughters, granddaughters, nieces, sisters, and friends. I could speculate about secrets deeply buried in a troubled heart. I could attempt to decipher the clues of brokenness and irrational, twisted thinking as the man I loved, the man I thought I knew, descended into a silent madness.

I was not at the crime scene. I was not privy to murderous plans. I cannot violate the privacy of my beloved Amish neighbors who showed me nothing but tenderness and grace when their own hearts had been shattered. I did not know there were dark secrets inside my husband, Charlie, nor did I know there were clues to watch for. And I simply cannot fathom the darkness that invaded Charlie’s head or heart.

The only story I have to tell is my own. Although an unspeakable tragedy invaded my life and thrust me into a sudden storm of darkness, my story always has been and continues to be one of miraculous love.

It has taken me years to find my voice to write this story. Not because I couldn’t find the words — I never lacked for words. But because, until recently, I was unable to see the reason to write my story. In fact, I could not comprehend why my story would matter to anyone but my family, closest friends, and a few local church groups still feeling their own way through the aftermath of the tragedy.

If the “outside” world wanted to know about the Amish schoolhouse shooting, the Internet had far more information than I would ever know. And apart from the shooting, I knew there was nothing about me that was remarkable in the least. In fact, I’d led a thoroughly unremarkable life, and since the shooting I had done my very best to avoid the media at every turn. When headlines about “the shooter’s wife” still surfaced two, three, four years after the shooting, I’d cringe at the label that had stolen my name and shake my head in disbelief that anyone could still be interested in the woman in the background.

It wasn’t until the fifth anniversary of the October 2, 2006, Nickel Mines Amish schoolhouse shooting that I realized the importance of telling my story to the world, when once again the anniversary brought the spotlight back on my family. Rather than diminishing, the level of interest in my story, along with invitations to speak, was increasing. The questions I was asked were shifting from the details of the event itself to questions about how I’d emerged from such a tragedy with joy and wholeness. How, after Charlie’s heinous acts, had I been able to trust my heart to a man again, enough to actually remarry? Where had I found the strength to blend my family with another? How had my faith survived such a horrific ordeal? How had the tragedy changed me?

For the first time, I understood that the hunger of those interested in hearing my story was not really about me at all — it was about the experience of loss or pain or struggle or mystery in the lives of my listeners. Their lives were also filled with sudden storms and dark places. What they were searching for within my story was the secret to navigating through their own darkness.

They were hungry for a story of hope. What they knew of my experience had been so abhorrent, so incomprehensibly shocking and shattering, that they longed to discover how I’d managed to go on breathing, much less walking and living and even loving again.

And that was a story I could tell, not because I was at all remarkable, but because the secret to go on living — and more than that, to go running toward life, laughing and singing and loving, vibrantly alive even when every circumstance threatens to drown you in darkness — was remarkable news I had to share. I’d been given a precious gift in my darkest moment. I could not keep it to myself.

Once I knew the reason to tell my story, I found my voice to share it.

I won’t keep you in suspense. I’ll tell you right now, before you even have to turn the page. The secret is this:

No matter how tragic your circumstances, your life is not a tragedy. It is a love story. And in your love story, when you think all the lights have gone out, one light still shines.

Step into my story and I’ll show you how to see that light.

Download the sampler – One Light Still Shines by Marie Monville

In the startling tragedy of the Amish schoolhouse shooting at Nickel Mines, one story has never been told; Marie Roberts Monville, the wife of the man who created such horror, tells her story for the very first time. It is a story of sorrow and destruction, but also one of majestic deliverance, unending compassion, breathtaking forgiveness, and grace-filled redemption. Within a solitary moment, Marie Monville realized that life, as she knew it, was over. What she never anticipated was a tangible encounter with God reaching into her circumstances, through them rewriting all she believed about herself, her faith, and the God she thought she knew. In this free sampler, you’ll find the first two chapters of her newly released book, One Light Still Shines. Come face to face with the Power behind every answer—a love that begs to be received. 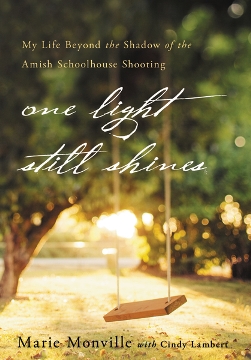