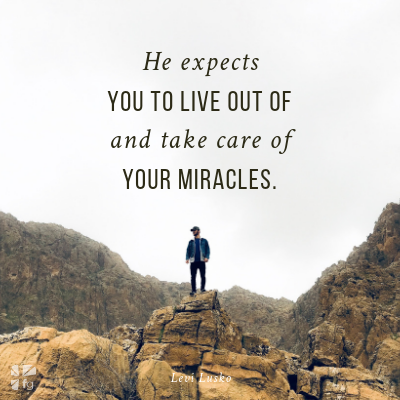 It is true that salvation is all about grace. We are dead in sin, and dead people can’t rise—no matter what they do. On the other hand, once Jesus has raised us from the dead, he expects us to apply ourselves effectively, working out what he has worked in us. You should pray like it is all up to God and work like it is up to you. Or to put it in financial vernacular: think like a millionaire but hustle like you’re broke.

You see a picture of this when Jesus raised a little girl from the dead (Mark 5:35–43). Her resurrection was all Jesus. She added nothing to it. That is us without God—hopeless, lost, and completely unable to change our state. But once she came back to life, Jesus told her family to give her something to eat (v. 43). Why did he raise her from the dead but insist that they be the ones to feed her? God will never do for us what we can do for ourselves.

We see the same thing when Jesus raised Lazarus from the dead. Jesus was the one who caused Lazarus’s coagulated blood to flow through his dried-up veins, but then he told those there to unwrap him from the grave clothes. It is God alone who can give the miraculous, but he expects you to live out of and take care of your miracles.

We are not to wage war according to our own resources. The power that leads to victory is not in us or from us; it is with God and comes to us from his hand. But that same power has to be wielded. Having it and using it are two completely different things. My brother bought me a Movie Pass card that allows me to see a movie in the theater every twenty-four hours. It sits there in my wallet whether I see any movies or not. The same is true of gym memberships; just because you have the right to go to the gym and freely utilize the equipment doesn’t automatically mean you get a six-pack. You have to walk in and take advantage of what your membership gives you access to.

How pitiful it would have been for the Americans to try to duke it out on their own instead of calling on the B-52 bombers that were waiting for them! That’s what we do when we try to fight spiritual battles using only human strategies.

Keep that picture in mind as you read these words from 2 Corinthians 10: “For though we walk in the flesh, we do not war according to the flesh. For the weapons of our warfare are not carnal but mighty in God for pulling down strongholds, casting down arguments and every high thing that exalts itself against the knowledge of God, bringing every thought into captivity to the obedience of Christ” (vv. 3–5).

One of the biggest mistakes you can make is to try to do God’s work without God’s power. There’s a great scene in Iron Man 3 where Tony Stark’s autopilot malfunctions, and he flies hundreds of miles out of the way, crash landing in snow-covered Rose Hill, Tennessee. Feeling claustrophobic, he ejects. But then once he realizes how “brisk” it is in the snow, he wishes he had stayed in the coziness of the suit.

He trudges through the snow, carrying the Iron Man suit behind him like a kid pulling a sled. He is totally huffing and puffing as he slowly pulls it one foot at a time. It’s a perfect visual because the suit wasn’t designed to be carried by him; it was designed to carry him as he executed his calling as a superhero.

The Bible says that we are in Christ. “In Christ” is a theological term to describe the way God sees us as being completely covered in Jesus. But when it comes to fighting battles, you can also think of being in Christ the way Tony is in the Iron Man suit. Through our continued reliance on Jesus, we tap into an arsenal of protection, ammunition, and navigation.

So many Christians are struggling to pull what should propel them, trying to fight the battles of this life with their own strength, waging war according to the flesh. Don’t make that error! Stay in the suit. Jesus is not something to carry like a religious trinket or good-luck charm, He is a risen Lord who will carry you.

Do you struggle with this balance between accepting grace and doing the work you need to? Does this description of being “in Christ” help better understand the role you have to play? We’d love to hear your thoughts in the comments!