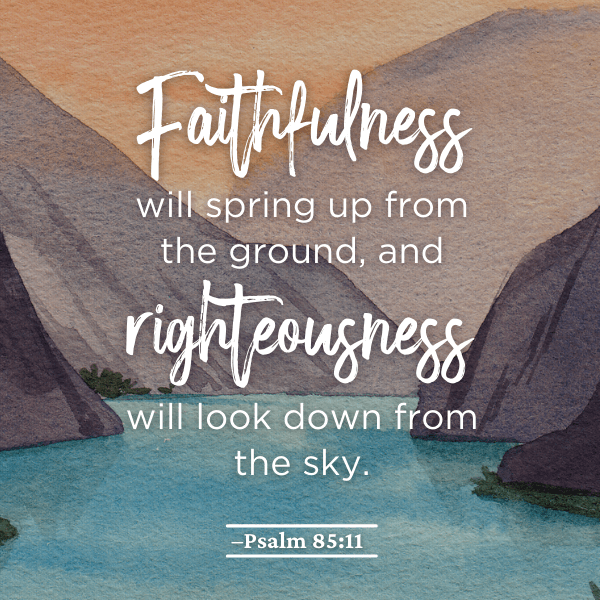 Give justice to the weak and the orphan; maintain the right of the lowly and the destitute. — Psalm 82:3

“Cursed be anyone who deprives the alien, the orphan, and the widow of justice.” All the people shall say, “Amen!” — Deuteronomy 27:19

Injustices in the World

On October 2, 2006, a dairy-truck driver entered a one-room schoolhouse in the Old Order Amish community of Nickel Mines in Pennsylvania. The driver, Charles C. Roberts IV, first demanded that all the boys leave the room; he then ordered the eleven girls to line up facing the chalkboard.

The girls had a clear sense of the danger they faced, seeing all the instruments of violence before them: the stun gun, the nails, the bolts, the wrenches, the rope, the plastic ties to bind their feet, and the chains and clamps for restraint. Shortly before Roberts opened fire, two sisters requested they be shot first so that the others might be spared. He ignored their request. Instead he killed five girls and wounded seven before killing himself. One of the sisters was wounded; the other was killed.

The names of the girls who were killed were Naomi Rose Ebersole, seven; Marian Fisher, thirteen (one of the sisters who did not survive); sisters Mary Liz Miller, eight, and Lina Miller, seven; and Anna Mae Stoltzfus, twelve.

Janice Ballenger, the deputy coroner in Lancaster County, Pennsylvania, shaken up by the event, said afterward, “There was not one desk, not one chair, in the whole schoolroom that was not splattered with either blood or glass.”1

On June 7, 1998, three known white supremacists murdered a forty-nine-year-old father of three in Jasper, Texas. The father, a black man, had accepted an early morning ride home with the three men. After attacking him, they dragged him to his death behind their truck, later dumping the man’s mutilated remains in the town’s segregated African American cemetery. Afterward they went to a barbecue. The name of the man who was killed was James Byrd Jr.2

To date, more than 250,000 people have been displaced from northeast Nigeria on account of the violence caused by the Islamist extremist group Boko Haram.3

In early January 2019, two men and nine teenage boys were rescued from bonded-labor slavery at an urban factory near Chennai, India.4

On January 31, 2019, the Roman Catholic Church in Texas released the names of almost three hundred priests who it said had been credibly accused of child sex abuse over nearly eight decades.5

During the late 2018 trial of Joaquín Guzmán Loera, the Mexican drug kingpin known as El Chapo, nearly every level of Mexican government was implicated in bribes, including the presidency.6

In 2017, the CDC found the first genetic link from Legionnaires’ disease to the lead-contaminated water supply in Flint, Michigan; such lead exposure in children included the possibility of impaired cognition, behavioral disorders, hearing problems, and delayed puberty.7

By the time Hurricane Harvey left the Gulf of Mexico in August 2017, an estimated thirty thousand people had been displaced from their homes. Nearly a trillion gallons of water had fallen over the city of Houston, and the poor were hit the hardest.8

No True Faith Without Justice

The fact that injustices occur every day is obvious to anyone who reads the daily news. Injustices happen to individuals, people groups, and entire countries; they mar systems and institutions. Injustices take place in our own homes and in nature as a whole. The book of Psalms understands this. The psalmist says this about the wicked in Psalm 10:

In arrogance the wicked persecute the poor…
those greedy for gain curse and renounce the Lord.

The psalmists see powerless people who are oppressed by the powerful, and so they pray for justice (Psalm 37; Psalm 82; Psalm 113); Christians see only Psalm 51 with its plea for mercy.10 Writes C. S. Lewis, “Christians cry to God for mercy instead of justice; they [the psalmists] cried to God for justice instead of injustice”11 (emphasis original).

It isn’t that mercy and justice are opposed in the Psalter; they belong together intimately, integrally. But while many Christians give justice half the attention they give to mercy, the Psalter devotes twice as much space to justice as it does to mercy. This is not because mercy matters less than justice but because a world that violates justice violates God’s fundamental purposes for that world.12

In the psalms there is no true worship without justice, no faithful prayer that leaves out justice, and no genuine faith that takes justice less seriously than God takes it. There is no account of God that makes justice secondary to his nature or an afterthought to his redemptive, restorative work in the world. There is likewise no account of human beings in the psalms that allows justice to remain a concern only of other people, rather than of all humanity.

The Psalms of Justice

Righteousness and justice are the foundation of Your throne; steadfast love and faithfulness go before You.

The works of His hands are faithful and just; all His precepts are trustworthy. They are established forever and ever, to be performed with faithfulness and uprightness.

But for the psalmist, it is not simply that God cares about the abstract idea of distributive and retributive justice; it is that God loves justice. Psalm 37:28 declares,

For the Lord loves justice; He will not forsake His faithful ones.

Mighty King, lover of justice, You have established equity; You have executed justice and righteousness in Jacob.

In the psalms the Lord is king. As king, the Lord stands sovereign over all of Creation, sovereign throughout all eternity, sovereign over the nations and over the people of Israel. There is nowhere that God’s justice should remain absent (Psalm 33:5-9; Psalm 96:11-13). It should be manifest at every level of reality — locally, globally, and cosmically (Psalm 97:6). Psalm 85:10-11 articulates this comprehensive vision of justice:

Steadfast love and faithfulness will meet;
righteousness and peace [shalom] will kiss each other.

Faithfulness will spring up from the ground,
and righteousness will look down from the sky.

God wants justice for human beings precisely because He loves human beings. Writes Nicholas Wolterstorff, “God desires that each and every human being shall flourish, that each and every shall experience what the Old Testament writers call shalom”14 (emphasis original). Shalom, or a deep sense of well-being, is God’s original gift to the cosmos and its final goal. It is what God has promised to creation and what Je will fulfill in the new creation.

As the book of Psalms sees it, God isn’t the only One who’s in the business of making justice happen; human beings are entrusted with this work too.