If you knew you only had a few days left to see the world with your eyes, what would you do?

After his visit to the USC football games and practices, Jake turned to his other true love: golf. Jake loves to golf, and he’s an exceptional player. So he started planning a golf trip up to Monterey Peninsula in Northern California. He wanted to play the famed Pebble Beach course before losing his sight.

Jake has been playing golf since the age of four and was developing his game nicely despite the loss of vision in one eye. Even with the harsh reality of losing his second eye, Jake remained unwilling to give up this dream. Golf would remain part of his life, whether he had sight or not. He still aims to become a professional golfer.

So Pebble Beach it was, and it turned out to be the last course Jake was able to play before losing his sight. Pebble Beach is carved into a truly distinct shoreline that captures the wonder of every golfer who is privileged with walking along its fairways. Once you’ve played Pebble Beach, it stays with you forever. Jake’s foursome that day included his dad, one of his best friends, Evan, and Evan’s dad.

“It wasn’t this sad, dramatic round of golf,” Brian said afterward.“It was a fun couple of days that included great golf, the kids jumping on the beds at the lodge, hitting balls into the ocean in the darkness of the night, and just goofing off. That round of golf, accentuated by the beauty of our surroundings, was just what Jake needed. He will remember the sights and experience forever.”

If you ask Jake what he remembers about that day at Pebble Beach, he’ll tell you that after the day of golf was done and they returned to their hotel room, he and Evan took all the pillows from the hotel room and threw them in the middle of the floor. Then they took turns climbing onto the couch and jumping off in dramatic fashion, slamming on top of the other in a reenactment of a professional wrestling “smackdown” session. They played, as twelve-year-old boys do, until they were worn to a frazzle.

With the days before the surgery quickly disappearing, Jake’s anxiety began to grow.

He would think, Only five days left, and the worry would return. The closer it came to the scheduled surgery date, the more distraught and afraid he became. He would later say that his anxiety was so high that he became more afraid of the day he’d lose his sight than of actually living sightless.

With only a few days left, Jake’s final wish was to decorate the house for Christmas early so he could see the decorations one last time. Even though it was early November, the family woke up that Saturday morning and crawled up into the attic to begin dropping down the twenty-five boxes of Christmas decorations. The Olsons love to decorate for Christmas! Jake’s favorite decorations include the Charles Dickens Christmas Village, so they spent half the morning going through the usual ritual of setting it up. Jake’s mom got the rest of the house gleaming with Christmas decorations and joy. Christmas songs played in the background. Cindy commented, “It was comforting that although the day to set up came earlier and perhaps under different circumstances, the entire day felt like a normal ‘Let’s get the house ready for Christmas’ type day for us.

That was such a comfort to me. It took our minds completely off the surgery. It just reminds us of how resilient and strong God created us when we allow his love to enter our hearts.”

The Last Morning with Sight

The night before surgery, Jake attended USC football practice. Brian said, “Being at the practice and being with the guys, there wasn’t this intensity of what we were confronting the next day. It turned out to be this sweet moment. I’ll never forget it, and Jake won’t either.” Coach Carroll and the team encouraged Jake and invited him to come back as soon after the surgery as he could.

The day of the surgery arrived, and Jake’s mom woke him in the early morning hours with a delicate kiss on his cheek. It was the type of kiss only a mom can give. The day had just started, but she couldn’t stop crying. This started Jake crying, but he comforted his mother by saying, “Mom, don’t worry. This is just going to be a new phase of my life.”

As Jake rode in the car on the way to the hospital, he suddenly realized this was the last time he would see the outside world.

He put his face against the window and desperately tried to take in all the sights his eyes and brain could record. He looked on one side of the car and then the other, trying to permanently place in his mind the images of the world around him. Out from under his glasses, tears were streaming down Jake’s cheeks. It was more than his mom and dad could bear to watch.

As they checked into the hospital, and for most of the morning, they tried in vain to hold back the tears. A momentary blessing came when USC center and Jake’s favorite player Kris O’Dowd arrived at the hospital. Jake’s spirits picked up a bit, and Kris and Jake played a card game. But when the nurse came into give Jake his IV, Jake started crying, Brian and Cindy started crying, and Kris, this mountain of a man, started crying. Kris went over to Jake, gave him a kiss on the head, and said, “You’re the strongest kid I’ve ever known. Keep being who you are and everything will work out.” Jake said the hardest part of the entire experience was right then, knowing those were his last minutes of sight.

Have you ever gone through a tragic or life-altering experience? In what ways has God brought you through those difficult times? Share your stories and comments below. We would love to hear from you! 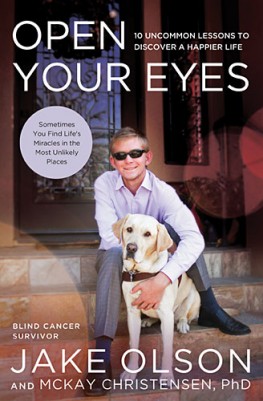