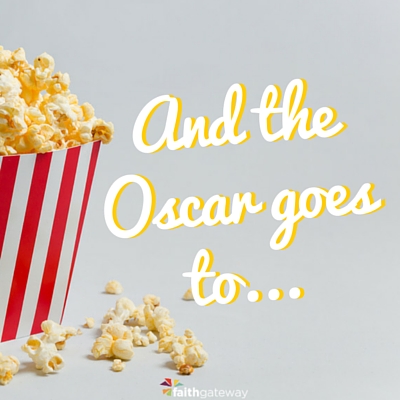 This Sunday will be the 88th Academy Awards ceremony. The nominees for Best Picture range from science fiction and period pieces to tales of modern day heartbreak, perseverance, and overcoming. However, no matter what movie takes home the Oscar this year, every year common themes always appear in these critically acclaimed films that stir the heart and encourage the mind.

Are one of this year’s movies your favorite? Check out a few books that share central themes with the Oscar nominees that will inspire you to live an Academy Award-winning life.

The Girl From the Train by Irma Joubert

As World War II draws to a close, Jakób fights with the Polish resistance against the crushing forces of Germany and Russia. They intend to destroy a German troop transport, but six-year-old Gretl’s unscheduled train reaches the bomb first. Gretl is the only survivor. Though spared from the concentration camp, the orphaned German Jew finds herself lost in a country hostile to her people. When Jakób discovers her, guilt and fatherly compassion prompt him to take her in. For three years, the young man and little girl form a bond over the secrets they must hide from his Catholic family.

But she can’t stay with him forever. Jakób sends Gretl to South Africa, where German war orphans are promised bright futures with adoptive Protestant families — so long as Gretl’s Jewish roots, Catholic education, and connections to communist Poland are never discovered.

Separated by continents, politics, religion, language, and years, Jakób and Gretl will likely never see each other again. But the events they have both survived and their belief that the human spirit can triumph over the ravages of war have formed a bond of love that no circumstances can overcome.

The End Series by New York Times bestselling author Tim LaHaye and Craig Parshall is an epic thrill ride ripped from today’s headlines and filtered through Scriptural prophecy. Joshua Jordan’s new weapons defense system will secure America against an array of new enemies, including a nuclear strike on New York City by North Korea. But global forces are mounting, and corrupt government leaders will go to any extreme to prevent an impending economic catastrophe.

Where the Wind Leads: A Refugee Family’s Miraculous Story of Loss, Rescue, and Redemption by Vinh Chung with Tim Downs

Vinh Chung was born in South Vietnam, just eight months after it fell to the communists in 1975. His family was wealthy, controlling a rice-milling empire worth millions; but within months of the communist takeover, the Chungs lost everything and were reduced to abject poverty. Knowing that their children would have no future under the new government, the Chungs decided to flee the country. In 1979, they joined the legendary “boat people” and sailed into the South China Sea, despite knowing that an estimated two hundred thousand of their countrymen had already perished at the hands of brutal pirates and violent seas.

Where the Wind Leads follows Vinh Chung and his family on their desperate journey from pre-war Vietnam, through pirate attacks on a lawless sea, to a miraculous rescue and a new home in the unlikely town of Fort Smith, Arkansas. There Vinh struggled against poverty, discrimination, and a bewildering language barrier—yet still managed to graduate from Harvard Medical School.

It’s the 22nd Century. A tough, pioneering people mine the moon for Helium-3 to produce energy for a desperate, war-torn Earth. Sixteen-year-old Crater Trueblood loves his job as a Helium-3 miner. But when he saves a fellow miner, his life changes forever. Impressed by his heroism, the owner of the mine orders Crater to undertake a dangerous mission. Crater doubts himself, but has no choice. He must go.

With the help of Maria, the mine owner’s frustrating but gorgeous granddaughter, and his gillie — a sentient and sometimes insubordinate clump of slime mold cells — Crater must fight both human and subhuman enemies. He’ll battle his way across a thousand miles of deadly lunar terrain and face genetically altered super warriors in his quest to recover an astonishing object that will alter the lives of everyone on the moon.

The Newsmakers by Lis Wiehl

TV reporter Erica Sparks has become a superstar overnight. Is it due to her hard work and talent, or is she at the center of a spiraling conspiracy? Erica Sparks is a beautiful and ambitious reporter who has just landed her dream job at Global News Network in New York. And while it was hard to leave Jenny, her cherished eight-year-old daughter, in the custody of her ex-husband, Erica is determined to succeed in the cutthroat world of big-time broadcasting. She can only hope her troubled past won’t come back to sabotage her dreams.

On her very first assignment, Erica inadvertently witnesses—and films—a horrific tragedy, scooping all the other networks. Mere weeks later, another tragedy strikes—again, right in front of Erica and her cameras. Her career skyrockets overnight, but Erica is troubled. Deeply. This can’t just be coincidence. But what is it? Erica will stop at nothing to uncover the truth. But she has to make sure disaster—and her troubled past—don’t catch up with her first.

My Name is Mahtob: The Story that Began in the Global Phenomenon Not Without My Daughter by Mahtob Mahmoody

Two decades ago, millions of readers worldwide thrilled to the story told in the international bestseller Not Without My Daughter — subsequently made into a film starring Sally Field — that told of an American mother and her six-year-old child’s daring escape from an abusive and tyrannical Iranian husband and father. Now the daughter returns to tell the whole story, not only of that imprisonment and escape but of life after fleeing Tehran: living in fear of re-abduction, enduring recurring nightmares and panic attacks, attending school under a false name, battling life-threatening illness — all under the menacing shadow of her father.

Lucy Alling makes a living selling rare books, often taking suspicious liberties to reach her goals. When her unorthodox methods are discovered, Lucy’s secret ruins her relationship with her boss and her boyfriend, James — leaving Lucy in a heap of hurt and trouble. Something has to change; she has to change.

In a sudden turn of events, James’s wealthy grandmother, Helen, hires Lucy as a consultant for a London literary and antiques excursion. Lucy reluctantly agrees and soon discovers Helen holds secrets of her own. In fact, Helen understands Lucy’s predicament better than anyone else.

As the two travel across England, Lucy benefits from Helen’s wisdom as Helen confronts ghosts from her own past. Everything comes to a head at Haworth, home of the Brontë sisters, where Lucy is reminded of the sisters’ beloved heroines who, with tenacity and resolution, endured — even in the midst of impossible circumstances.

Now Lucy must face her past in order to move forward. And while it may hold mistakes and regrets, she will prevail — if only she can step into the life that’s been waiting for her all along.

Heaven Is for Real , Blue Like Jazz , God’s Not Dead , Same Kind of Different as Me *movie coming soon, Unlikely Angel, Miracle in the Mine (movie: 33), Gift Hands, Golf’s Sacred Journey (movie: Seven Days in Utopia), The Color of Rain

What are your favorite movies and books of the year? Leave a comment! We’d love to hear from you!