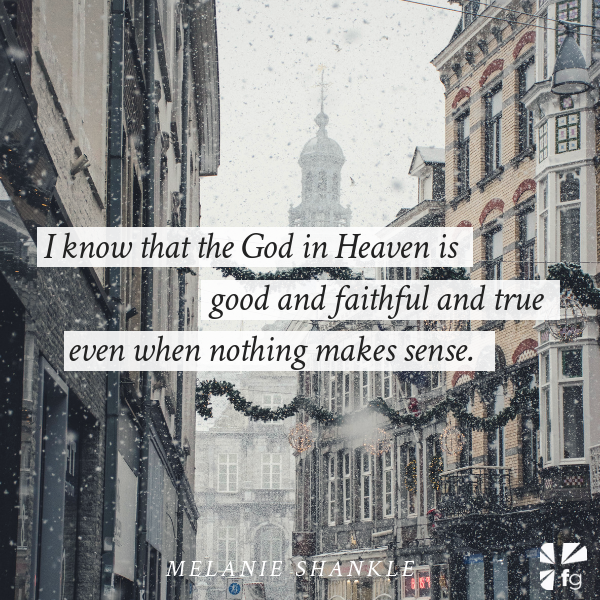 The thief comes only to steal and kill and destroy; I have come that they may have life, and have it to the full. — John 10:10

Several years ago, during December, we took a family trip to New York City. Getting to show Caroline the city at Christmastime will go down as one of my favorite memories ever, especially our visit to Santa Claus at Macy’s on 34th Street. Watching her face light up as she told him what she wanted and Santa taking the extra time to discuss the Percy Jackson books she loved made it one of those magical moments I’ll cherish always. It was one of those rare times when real life surprises you with so much joy.

And I guess that’s part of why I couldn’t stop the tears when we made it back to our hotel later that afternoon and turned on the news and discovered what had occurred earlier that day at Sandy Hook Elementary. Because while I was watching Caroline and my niece, Sarah, experience the very best of childhood magic and wonder, a school of precious littles, just sixty miles away, was experiencing horror beyond comprehension.

Honestly, even all these years later, it’s too much. Too much sadness, too much agony, too much hurt to comprehend.

I hear bad and scary stories about kids and tend to mentally list all the reasons they could never happen to Caroline. I pay attention. I don’t leave her home alone. I don’t let her walk down the block without watching to make sure she arrives safely at her destination. I make sure I know everyone she encounters during a day.

But what happened that day at Sandy Hook shattered any illusion I had of being in control. Those parents dropped their babies off for a day at school. A day that should have been filled with learning to identify verbs in a sentence or adding numbers or eating paste like every other elementary school kid. And the unfathomable happened.

I don’t have any answers because I don’t think we’ll understand this stuff here on earth. But here’s what I do know:

I know that this is not our home.

I know that the God in Heaven is good and faithful and true even when nothing makes sense. And I know that we live in a fallen world filled with sorrow and tragedy and madmen capable of terrible things.

I know that there is no better time than Christmas to remember that God sent His Son into the world to save us all from darkness and sin and certain death. And I know that two thousand years ago, the a Baby’s cry was the holy roar letting evil forever know that weeping may last for a night but joy will come in the morning.

One of the parts of the Christmas story often swept under the rug is the mass murder of innocent children at the hands of a crazed King Herod that caused Joseph and Mary to flee with Jesus to Egypt. There’s no way to make that look pretty. No way to dress that up as part of the manger scene with wise men and shepherds and maybe a cow for good measure.

Yet it’s there, in all its ugliness and darkness. It’s easier to deal with because of time and distance. It’s part of long-ago history. Pictures of those precious faces aren’t strewn all over Facebook, but those babies in Jesus’ time whose lives were cut tragically short left behind parents filled with unimaginable grief.

The truth is that our world is filled with darkness and always has been. Satan comes to steal and kill and destroy. And what feels more destructive and violent than the loss of innocent lives — lives that embody the very tenderness of God, filled with so much light and promise and possibility and freckles scattered across their sweet faces?

I know that we are called to be a light in a dark world. And as much as events like Sandy Hook make me want to wrap my entire family in bubble wrap and spend the rest of our days within the walls of our home, we are called to spread the love of Christ and to share that hope and redemption and peace and purpose beyond what we can imagine available right now. Jesus came to earth in the form of a helpless Baby, but He won’t come back that way.

He’ll come as a conqueror. And evil will be vanquished forever.

“God in Heaven is good and faithful and true even when nothing makes sense.” That enemy… the one who comes to steal, kill, and destroy, the designer of evil and chaos… he has already lost. Jesus’ birth means that joy will come in the morning for every single human who puts their faith in Him. This Christmas season, let’s be reminded of who our King is — the One who won the war for our souls for all eternity and the One who came to bring us life to the full! Come join the conversation on our blog. We want to hear from you! ~ Devotionals Daily