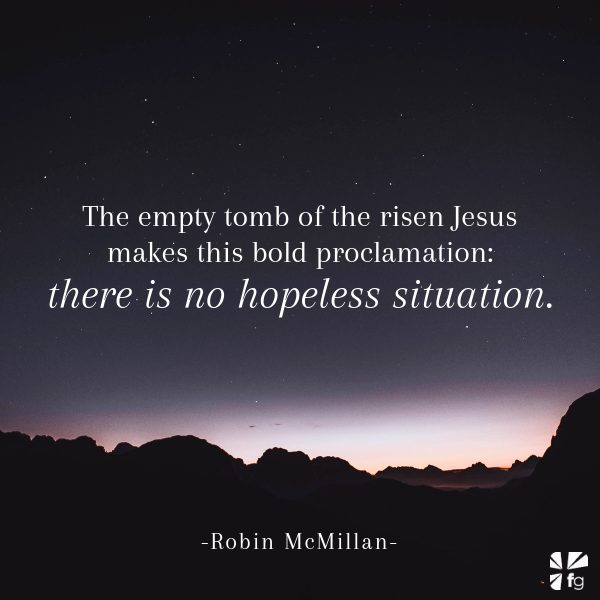 The Bible emphasizes faith, hope, and love as our three essentials. Each is necessary for a vibrant faith, they are different from each other but are related. They are like three sisters. Hope says “I know things will work out, I just don’t know how or when!” Her sister Faith says, “Things have already worked out” (even before they do in actual experience). Love says, “Even if they don’t work out, even if I don’t understand what’s going on, nothing can separate me from the affection God has for me!”

Today let’s look at hope. Hope securely built upon the “better promises” of God has fueled the fire of faith that has produced every major spiritual breakthrough down through the ages. It is so essential. Hope is defined as the confident expectation of good and is based on believing the promises of God. There is no consistent strong faith apart from having a living hope in our hearts, for faith is “the substance of things hoped for” (Hebrews 11:1)!

All of us have the capacity to be filled with hope and it is much closer to us than we often recognize: When we were born again we were translated into a brand-new kingdom — into a “sphere of hope.”

For we were saved in the sphere of hope. But hope that has been seen is not hope, for that which a person sees, why does he hope for it? But if that which we do not see, we hope for, through patience we expectantly wait for it. — Romans 8:24-25 Wuest Trans.

Hope is like a spiritual bubble or sphere. Abiding in that sphere creates attitudes of confidence. It becomes the inward spiritual environment that fortifies our patience and sustains the power of the Holy Spirit in our lives. Because Paul the apostle lived in that hope atmosphere, he boldly proclaimed,

And we know that all things work together for good to those who love God, to those who are the called according to His purpose. — Romans 8:28

Let me give you an example of the power of hope from contemporary history. Dean Smith coached the University of North Carolina basketball team for thirty-six years. He once owned the record for the most victories in NCAA history with 879. He was a highly innovative strategic thinker and had a reputation for being loyal to each of his players. He continued to send regular notes and encouragements to many of them years after they played for him. His positive, hope-filled attitude permeated every aspect of his life.

Dean Smith’s hope was contagious and proved to be the deciding factor in great victories on the court. March 2, 1974, his fourth-ranked Carolina Tar Heels trailed the Duke University Blue Devils by 8 points with seventeen seconds left in the game. Coach Smith called time out, gathered his players around him, looked them in the eyes, and said, “We’re in great shape. We’ve got them right where we want them. Isn’t this fun!”

With that kind of confidence Coach Smith sent his players back on the court into a seemingly impossible situation. Carolina picked up two quick points when Bobby Jones hit two foul shots. They scored on a steal and scored again on a turnover of a Duke inbound pass, shortening the gap to 2 points. After Carolina rebounded on a missed Duke foul shot, Walter Davis hit a last-second thirty-foot bank shot to tie the game, sending it into overtime. The Tar Heels claimed a 96–92 overtime victory that day. Carolina’s win is regarded by many as the greatest comeback victory in college basketball history, inspired by Dean Smith’s unshakable hope.

Hope fuels victory in the face of overwhelming odds and is a “devil”-conquering force!

Hopelessness is a delusion, the consequence of an inaccurate belief system. For many in our generation it is an enormous enemy. But it is an imposter that is the result of believing a lie. Jesus said,

You shall know the truth and the truth shall make you free. — John 8:32

The apostle Paul identified the relationship between what you believe and how it affects you. He wrote,

Now may the God of hope fill you with all joy and peace in believing, that you may abound in hope by the power of the Holy Spirit. — Romans 15:13

Accurate believing produces joy and peace and an abundance of hope. Acknowledging the truth is not sufficient to bring freedom; the truth you believe is the only truth that liberates you. In some cases you may have your facts straight but still be bound because your understanding is inaccurate. Jesus warned, take heed how you hear (Luke 8:18). If you have drawn inaccurate conclusions, you “heard wrong.” Allow the Holy Spirit to interpret reality for you.

Jeremiah, one of the greatest prophets in the Old Testament, walked close to the Lord and was one of His spokesmen in his generation to the nation of Israel. Yet the great prophet was prone to periods of hopelessness and depression. Jeremiah 15:18 details his complaint against the Lord. In despair he questioned,

Why is my pain perpetual and my wound incurable, which refuses to be healed? Will You surely be to me like an unreliable stream, as waters that fail?

Jeremiah accused the Lord of being unreliable, like waters that fail, meaning “waters that cannot be trusted.” God’s response is illuminated in the Amplified Translation:

Therefore thus says the Lord to Jeremiah: “If you return and give up this mistaken tone of distrust and despair, then I will give you again a settled place of quiet and safety, and you will be My minister; and if you separate the precious from the vile cleansing your own heart from unworthy and unwarranted suspicions concerning God’s faithfulness, you shall be My mouthpiece… for I am with you to save and deliver you, says the Lord. And I will deliver you out of the hands of the wicked, and I will redeem you out of the palms of the terrible and ruthless tyrants. — Jeremiah 15:19-21

Jeremiah was affected by a common delusion that the Lord identified as a mistaken tone of distrust and despair. His solution was simple and profound: give it up!.. stop believing the lie, reconsider your conclusions and change your mind.

I would have despaired, unless I had believed that I would see the goodness of the Lord in the land of the living. — Psalm 27:13 NASU

David knew what destroys despair: having an accurate understanding that God is good, and a deep conviction that he would experience that goodness while he lived. Our human tendency is to allow how we feel to affect what we believe. True humility refuses to believe what we think or feel when it contradicts the truth and the revealed nature of God. Having a renewed mind is the key that brings this breakthrough.

Circumstantial deliverance is often preceded by emotional deliverance based on changing our beliefs. Jeremiah’s circumstantial freedom was contingent on first walking in an internal freedom. The Lord promised him a new settled place of quiet and safety on the other side of rejecting his mistaken tone. The term “mistaken tone” reveals how easy it is to misinterpret reality. The prophet’s inaccurate thought process caused him to feel depressed and it distorted his understanding of the nature of God. The Lord also instructed Jeremiah to cleanse himself from suspicions of God’s motives. If Jeremiah made those two internal adjustments, God promised to make him His mouthpiece and would not allow Jeremiah’s ever-present enemies to prevail against him. God would deliver and redeem him.

This generation desperately needs to give up our mistaken tones of distrust and despair and suspicions concerning God’s faithfulness. Don’t let hopelessness steal your joy! Identify the lies that you believe. Replace them with the truth and send despair running for its life.

Eventually Jeremiah changed his mind about what the Lord thinks. Fifteen chapters later Jeremiah discovered the redemptive thoughts of the Lord revealed in this prophetic statement:

For I know the thoughts that I think toward you, says the Lord, thoughts of peace and not of evil, to give you a future and a hope. — Jeremiah 29:10-11

What does God think of us? His thoughts toward us are thoughts of peace and not of evil, to give us a future and a hope. Hope is built into the DNA of the gospel. Though human hope may have died the day Jesus was crucified, transcendent unconquerable hope emerged from the tomb in the person of the resurrected man, Christ Jesus. The empty tomb of the risen Jesus makes this bold proclamation: there is no hopeless situation. Let that hope arise in your hearts right now. It is already there ready to spring into living faith!

Written for Devotionals Daily by Robin McMillan, author of Harbinger of Hope.

“Acknowledging the truth is not sufficient to bring freedom; the truth you believe is the only truth that liberates you.” What do you actually believe? Let’s give up our mistaken tones of distrust and despair and suspicions concerning God’s faithfulness. Let’s not let hopelessness steal our joy! Come share your thoughts with us on our blog. We want to hear from you! ~ Devotionals Daily