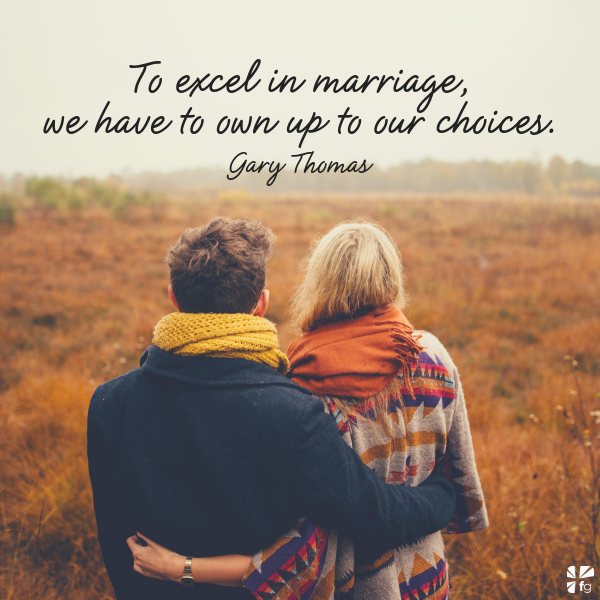 “I take thee to be my wedded [wife/husband].”

What I am about to say has been considered somewhat controversial. Normally, I’d try to avoid controversy in an inspirational book like this, but the point is particularly well worth making at this stage in your life.

In general, God doesn’t, and won’t, tell us who to marry. We don’t see in Scripture that it would be disobedient not to marry any one particular individual. There is no command in the Bible that says, “You must get married.” And there is certainly no command, “Greg must marry Susan.”

God is a sovereign God, and it is wise to seek His guidance, but that doesn’t mean He promises to tell us the exact person we should marry. On your wedding day, you are making a choice. The best platform on which to build a monumental marriage is one in which you own this choice instead of putting it off on God.

In 1 Corinthians 7:39, the apostle Paul asked widows to consider staying single (explaining that it’s their choice whether they want to marry again or not) and then told them that such a woman is free to marry “anyone she wishes” as long as her potential husband “belongs to the Lord.”

If the Bible explicitly says, “It’s your call whether or not to get married” (a sentiment Jesus echoed when he said some “choose” to become eunuchs — that is, live a celibate life — in Matthew 19:12, with emphasis on the word “choose”) and it’s entirely your choice as to who to marry, this tells us that a marriage choice is part of God’s permissible will.

In other words, He lets us choose.

Is it possible God has told a couple to get married? Look: I’m not going to put God in a box I can’t say, “He can do this but he can never do that.” All I can say is that the clearest scriptural teaching makes marriage our choice — both as to whether we get married and to whom we marry. Presuming that you’ve somehow identified “the one” and can therefore ignore clear biblical teaching is risky and foolish.

While the Bible is silent on how you can definitively know who you’re “supposed” to marry, it does talk about the process of making wise decisions — applying biblical principles, seeking wise counsel, being deliberate and wise in your choice, considering the future, and basing your decision on the right priorities. That’s a better foundation on which to base a lifelong marriage than trying to second-guess some divine design.

Why does this matter?

To excel in marriage, we have to own up to our choices — why we made them and how to be responsible in the face of them.

I have seen way too many couples enter into a difficult season of marriage and then blame God for “making” them marry the spouses who seem to be causing them so much pain. They treat God as their enemy, just when they need Him to be their truest friend.

Also, the virtues of kindness, faithfulness, and goodness demand that if I convince someone to marry me, or agree to marry someone, knowing it is a lifetime commitment, knowing it would be beyond complicated to dissolve the union, I need to step up to face the lifetime consequences. That means not just staying married but staying engaged in the marriage, working to make it the best for my spouse that I can.

Spiritually, I want you to accept the clear teaching of Scripture: “Whether I get married is up to me. Paul and Jesus both say singleness can be a legitimate choice. And Proverbs 31 as well as 1 Corinthians 7:39 clearly teach that I get to choose the kind of person I want to marry. So, I’m making this choice in freedom You are the person I want to, and choose to, marry.”

In a way, this is more romantic, not less. Revel in the joy of this spiritual reality! Look each other in the eyes and say, “I choose you! God says I can choose anyone, but I don’t want anyone else. I want you. For the rest of my life, I choose you!”

Heavenly Father, thank You for giving us the freedom to choose who we spend this life with. I thank You for the circumstances that led us to meet, and I thank You for the wonderful gift my future spouse is giving me by choosing to marry me. On our special day when we get married, I realize I am making a choice. Prepare my heart to be faithful and true to that choice. In Jesus’ name, amen.

In what ways does it sound even more romantic that God freely lets you choose to marry whomever you wish?

Why do you think it is important to “own” your choice about who you’re marrying? How might this affect the way you at marriage?

Talk about why you think marrying each other is a particularly wise choice for each one of you.

Excerpted with permission from Preparing Your Heart for Marriage by Gary Thomas, copyright Gary L. Thomas.

You get to choose! God leaves who you want to marry up to you. Isn’t that so kind of Him? He wants you to find someone you choose not just to stay married to, but to make it the best for your future spouse that you possibly can. Who do you choose? Come share with us on our blog. We want to hear from you! ~ Devotionals Daily