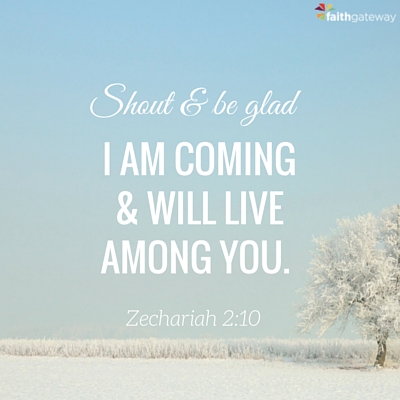 Shout and be glad. I am coming and I will live among you. — Zechariah 2:10

Therefore do not let anyone judge you by what you eat or drink, or with regard to a religious festival, a New Moon celebration or a Sabbath day. These are a shadow of the things that were to come; the reality, however, is found in Christ. — Colossians 2:16–17

As we continue our journey to the heart of Christmas, let’s pause for a moment to consider a common concern raised each year regarding the validity of celebrating Christ’s coming — namely, that when Christmas was originally instituted, December 25 was a pagan festival commemorating the birthday of a false god.

In response we should first acknowledge that this is substantially true. As noted by Dr. Paul Maier, eminent professor of ancient history at Western Michigan University, “The Romans of the time not only celebrated their Saturnalia festival at the close of December, but they also thought that December 25 marked the date of the winter solstice (instead of December 21), when they observed the pagan feast of Sol Invictus, the Unconquerable Sun, which was just in the act of turning about to aim northward once again.”

While this is indeed a historical fact, what is frequently overlooked is the reason the early Christian church chose December 25 as their day of celebration. The purpose was not to Christianize a time of pagan revelry, but to establish a rival celebration.

As such, Christmas (from Old English Crīstes +mœ ̄sse “Christ’s festival”) was designated as a spiritually edifying holiday (holy day) on which to proclaim the supremacy of the Son of God over superstitions concerning such gods as Saturn, the god of agriculture, and Sol Invictus, the unconquerable sun god.

While the world has all but forgotten the Greco-Roman gods of antiquity, it is annually reminded that two thousand years ago Christ, the hope of humanity, invaded time and space. But as Christians we perceive an even greater reality. Each year as we celebrate the First Advent of Christ, we are simultaneously reminded of the Second Advent in which the old order of things will pass away and Christ our Lord will put all things to right. As the prophet Zechariah put it,

‘Shout and be glad, O Daughter of Zion. For I am coming, and I will live among you,’ declares the LORD. ‘Many nations will be joined with the LORD in that day and will become my people. I will live among you and you will know that the Lord Almighty has sent me to you.’ — Zechariah 2:10–11

If you cannot celebrate this, pray tell, what can you celebrate?

While Paul was waiting for [Silas and Timothy] in Athens, he was greatly distressed to see that the city was full of idols. So he reasoned in the synagogue with the Jews and the God-fearing Greeks, as well as in the marketplace day by day with those who happened to be there. A group of Epicurean and Stoic philosophers began to dispute with him. Some of them asked, What is this babbler trying to say? Others remarked, He seems to be advocating foreign gods. They said this because Paul was preaching the good news about Jesus and the resurrection. Then they took him and brought him to a meeting of the Areopagus, where they said to him, May we know what this new teaching is that you are presenting? You are bringing some strange ideas to our ears, and we want to know what they mean.” (All the Athenians and the foreigners who lived there spent their time doing nothing but talking about and listening to the latest ideas.)

Paul then stood up in the meeting of the Areopagus and said: Men of Athens! I see that in every way you are very religious. For as I walked around and looked carefully at your objects of worship, I even found an altar with this inscription: TO AN UNKNOWN GOD . Now what you worship as something unknown I am going to proclaim to you.

The God who made the world and everything in it is the Lord of heaven and earth and does not live in temples built by hands. And He is not served by human hands, as if He needed anything, because He himself gives all men life and breath and everything else. From one man He made every nation of men, that they should inhabit the whole earth; and He determined the times set for them and the exact places where they should live. God did this so that men would seek Him and perhaps reach out for Him and find Him, though He is not far from each one of us. ‘For in Him we live and move and have our being.’ As some of your own poets have said, ‘We are His offspring.’

“Therefore since we are God’s offspring, we should not think that the Divine Being is like gold or silver or stone — an image made by man’s design and skill. In the past God overlooked such ignorance, but now He commands all people everywhere to repent. For He has set a day when He will judge the world with justice by the man He has appointed. He has given proof of this to all men by raising Him from the dead.”

When they heard about the resurrection of the dead, some of them sneered, but others said, We want to hear you again on this subject. At that, Paul left the Council. A few men became followers of Paul and believed. Among them was Dionysius, a member of the Areopagus, also a woman named Damaris, and a number of others. – Acts 17:16–34

Angels From the Realms of Glory

Angels from the realms of glory,

Wing your flight o’er all the earth;

Shepherds in the field abiding,

Watching o’er your flocks by night,

God with us is now residing;

Seek the great Desire of nations;

Ye have seen His natal star.

Saints, before the altar bending,

Watching long in hope and fear;

In His temple shall appear.

As we Christians celebrate the First Advent of Christ, let us also be reminded of “the Second Advent in which the old order of things will pass away and Christ our Lord will put all things to right.” How does the hope set before us change how we celebrate Christmas? What better time than Advent to share your faith with others? Spend some time today thinking about who in your life needs to hear the Good News and how you can utilize today’s cultural themes, religions, poetry, music, art, and pop-culture as a segue for evangelism as Paul did! Join the conversation on our blog and share your ideas for evangelism! We’d love to hear from you! ~ Devotionals Daily