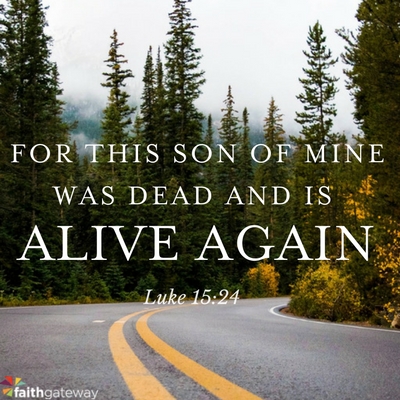 The Prodigal Son parable is without dispute one of the finest examples of storytelling ever — with its penetrating appeal to hearers’ emotions and imaginations; its succinct, tightly crafted form; and its powerful and personally engaging message. — John MacArthur

Imagine that you are being criticized for doing something that you know is right — something not just okay but deeply good. How do you respond to this criticism? You might feel hurt, angry, or defensive. You might be tempted to lash out at your critics or to retreat and avoid the conflict. Or, if you’re Jesus, you might calmly tell several brief stories that express why you’re doing what you’re doing.

Jesus didn’t tell these stories because He was incapable of carrying on a direct debate. In fact, He had previously tried talking to His critics using plain language. But that had only served to inflame them so much that they plotted His death long before the time for His self-sacrifice was ripe. So Jesus resorted to speaking to His opponents in stories, where the point was clear to anyone who took the trouble to think them through.

This is the setting in which Jesus told one of His most famous stories: the parable of the prodigal son.

Go around the group and invite everyone to introduce himself or herself, and then answer the following questions:

Read Luke 15 aloud in the group. (You might have a different person read each paragraph.)

If you’ve read these parables before, try to open yourself to them and their context with fresh eyes and a receptive heart. Let the wonder of God’s grace fill you through these simple but powerful words.

1 Then all the tax collectors and the sinners drew near to Him to hear Him. 2 And the Pharisees and scribes complained, saying, “This Man receives sinners and eats with them.” 3 So He spoke this parable to them, saying: 4 “What man of you, having a hundred sheep, if he loses one of them, does not leave the ninety-nine in the wilderness, and go after the one which is lost until he finds it? 5 And when he has found it, he lays it on his shoulders, rejoicing. 6 And when he comes home, he calls together his friends and neighbors, saying to them, ‘Rejoice with me, for I have found my sheep which was lost!’ 7 I say to you that likewise there will be more joy in heaven over one sinner who repents than over ninety-nine just persons who need no repentance.

8 “Or what woman, having ten silver coins, if she loses one coin, does not light a lamp, sweep the house, and search carefully until she finds it? 9 And when she has found it, she calls her friends and neighbors together, saying, ‘Rejoice with me, for I have found the piece which I lost!’ 10 Likewise, I say to you, there is joy in the presence of the angels of God over one sinner who repents.”

11 Then He said: “A certain man had two sons. 12 And the younger of them said to his father, ‘Father, give me the portion of goods that falls to me.’ So he divided to them his livelihood. 13 And not many days after, the younger son gathered all together, journeyed to a far country, and there wasted his possessions with prodigal living. 14 But when he had spent all, there arose a severe famine in that land, and he began to be in want. 15 Then he went and joined himself to a citizen of that country, and he sent him into his fields to feed swine. 16 And he would gladly have filled his stomach with the pods that the swine ate, and no one gave him anything.

17 “But when he came to himself, he said, ‘How many of my father’s hired servants have bread enough and to spare, and I perish with hunger! 18 I will arise and go to my father, and will say to him, “Father, I have sinned against heaven and before you, 19 and I am no longer worthy to be called your son. Make me like one of your hired servants.” ’

20 “And he arose and came to his father. But when he was still a great way off, his father saw him and had compassion, and ran and fell on his neck and kissed him. 21 And the son said to him, ‘Father, I have sinned against heaven and in your sight, and am no longer worthy to be called your son.’

22 “But the father said to his servants, ‘Bring out the best robe and put it on him, and put a ring on his hand and sandals on his feet. 23 And bring the fatted calf here and kill it, and let us eat and be merry; 24 for this my son was dead and is alive again; he was lost and is found.’ And they began to be merry.

25 “Now his older son was in the field. And as he came and drew near to the house, he heard music and dancing. 26 So he called one of the servants and asked what these things meant. 27 And he said to him, ‘Your brother has come, and because he has received him safe and sound, your father has killed the fatted calf.’

28 “But he was angry and would not go in. Therefore his father came out and pleaded with him. 29 So he answered and said to his father, ‘Lo, these many years I have been serving you; I never transgressed your commandment at any time; and yet you never gave me a young goat, that I might make merry with my friends. 30 But as soon as this son of yours came, who has devoured your livelihood with harlots, you killed the fatted calf for him.’

31 “And he said to him, ‘Son, you are always with me, and all that I have is yours. 32 It was right that we should make merry and be glad, for your brother was dead and is alive again, and was lost and is found.’ ”

Turn to the person next to you and take turns sharing your answers to the following questions:

Play the video teaching segment for session 1. As you watch, use the following outline to record any thoughts or concepts that stand out to you.

The word parable comes from a Greek term that means to lay something alongside. In a parable, Jesus put a story alongside a spiritual truth to make that spiritual truth clear. All parables have one main idea. The main idea in this parable is that the Pharisees and scribes — the religious leaders of Israel who thought they knew and represented God — had no knowledge of the mind or heart of God. Jesus, who is God, was preaching the gospel to the lowlifes of his day, and they repented of their sin. The leaders of Israel were irate about this.

God rejoices in the repentance of sinners, not in the self-righteousness of hypocrites.

Jesus told the three stories in Luke 15 out of mercy. He told them to the wrongdoing scribes and Pharisees as a warning that they were out of touch with God.

The prodigal son was the worst sinner that Jesus could have invented. He was outrageous, but in the end he finds reconciliation with the father.

The reconciling father is Jesus Christ, who receives the most extreme sinner.

The older brother is the Pharisees and the scribes, who were angry at the father’s forgiveness. These religious hypocrites thought they were earning their way into heaven and had no concept of grace.

There are only two possibilities: either we seek to receive salvation by our own righteous deeds or we go to God repentant, recognizing our sin, and receive the grace of a reconciling Father.

If we are depending on our works to earn our way into God’s favor, it won’t happen. Salvation is a gift of grace that comes when we repent, because Christ has paid the penalty for our sin.

Opening Up to the Parable

For this activity, each participant will need a blank piece of paper and a pen. The group leader will also need an empty pot or bowl.

The scribes and Pharisees viewed certain types of people as unworthy of God’s favor, and they were angry when those people showed signs of repentance. In their eyes, the tax collectors and other notorious sinners shouldn’t and couldn’t be forgiven. Is there any person or type of person (a religious group, political group, ethnic group, a criminal) that you see as unforgivable? Or a person you’ve given up praying about for repentance?

Write the name of the group or individual on the piece of paper you’ve been given. No one will read it except you.

Now pass the pot or bowl around to all participants. Let each person tear up their paper into small pieces and place them in the pot as a sign of releasing judgment over that person or group.

Close the session by praying together. First, invite any person who has a prayer request to share it. Ask that individual how the group could best pray for him or her. Next, let one or several people pray for the people they identified on their pieces of paper. Ask God to extend mercy even to those individuals for whom it is difficult for you to pray. Finally, pray for the person on your left, asking that he or she will experience an abundance of God’s grace this week.

Come share your thoughts with us on the blog. We want to hear from you!