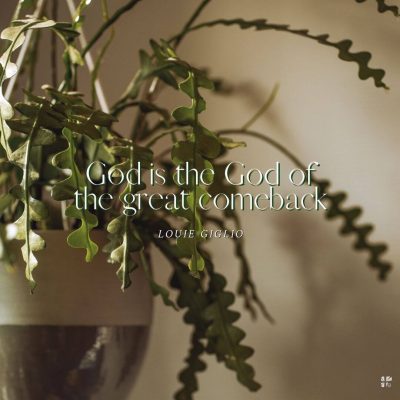 Think about the story of the thief on the cross. We see in Luke 23:32-33 that even in Jesus’ last hours on earth, God chose to put Jesus in close proximity to two really messed-up people, two common criminals.

One of the criminals hanging alongside Jesus hurled taunts at Him. Think of it: in his last moments of life, as his last act in the world, this dying man — a thief — chose to wound another person by insulting Him.

The way a crucifixion went down is that they nailed you to a wooden cross and you hung there by the spikes driven through your hands and feet. The weight of your body caused your chest to sag, putting enormous pressure on your lungs. The only way you could breathe was to push up against the nails in your feet to lift your body enough to take a quick gulp of air. Eventually the pain exhausted you until you no longer had the strength to push up and breathe. Sometimes you would die by blood loss, if your earlier beatings had been severe enough, but usually a person died by suffocation. Depending on what physical shape you were in, you might hang on a cross for days, gasping for air. If your death took that long, eventually a soldier would break your shins. You’d no longer have the ability to push yourself up to breathe, so you’d die more quickly.

Picture the thief who was flinging insults at Jesus. He only had a few breaths left, but he was using all his strength to lift himself up so he could gasp for air and spit out some final words of insult to someone else. That was how much pain he was in. His life was so full of hatred and hurt that insulting others had become his default action.

Some of us today understand what it’s like to hurt that much. So many wounds have been inflicted on us over the years that all we know how to do is to strike back. Retaliation has become our form of self-preservation. Wounding others has become our defense mechanism by which we’ll somehow stay safe.

But here’s a contrast. There were two criminals on the crosses beside Jesus. One was insulting Jesus. Guess what the other criminal was doing?

But the other rebuked him, saying, “Do you not fear God, since you are under the same sentence of condemnation? And we indeed justly, for we are receiving the due reward of our deeds; but this Man has done nothing wrong.” — Luke 23:40-41

I would love to know if more words followed. If I’d been that guy, I would have turned to the scornful thief and said, “Will you just shut up? What are you thinking?! You’re hurling insults at God! Today we’re going to die, and you’re telling me you don’t even fear God now?”

The second thief understood the gravity of the moment. Maybe he’d heard Jesus teach or seen Jesus do a miracle. He had somehow connected the dots. He understood so deeply what Jesus was about that in Luke 23:42, the thief’s final recorded words are this poignant plea:

Jesus, remember me when you come into Your Kingdom.

A nine-word prayer. It wasn’t a grand theological statement, and it might have been the only prayer this thief ever prayed in his life, yet it demonstrated that he had a clear view in his heart of who Jesus was.

Have you ever prayed a similar prayer? Jesus, please remember me.

Isn’t that really what all of us are hoping for today? That somehow God hasn’t forgotten us in this crazy world? The great news is that Jesus met the praying thief exactly where he was. Jesus answered,

WELCOME TO THE GARBAGE DUMP

Historians and archaeologists tell us that the little section of land called Golgotha, where Jesus was crucified, was actually a landfill.

Have you ever seen a landfill up close? Flies buzzing around. A bad smell in the air. Everywhere you look is pile after pile of rotting, stinking trash. And Golgotha was the worst sort of primitive, barbaric landfill possible.

When the Romans were crucifying criminals, often there’d be nobody around afterward to claim the bodies. Nobody wanted anything to do with folks who’d been in trouble with the law. So the soldiers would peel the bodies off the beams and toss the corpses into the garbage heap. Then the wild dogs and other feral animals on the outskirts of the city would eat the flesh off the bones. That’s the place where Jesus was crucified.

The fact that Jesus told the thief on the cross, “You will be with Me in paradise,” is highly significant for you and me. We may be living in a garbage dump today, but paradise can still find us. Our lives may be disgustingly messy and flies may buzz all around us, but Jesus is always near.

There’s always hope. If the life of someone we know looks completely messed up, we don’t need to count that person out. God is the God of the great comeback.

How does a great comeback begin? It springs from a heart that believes enough to pray: Jesus, please remember me. That prayer only requires a breath. We don’t need to be high and mighty to get to Heaven. We get to Heaven because of a simple prayer of faith.

In that prayer we acknowledge that we have nothing to offer God. We come to Jesus as helpless in our pain and despair. We look at Jesus on the cross beside us and say, “You’re God. You’re innocent of any crimes. You could get down off that cross if you wanted, but You’re there by choice for a purpose. Will You please remember me?”

Sometimes people put more words around that prayer — and that’s fine. You might understand more about spiritual matters than the thief did. Maybe you grew up around Scripture and you know we’ve all sinned and fallen short of the glory of God (Romans 3:23). Maybe you know that the wages of sin is death (Romans 6:23), but Christ came to take away our sin (1 John 3:5) and His sacrifice removes the stain of our sin (Hebrews 9:28). That’s wonderful if you know those things.

But if all you know is that Jesus was innocent but crucified for things you had a part in doing, and if you believe He stayed on that cross for a reason, and if you just want Jesus to remember you, then your prayer is heard.

Jesus is not put off by the stench. Jesus will bring paradise even to a garbage dump.

None of us have lives that are perfectly put together. Thank Jesus that those are exactly the people Jesus goes straight toward! He wants you, He loves you, He lived for you, He died for you! Your prayer, wordy or not, simple or not, is heard by Him! ~ Devotionals Daily