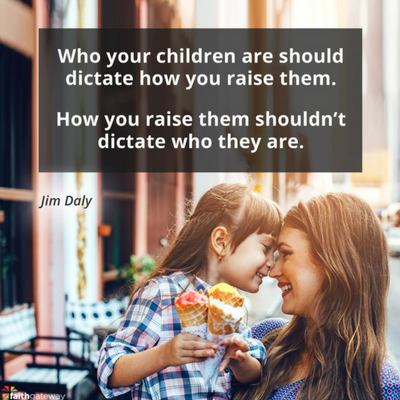 We’ve established that perfection is the enemy of parenting. We know that the key to developing a good home life isn’t pushing your kids to get all A’s or asking them to habitually knock in the winning run.

We need to take our cues from Jesus.

Just as grace is critical in our spiritual life, so it is in our family life. We need to be ready to show this grace to our kids, to our spouses, and even to ourselves. We need to push away the concept of mistake-free families and wrap our arms around a messier way of doing things. And we need to understand that even when we don’t do everything right, we can help grow loving, virtuous, successful children.

But before you start cracking out the Kool-Aid and Cheerios, let’s take a step back. I’m advocating imperfect parenting, not indifferent parenting. We shouldn’t slavishly focus on the rules of the parenting game, but there are some pretty good guidelines we should pay attention to.

I believe most well-functioning families follow a few fundamental principles, which create the framework to better deal with some of the more insidious problems of parenting. These tools can help us push back on the stress, sorrow, and blame that often come with perfection-driven parenting. If the family is a car, these fundamentals are your socket set. If the family is a garden, these are your spade, hoe, and watering bucket. If you have these tools, you have the ability to address the issues of perfectionism — and the stress, sorrow, and blame that accompany them — that can infect even the seemingly best of families. But before you whip out this tool set and start cranking or digging or working on whatever needs fixing, there’s one critical first step: knowing what — or, in this case, who — you’re working with.

I’m often surprised by how many parents believe that children are essentially like sugar cookies: give them all the same ingredients, cut them the same way, bake them at the same temperature — and they’re bound to come out the same.

Long-time parents know that’s not true. Not by a long shot. But even when we know our kids are different, we sometimes get frustrated when they don’t have the same talents and aptitudes as their brothers or sisters, or even their parents. If little Lisa is capable of straight A’s, well, little Maggie should be able to do the same. If Tommy was homecoming king, Timmy should at least be in the running. This assumption — that our kids all should excel in the same areas (especially if those areas are also important to us parents) — can lead to one of the most damning parental put-downs in our arsenal: “Why can’t you be more like [fill in the blank]?”

And even though we know our children differ tremendously from one another, we often still try to use the very same techniques to raise them. We use the same bribes. We unleash the same punishments. We shout at the same volume.

In some ways, this makes sense. It seems fair. We don’t want to treat our kids differently, after all. We don’t want to show favoritism. But while we may be exceedingly fair when we use the same carrots and sticks, we’re often not as effective. Some children rise to the challenge when Mom pushes them to work harder in school. But some kids might block out the challenge or even come away feeling hopeless.

Some kids might respond to a quiet heart-to-heart but completely rebel when facing a punishment, while other children might need that punishment to get the point. You just don’t know — unless you know your kids. Dr. Tim Elmore told me one time that, as a father, he plays chess, not checkers, in his home. “When you play checkers, every piece is alike,” he said. “You play chess, you’d better know what each piece can do.”

If you followed the checkers assumption, you might assume my two sons, Trent and Troy, would be as alike as they could be. They had the same mom and dad, and they were born just two years apart. They’re growing up in the same environment and going to the same school. They needed glasses about the same time, and they do indeed share a lot of the same interests. But spend an afternoon with each of them, and you’ll know you’re in the company of two very different kids.

Trent, my older son, looks more like me. But his personality is more like Jean’s, which might help explain why they sometimes clash. He’s very thoughtful, very intense. He’s super-smart — maybe the smartest one in the whole family, in fact — but he struggles sometimes in school. And even though he looks the most like me in the family, we’re very different people.

I played football growing up and played quarterback for my high school in Yucca Valley. I loved the game. Still do. And when Trent was in elementary school, I noticed he was already getting big — looking a lot like I did at that age. And already, I thought, I bet he’s gonna be a football player. And so when he’d talk about running around with his friends at recess, I’m assuming there are balls involved — footballs, baseballs. There’d have to be, right? He’s a Daly kid!

Then one day when he’s in fifth grade, Trent comes home from school very, very excited. On top of the world. “Dad!” he says, running up to me. “I won a gold medal!” I’m thinking, Well, of course you did! You’ve got your father’s athletic genes.

I don’t think Trent saw that flash of disappointment cross my face, but that’s what I felt. Chess? I thought. That doesn’t sound like a Daly. I wasn’t disappointed so much by Trent’s being involved in chess as by the fact that he wasn’t turning into a little mini-me. He might’ve been my son. He might look like me. But he was turning into his own person. And in that moment, I had a quick decision to make — to encourage him to be more like me or to celebrate his own interests.

“Wow!” I told him. “You got a gold medal in chess? That’s INCREDIBLE!”

Troy, meanwhile, looks more like Jean but acts more like me. He’s more competitive: Outward accolades, like grades or the praise of his parents, really mean a lot to him. But he’s more easygoing too, a lighthearted, joyful, and roll-with-the-punches kind of guy. Trent is less likely to roll with a punch as he is to lean into it — just to prove how much he can take.

Troy seems to excel at almost everything he puts his mind to. And even though Trent has always been the more physically dominant of the two, Troy’s actually thicker and in some ways bigger than Trent. Trent is taller but not as hefty. We’ve got a speed bag and a punching bag down in our basement, and when Troy hits the punching bag, the whole thing moves a few inches. I’ve been telling Trent lately to not mess with Troy too much. “He’s such a nice guy,” I say, “but if you push him too far and he lands a punch, he’ll knock you out.”

You can see their differences really play out in how they’ve always dealt with physical contact. Troy is Mr. Toucher. All his life, he’s loved to hug and to wrestle. He’d plop right in my lap and snuggle into my neck. In fact, even now that he’s fourteen, he still does that. He just sits right in my lap as I prep for work in the morning. That kid is a “feel” guy.

But Trent has always been very nonphysical, especially when he was younger. He couldn’t hug. If you tried, it was like hugging a cardboard statue. You’d go to hug him, and he wouldn’t even put his arms around you.

You can change those inborn characteristics to some extent. When Trent was younger, I told myself, I’m going to teach this boy how to have tactile interaction. How to touch. So I went out of my way to caress his back, to tickle him, to run my hands through his hair, to give him a hug every morning when he got up. It was a process. And then before too long, he was the one initiating it. He was coming up and hugging me.

But while you can change your children — bring some of their characteristics into a more healthy equilibrium — you can’t change everything about them. They are who they are. The rules and guidelines we impose on them as parents are supposed to help guide them, not change them.

It’s so important to know who your child is. If you don’t know, you’re going to miss so much. Those clues are so critical to bonding with that child, to raising that child, to loving that child. They’re like a trail of bread crumbs that the Lord puts right in front of you. When you see those bread crumbs, it’s important to do something with them. Recognize them. Once you know your children, you can dive into the real work of raising them well. You pull out those tools of yours — the habits you foster, the skills you grow, the little parenting tricks you learn — to coach your boys and girls into becoming the great men and women you know they can be.

Most of us parents feel like tremendous failures at some point or another. We’re just never going to raise our children without making mistakes, even big ones. How are you embracing grace even while you continue to be the best parent you can be? Come share with us in the comments. We would love to hear from you!