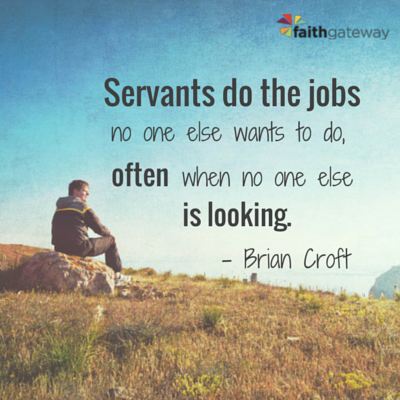 No doubt, the bar for greatness in the kingdom of God in our eyes is set by these giants of our faith. The lives of pastors like Jonathan Edwards, John Bunyan, Charles Spurgeon, and Richard Baxter; evangelists like George Whitefield and John Wesley; missionaries like William Carey, John Paton, and Adoniram Judson; Reformers like John Calvin and Martin Luther; and theologians like Augustine, John Owen, and B. B. Warfield all increase our desire to do something great for the sake of Christ, as well as to be found faithful in the end by our Redeemer. Yet, what does it mean to be faithful to the end? What does true greatness look like in the eyes of our Savior and King?

Whether we evaluate someone’s ministry from the past or in the present, we tend to rate the greatness of the evangelist based on how many people were converted under his ministry. We crown theologians as those with the greatest impact on history and the church based on the insightfulness of their writings and how much they published. We celebrate missionaries and highlight their accounts of sufferings, conversions, and churches planted. We idolize pastors who preached to the masses or wrote books that were notable or memorable.

In other words, we end up defining greatness much like the world does — by how grand, glamorous, and broad an impact an individual had in their life and ministry.

Yet the Bible’s definitions of greatness and faithfulness seem much different. The classic example of this paradox of worldly and godly greatness can be seen in Jesus’ response to His disciples as they argued about who among them would be greatest in the kingdom of God (Mark 9:33 – 37; 10:35 – 40). Jesus shattered their understanding of greatness by saying, “Whoever wants to become great among you must be your servant” (Mark 10:43).

Servants do the jobs no one else wants to do. And they often do them when no one else is looking.

This, along with several similar biblical texts, raises a question:

What if God evaluates the success or failure of a ministry differently than we do?

What if God were to measure an evangelist’s faithfulness, not based on the amount of conversions he saw in his ministry, but on his daily commitment to walk with God? What if God determined the greatness of a missionary, not based on the global effects of his ministry, but on his relentless pursuit of godliness and his battle against sin and the Enemy? What if God evaluated the faithfulness and greatness of a pastor, not simply by the successes of his local church ministry, but by how well he cared for and pastored his own family — his wife and his children?

For many pastors and church leaders, the care of the family seems to fall under that category of plain, servantlike grunt work that goes largely unnoticed when we assess the greatness of our heroes of the past. If you doubt this is true, try comparing how much you know about the family lives of these celebrated men to the content of their teaching or the impact of their ministries. As I began doing research for this book, I talked with some well-known church historians, and they all told me the same thing when I asked about several of the notable leaders of the past: “There just isn’t much out there about their families.”

So I think it’s safe to assume that our process for determining if someone is “great and faithful” in ministry is typically not dependent on whether these men were faithful to love their wives and shepherd their children.

The classic example is found in the contrast between the ministry of the eighteenth-century evangelist and pastor John Wesley and his marriage. Wesley is celebrated for how God used him to bring about the conversion of many people throughout the United Kingdom and America. He started the far-reaching Methodist movement that is still active today. Yet Wesley was not shy when articulating his view of marriage. He wrote these words in a journal entry on March 19, 1751: “I cannot understand how a Methodist preacher can answer it [sic] to God to preach one sermon or travel one day less in a married than in a single state. In this respect surely ‘it remaineth that they who have wives be as though they had none.’ ”

Wesley wrote this comment just one month into his marriage, and unfortunately, his “disdain” for marriage did not seem to wane over the years that followed. Years later, Wesley wrote to a young preacher about to be married to discourage the efforts of his future bride who might seek to prevent him from traveling to preach. Wesley’s marriage philosophy proved to have the expected ramifications. His relationship with his own wife was a mess for most of their lives, which led to her efforts to sabotage his reputation and ministry on numerous occasions. Based on what little we know of Wesley’s wife, Molly, she does not appear to be the most spiritually sound, warm, and gracious of individuals. Nevertheless, John Wesley’s treatment of her throughout their marriage, and what appears to be his complete disregard of the biblical mandates to care for his wife, should have ruined him, his reputation, and his legacy.

Yet for most Methodist churchgoers today, Wesley’s horrific marriage is commonly overlooked.

Lest we assume Wesley’s views were simply a product of his theology, we should note that one of his contemporaries also struggled with marriage. Although John Wesley and George Whitefield contended with one another over the doctrines of Calvinism, they shared common ground in their view of marriage and its purpose in their lives and ministries. George Whitefield delayed marriage for many years because he did not want marriage to hinder his highly demanding preaching ministry throughout the world. When he finally entered into marriage, it was with the understanding that his marriage to Elizabeth James would “not be allowed to hinder his ministry in the least.” Of course, any married man knows this sentiment is not a realistic expectation on which to build a solid foundation for love and respect, and this faulty supposition led to further disappointment and reinforced his view that marriage was a bothersome hindrance to ministry.

Missionaries have also struggled with the challenges of ministry and marriage, often giving a theological rationale for their decision to prioritize evangelism and ministry over the care of their families. The man given the distinguished title of “the Father of Modern Missions,” William Carey, almost abandoned his pregnant wife, Dorothy, and his children to pursue his missionary work in India. Carey’s wife did eventually concede to go, but his lack of care for her and the rigors of missionary life drove her to experience depression, psychological issues, and eventual insanity.

Our point in sharing these examples from the past is not to criticize the particular decisions and choices these men made. It is simply to point out that the temptation to prioritize ministry over family is not new. These are men whom we celebrate as great and faithful laborers for the sake of Christ, but whose marriages and families were sacrificed — for noble reasons — on the altar of their ministry.

Their apparent failures as husbands and fathers should not lead us to discount all that the Lord did through these men. God uses sinful, imperfect men and women to bring about His sovereign purposes for His glory, and He has done this throughout history and continues to do it today. Still, these examples point to the fact that the temptation to elevate ministry concerns above family commitments is a persistent problem, one that is easily ignored in our current church culture.

We tend to ignore the failed examples of these men with regard to their responsibilities as husbands and fathers simply because they did “great things” for God.

And it is all too easy to make the same mistake in our own churches and in our own families.

My point is not to dredge up mistakes of the past. It’s to suggest that the temptations a pastor or church leader faces to neglect his family for the sake of greater and more fruitful ministry are nothing new. Any pastor, missionary, or evangelist who burns with passion to do great things for God will sense this tension. It’s symptomatic of the cultural disconnect between our public success in ministry and our more private family life. And unfortunately, this disconnect is rooted in something even more powerful than our contemporary church culture.

The problem must be diagnosed before we can determine the solution.

Why do so many pastors struggle to balance the call to shepherd faithfully the church with the call to care responsibly and lovingly for their wives and children? Why is this so hard?  What lies within the hearts of those called to shepherd God’s people?

Excerpted with permission from The Pastor’s Family: Shepherding Your Family Through The Challenges Of Pastoral Ministry by Brian and Cara Croft, copyright Zondervan, 2013.

Most married pastors struggle with balancing nurturing a healthy marriage and family and serving their church faithfully. Have you ever wondered if it’s possible to successfully juggle marriage and ministry?