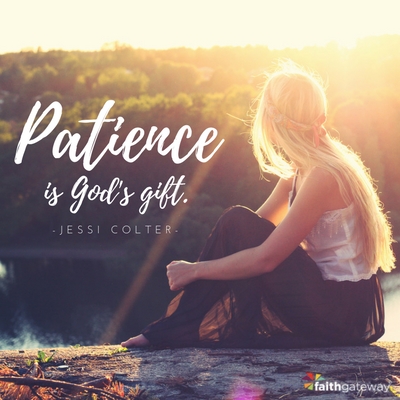 After a whirlwind life of almost unimaginable creative excitement — a life marked by extreme highs and devastating lows — my husband Waylon Jennings finally embraced Jesus as Lord and Savior.

The story of his surrender to God’s supremacy is a story of patience that comes as a direct result of devotional faith.

In living this story with Waylon, I learned the essential lesson of patience: Just when you believe that you’ve been patient enough, more patience is required. Like love, patience is infinite. You can never have enough. That’s because patience is love. Patience is love in action or, at times, inaction. That patience, however, has a divine, not a human source. Let me explain:

I was raised by a father, Arnold Johnson, who was an inventor and dreamer. My mother was a coal miner’s daughter with a passion for God. That passion led to her ministry. My childhood home was a converted army barracks that Mother turned into the First Lighthouse Evangelical Center where she taught the Word. Despite the fact that we lived in Mesa, Arizona, a predominantly Mormon city, Sister Helen D. Johnson, cultivated a robust following of non-denominational Christians. She also traveled the tent revival circuit and brought me along. My musical training, as a pianist and singer, began in service to the Lord where I watched Mother, who possessed all the gifts of the spirit, heal with her hands and her heart. When she spoke of Jesus, the Holy Ghost swept into our presence as a living, breathing force.

In spite of Mother’s sacred example, by the time I was 18, I had begun to lose my original faith. I became enamored of what I now consider pseudo-intellectual substitutes for true spirituality. I read books by proponents of self-centered and Godless philosophies. I embraced a form of agnosticism that, to my young and impressionable mind, held an exotic allure.

This was the first moment when I understood the power of patience. Seeing that I was wandering off the true path, Mother never confronted me. Instead, she expressed patience. She had developed patience through her unwavering faith in God. She knew me well enough to know that my journey was my own. Had she castigated me, had she shamed or scolded me, it would have served no purpose and, in fact, only pushed me further me from God. Despite Mother’s unbreakable belief in the singular truth of Christ’s teachings, she recognized my inability to re-embrace those truths at this juncture in my life. Avoiding all theological discussions, she continued to offer me abundant and unconditional love.

On October 26, 1969, I married Waylon Jennings. I was twenty-six, and this was my second marriage. My first, to musician Duane Eddy, had ended amicably but decisively. Waylon was the great love of my life, far and away the most exciting and charismatic man I have ever met. My union with Waylon came at roughly the same time I found myself returning to the Lord. My experiments with foreign philosophies had given me neither comfort nor strength. New Age formulations failed to work any magic in my mind.

I saw that Jesus and Jesus alone was the lover my soul.

I had gone away, but God hadn’t. In short, my mother’s patience paid off. Like the prodigal son, I returned to the fold where Mother greeted me with open arms.

In Nashville, I attended Don Finto’s wonderful Church of Christ where the beginning of the Jesus Movement heralded the radical inclusiveness of God. Don preached against pharisaical doctrines that elevated legalism over love. For over two decades, the Greater Apostolic church, comprised mainly of African Americans, became my spiritual home. Passion washed over every inch of that sanctuary. The praise and worship was direct, vivid and gloriously musical. God was back in my life to stay.

But what about Waylon’s life? When you the love the Lord deeply, your natural inclination is to share your love with your spouse. I desperately wanted to do that, and I tried. The trouble was that Waylon’s background was dramatically different than mind. He had been brought up in a small west Texas town where he had experienced church as an oppression rather than a blessing. In his own words, he described his early religious training:

“I understood God as someone who said, `I created you but you’re never gonna see or hear Me. I’m going to give you a book that’s not easy to read and hard to understand. It’s a sin to question it, and if you don’t follow it to the letter, I’ll throw you in a lake of fire where you’ll burn forever and, even though I’ll hear you screaming, I won’t do a thing.’”

Best as I could, I tried to show Waylon how my upbringing stressed exactly the opposite qualities of divine nature. God is simply and totally love. The Bible, for all its complexity, makes plain moral sense; its stories of human triumph and tragedy are replete with wisdom. But Waylon was a stubborn man, a rugged individualist, and a Texan to boot. He certainly saw how, in re-embracing Christ, I felt whole. He saw the light in my eyes and he felt the love in my heart. At the same time, the power of his early story kept him out of church and closed his mind to my entreaties.

I could have — I should have — followed the example of my mother. This was a moment when patience was required. But my enthusiasm overwhelmed my wisdom. I did more than simply request that, spiritually speaking, Waylon bend my way. I became insistent. I badgered and nagged. Big mistake. It was ego, not love, that drove me. I had to be right. I couldn’t see that impatience was blinding me to reality. Reality said that Waylon wasn’t ready. Reality said wait. Reality said that timing is everything. Reality said if you want to save your marriage, back off.

Reality was right. I did back off. I realized that my faith and faith alone with enough. I leaned on my faith, and faith gave me the gift of patience.

Decades passed. Then, during the Thanksgiving holiday of 2001, I took Waylon to the hospital. In ways both big and small I had spent a lifetime affirming to him the certainty of my faith. For years, though, I had avoided direct confrontation. But now the Holy Spirit told me it was time.

I said, “It all comes down to one thing, Waylon. Are you ready to be God’s man?”

He smiled and asked, “To become God’s man, what are the words I need to say?”

“That you accept Him, that you love Him as He loves you, that you turn your life over to Him.”

Waylon said those words. And when he did, I thought of those two words expressed so exquisitely in John 11:35.

On February 13, 2002, Waylon made his transition and peacefully passed into the other side of time. He was saved. Patience, born of faith, had saved him. God had saved him. I realized something Mother had exemplified her entire life:

Faith honors God, and the gift of that faith is calm and serene patience.

Who are you patiently praying for to finally come to Jesus? Don’t quit praying! I have one particular person I love who walked away from God several years ago and I’m praying every day for the Lord to chase that person down. And, when that day comes, I will weep. What about you? Come share with us on our blog. We want to hear from you! ~ Laurie McClure, Faith.Full