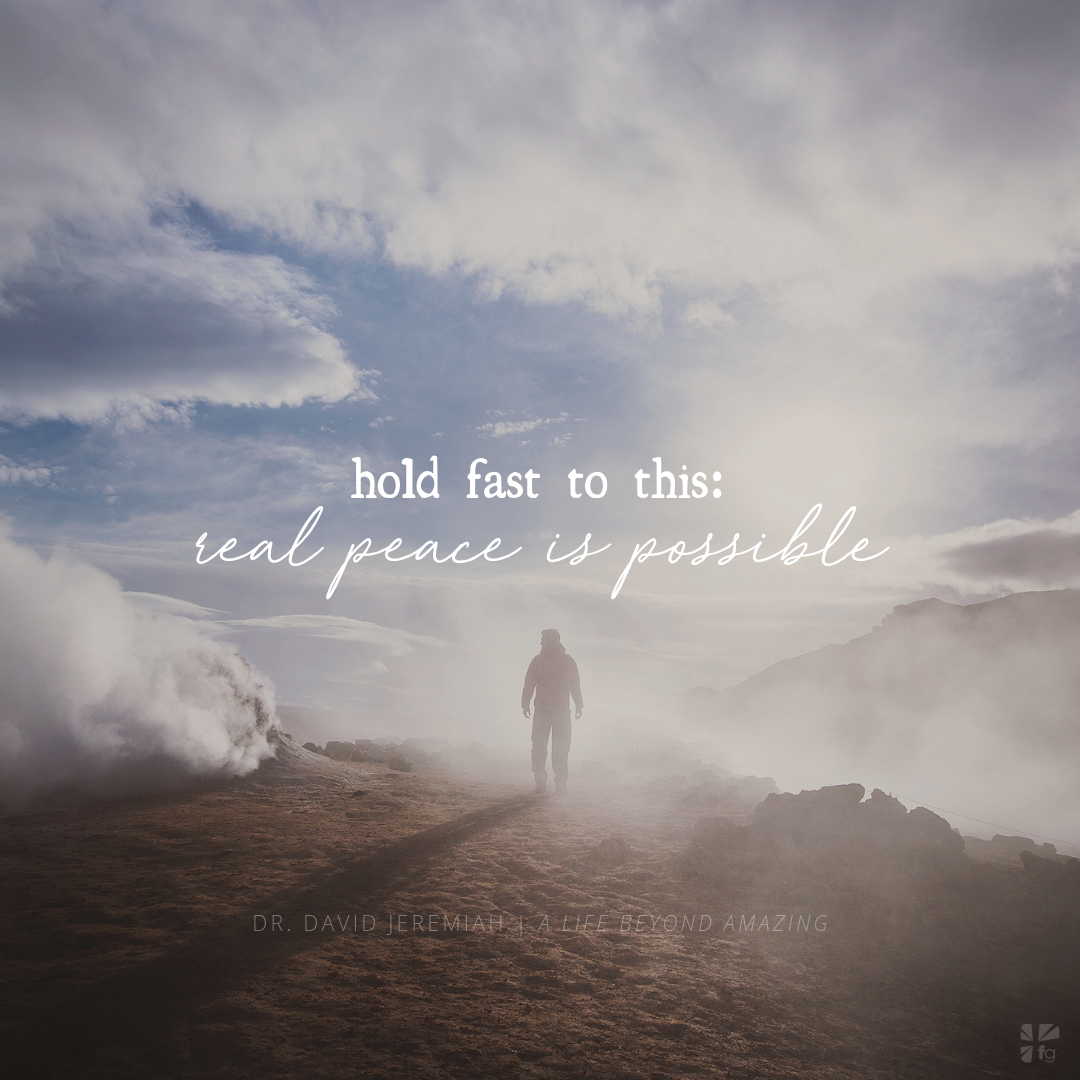 God’s ultimate goal for humanity is for peace to blanket the earth. His Son, Jesus Christ, was called the “Prince of Peace” by Isaiah the prophet (Isaiah 9:6). That’s because Isaiah saw another day on the prophetic horizon. He described that day as a time when nations would

beat their swords into plowshares, and their spears into pruning hooks; nation shall not lift up sword against nation, neither shall they learn war anymore. — Isaiah 2:4

So universal is the longing for peace that this verse, Isaiah 2:4, is engraved on the Isaiah Wall in a park across the street from the United Nations building in New York City.

Our yearning for peace is expressed around the world in enormous statues and works of art. If our Statue of Liberty means anything, it means we are offering a gesture of peace to those who come to live within this country. It’s a symbol of our desire for peace in the world. Christ of the Andes, on the border between Chile and Argentina, is a gigantic figure constructed to celebrate and express the hope for peace. In Paris, there’s the Wall for Peace at the foot of the Eiffel Tower. This glass monument has the word peace written in forty-nine languages, and visitors are encouraged to leave messages of peace in the cracks. In Tokyo stands a robust statue with arms outstretched toward heaven, and written underneath the statue in Greek and Japanese is the word agape… a testimony to the desire of the Japanese people for peace between their country and others.

Many years ago a man from the Dominican Republic was so concerned and burdened about world peace that he offered himself to be nailed to a cross as a sacrifice for world peace. As thousands watched on television, six-inch stainless steel spikes were driven into his hands and feet. He had planned to remain on the cross for forty-eight hours, but after only twenty hours he had to cut short his voluntary crucifixion because of an infection that developed in his right foot. The newspaper headline the next day read as follows: “Crucifixion for Peace Falls Short.”1

That headline could summarize just about everything that’s been done in our world to find true peace. It all has fallen short of its goal. Someone observed that Washington, DC, has a large assortment of peace monuments; we build one after each war.

I may be realistic about the world’s efforts to achieve peace, but I am not cynical. Working for peace is a noble effort, perhaps the noblest. Jesus said peacemakers “shall be called sons of God” (Matthew 5:9). And the apostle Paul said,

If it is possible, as much as depends on you, live peaceably with all men. — Romans 12:18

Yet as much as everyone claims to want peace in the world, it’s been an elusive goal throughout human history. And now we see the world becoming an even more dangerous place.

In the midst of all that worries us, how do we find the peace of God? We make it our mission, and we do the work to receive it.

Think about what you do when you have to be somewhere but you can’t find your car keys. You frantically search for them. And while you’re searching, you’re worrying about where you’re supposed to be and who’s waiting for you and what you’ll miss. You’re distracted, upset, and you have no memory of where you left those keys!

But as soon as you find them, the memory of putting them there comes back to you — because it was there all along. You just let other thoughts crowd it out.

God’s peace is one of the keys to a life beyond amazing, and finding it is a serious endeavor.

Let the desire to know that peace fill your heart and be your focus. Search the likely places and do the likely things with calmness and faith. Don’t let the pressure and uncertainty of the world distract you.

Peace is the reason God sent His only Son to earth. He is in truth the Prince of Peace, and His peace is

the peace of God, which surpasses all understanding. — Philippians 4:7

When He appeared for the first time on this earth in a manger in Bethlehem, the angels announced His arrival with these words:

Glory to God in the highest, and on earth peace, goodwill toward men! — Luke 2:14

I encourage you to cultivate God’s peace in your life. And I can tell you how. First, understand what God’s peace means for you. Then, ask for it and desire it with all your heart. Finally, do the things that open your heart to accept it when it arrives.

The world into which Jesus was born had a very different understanding of the concept of peace than we have today. Our English  word peace originates from an Old French word meaning “reconciliation, silence, agreement, the absence of hostility.”

But the Hebrew word shalom has a much richer meaning. This word is found more than two hundred times in the Old Testament. Its basic meaning is “to be whole, or safe, or sound.” Shalom designates a condition in which life can best be lived. It is the concept of integrity; body, soul, and spirit are in alignment. In shalom, you have more than the absence of hostility. You have a quality of life that nurtures peace.

Shalom is “the condition of everything being set right. It’s about fulfillment, completion, maturity, soundness, wholeness, harmony, tranquility, security, well-being, welfare, friendship, agreement, success, prosperity. It’s about the total well-being of the person and the community. It’s one of the deepest longings of the human heart.”2

Shalom means all is well in my life; everything is integrated in my life.

When Jesus came, He brought that certainty to us. He is the only way to have that peace in your life.

Commenting on this peace with God, Ray Stedman wrote with excitement, “Our hearts are at peace!… Calmness, courage! To use a modern term, and, I think the most accurate, we have good ‘morale.’ Our morale is high. We are ready for anything. No ground can be too rough for Christ — and we have Christ. Therefore we have good morale.”3

About twenty-two years ago I was diagnosed with lymphoma, a type of cancer that, at the time, had a very poor survival rate. Shortly after my diagnosis I went to the Mayo Clinic and was operated on immediately. To determine the extent of the cancer, they basically cut me stem to stern.

After my surgery I was taken to another floor to recover. On this floor the patient rooms were in a circle, with the nurses’ station and desks for staff in the middle. As soon as it was possible, the doctors wanted me up and moving around. Of course, that was the last thing I felt like doing. But knowing this was an important part of my recovery, I pushed myself to do a full lap around the nurses’ station, starting at my room and passing every other patient’s room until I reached my own room again. My goal that first day was one lap, and I was barely able to finish it.

The next day I decided to push myself to do two laps. My plan was to do one more lap each day than I’d done the day before. So I set out, walking slowly around the circle.

By a strange coincidence, the doctor who had performed my surgery was dictating his notes about me when I shuffled by his desk. All I remember hearing him say was, “A pastor who has stage four large cell lymphoma cancer.”

Stage 4. I was stunned. Until that moment I hadn’t known how serious my condition was. Somehow I completed those two laps and got back to my room. I can remember sitting there, feeling scared and overwhelmed. But then, that feeling completely left me and was replaced by another.

I’m not in control of my life, I told myself. But the Spirit of God is.

A sense of what I can only describe as “good morale” came over me. I would let God do His work, and I would do mine. After that, my only thought was, Well, I’ll have to do three laps tomorrow.

For twenty-two years I didn’t share that story with anyone, not even my wife. But as I was writing this chapter, it came powerfully to mind. This resiliently good morale is the peace God gives us when we turn our lives over to Him. In the face of a terrible diagnosis, the Lord’s peace was resilient, and I persevered with good morale.

Over the next few months I underwent two rounds of chemotherapy and a stem cell transplant, at the end of which I was in remission. Today I remain cancer-free.

If things are bad on the outside but the Holy Spirit is in charge on the inside, He will give you peace when you surrender your life to Jesus, our Prince of Peace, and express the yearning for His peace in your heart, just as nations express it in monuments. And if you feel discouraged, hold fast to this: real peace is possible. Of that the Bible assures us.

Excerpted with permission from A Life Beyond Amazing by Dr. David Jeremiah, copyright David P. Jeremiah.

Watch: A Life Beyond Amazing

Do you live with God’s peace no matter what your circumstances? Have you put yourself under His control? What do you think would change if you did? Come share your thoughts with us on our blog. We want to hear from you!