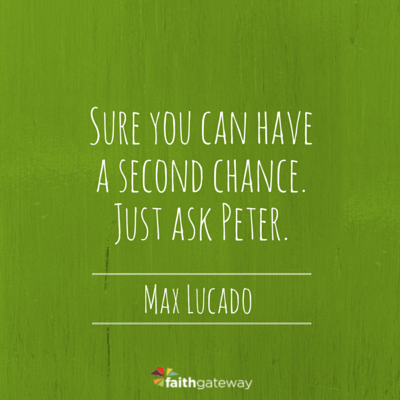 It was like discovering the prize in a box of Cracker Jacks or spotting a little pearl in a box of buttons or stumbling across a ten-dollar bill in a drawer full of envelopes. It was small enough to overlook. Only two words. I know I’d read that passage a hundred times. But I’d never seen it. Maybe I’d passed over it in the excitement of the resurrection. Or, since Mark’s account of the resurrection is by far the briefest of the four, maybe I’d just not paid too much attention. Or, maybe since it’s in the last chapter of the Gospel, my weary eyes had always read too quickly to note this little phrase.

But I won’t miss it again. It’s highlighted in yellow and underlined in red. You might want to do the same. Look in Mark, chapter 16. Read the first five verses about the women’s surprise when they find the stone moved to the side. Then feast on that beautiful phrase spoken by the angel, “He is not here, He is risen,” but don’t pause for too long. Go a bit further. Get your pencil ready and enjoy this jewel in the seventh verse (here it comes). The verse reads like this:

But go, tell His disciples and Peter that He is going before you to Galilee. [tweet this]

Did you see it? Read it again. (This time I italicized the words.) “But go, tell His disciples and Peter that He is going before you to Galilee.

Now tell me if that’s not a hidden treasure.

If I might paraphrase the words, “Don’t stay here, go tell the disciples,” a pause, then a smile, “and especially tell Peter, that He is going before you to Galilee.”

No wonder they call it the gospel of the second chance.

Not many second chances exist in the world today. Just ask the kid who didn’t make the Little League team or the fellow who got the pink slip or the mother of three who got dumped for a “pretty little thing.” Not many second chances. Nowadays it’s more like, “It’s now or never.” “Around here we don’t tolerate incompetence.” “Gotta get tough to get along.” “Not much room at the top.” “Three strikes and you’re out.” “It’s a dog-eat-dog world!”

Jesus has a simple answer to our masochistic mania. “It’s a dog-eat-dog world?” He would say. “Then don’t live with the dogs.” That makes sense, doesn’t it? Why let a bunch of other failures tell you how much of a failure you are?

Sure you can have a second chance. Just ask Peter. [tweet this]

1. Life can seem like a minefield. One wrong move, one bad decision, one momentary lapse of judgment can explode in our faces and change everything. What was one such incident that left you feeling like a failure?

2. Have you received a second chance — a shot at redemption and an opportunity to learn from your failure? How did it come about?

The apostle Peter had no way of knowing how meaningful his story would become to generations of believers. His story serves both as a cautionary tale and as an inspiration to all of us who have our less-than-perfect moments. Peter demonstrated just how far someone could fall — and still get back up again.

Prayer for the Week

Father, thank You for refusing to allow us to be defined by our failures. Thank You for the wisdom, experience, and perseverance found only at our lowest points. Open our eyes to the second chances You offer. Give us the courage and humility to pick ourselves up and start again after we fall. In Jesus’ name, amen.

Excerpted with permission from Ten Men of the Bible by Max Lucado, copyright Thomas Nelson.

There’s a good reason why Peter is the favorite apostle (“stained glass guy”) for so many people for the last 2,000 years. He failed the Lord Jesus miserably, right when it mattered. He flopped. He’s the disciple who represents all of us failures. Thank You, Jesus, for loving Peter, and the rest of us who so desperately need second, and third, and fourth, and fifth chances! Come join the conversation on our blog! We want to hear from you about the mercy of our God who gives second chances! ~ Devotionals Daily