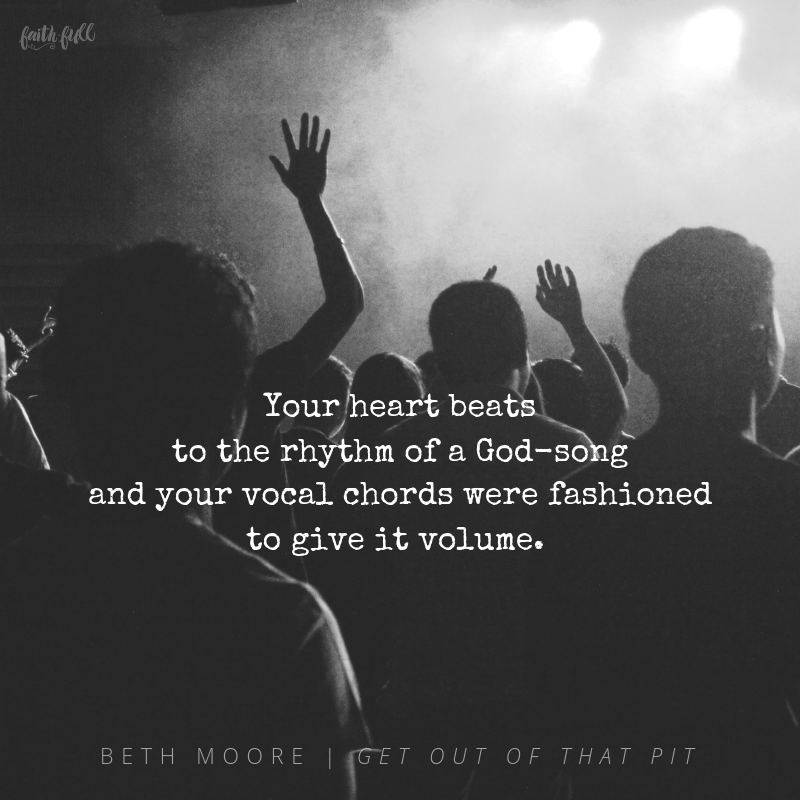 You will have a new song in your mouth, a hymn of praise to your God. That’s the second way you’ll know you’ve waved goodbye to the pit. Right after the psalmist tells us that God sets us on the rock and gives us a firm place to stand, he tells us God gives us a new song:

It doesn’t matter whether you have a beautiful voice or make mostly noise, you were born for song. And not just any kind of song. Your heart beats to the rhythm of a God-song, and your vocal chords were fashioned to give it volume. That’s not to say other kinds of songs aren’t wonderful and even medicinal to the soul at times, since music — not to be confused with lyric — is a gift from God to man. Most of the time I’m a praise-and-worship/Christian-contemporary-music girl, but every now and then I feel blessed and freed to throw something else into the mix. I was raised in Arkansas in a time of fifty/fifty integration where the black kids won us white kids over hands down with their music. Is it any wonder? Those were the days of The Temptations when “Papa was a rollin’ stone and wherever he laid his hat was his home.” I never recovered, which might explain why CeCe Winans is the reigning queen of my iPod.

If the weather is just right, Keith and I occasionally jump in my car, open the sunroof, throw our Motown’s greatest hits in the CD player, hit the road, and sing like there’s no tomorrow. I’ve thought a lot about something he said to me a few months ago while we drove around belting it with that CD.

“Ain’t Too Proud to Beg” was blaring from the speakers. Soul sound doesn’t get better than that. I was dancing around as much as my seatbelt would let me, snapping my fingers, swaying back and forth. “Man, I love this song!” I exclaimed. Keith responded with equal enthusiasm, “I love how you act when you hear it!” I realized that even a man married to a Bible teacher likes for his wife to have a little sass. Maybe especially a man married to a Bible teacher. I promised myself I’d remember that.

It’s true. Music of all kinds can get to you. Even intoxicate you when you’re not one iota the drinking kind. I found that out for myself a year or so ago. I was invited to speak at a gathering in Washington, D.C., and, since my firstborn had never been there, I grabbed her and took her along. We were invited to go to the symphony at the prestigious Kennedy Center with once-in-a-lifetime seats in a bird’s-eye box. We put on our fanciest duds and mingled with some of Washington’s finest as we made our way through the wide corridors to our coveted seats. I was so excited I could hardly hold myself together. The musicians were all tuning and practicing their own instruments, oblivious to the ones beside them as that marvelously untamed and indistinguishable sound filled the house. It was thrilling. The whole affair was just like something you’d see in the movies. Something Audrey Hepburn would have attended, dressed just so.

I wish I could tell you that I am an experienced patron of the arts but, truthfully, I’m not even an experienced patron of arts and crafts. I love music, books, movies, and theaters, but at my own unsophisticated level. That night Ellie May Clampett had gone to the symphony, and she was sitting in my seat and wearing my hair. I was just sorry Jethro hadn’t come wearing Keith’s duds.

Just before the clock struck the hour, the audience began to cheer, and many of them stood to their feet. I searched the stage for the conductor, but he was nowhere to be found.

Noting my obvious confusion, our experienced friend who had accompanied us explained, “The first-chair violinist is making her entrance.”

Then I saw her. She was a vision. Her hair was pulled back in a bun. Her long black skirt flowed like billows of dark, mysterious clouds as she made her way across the stage. She looked just like a ballerina to me. She seemed to waltz her way to her seat as the crowd welcomed her with great fanfare. I was spellbound. Every woman in the room wanted to be her. I hardly noticed the conductor’s entrance. I couldn’t take my eyes off the exquisite violinist in the first chair.

Most of the time I didn’t know what song we were on. Nor could I appreciate the guest pianist introduced in the middle of the evening, but I knew he was special. The crowd went absolutely wild. He would play several bars (just in case you know even less about music than I do, that’s a musical term, not a place of business) then throw his head back and swing his arm behind him with tremendous drama. You might be impressed to know that I am actually a patron of the Houston Livestock Show and Rodeo, and the way the guest pianist played wildly with one hand reminded me of some bull riders I’d seen. I tried to relate as best I could.

As we neared the end of the evening, the songs heightened in a crescendo almost unbearable to the soul. Beethoven came back from the dead, kidnapped my emotions, and held me captive until I felt like crying. The last note burst like fireworks, and the conductor’s wide-stretched hands hung in the air for what seemed like minutes, as if they’d been caught on the tip of a huge treble clef.

For a few seconds nobody could breathe. Breaking the silence, the woman just in front of me stood up and began yelling at the top of her lungs, “Bravo! Bravo!” I was astounded. I mean, let’s face it. We all know what the word means, but how many of us have ever been in a place where they actually used it? In my usual settings, we more often yell something like, “Whoop! There it is!” This was my maiden voyage into Bravo-ville, and I was bug eyed. Then one by one people throughout the audience stood and cheered. “Bravo! Bravo!” Finally everyone in the great house was on their feet clapping their hands raw, and I, right there with them, screamed, “Bravo! Bravo!”

In just minutes we made our way into the hallowed halls where every face shone with artistic satisfaction. Indeed, we felt more excellent for having come. As for me, I waltzed out of the Kennedy Center in my black dress just like the ballerina making her way to the first chair. I couldn’t help myself. I was totally intoxicated. Throughout our fashionably late night dinner in D.C., I used sophisticated language befitting a ballerina who plays the violin in the first chair. I ate light. You can’t play an instrument like that with a full stomach. I acted like I knew things I don’t. I felt lofty. High.

Close to midnight Amanda and I fell in the pillowy beds of our beautiful hotel room and silently took in our evening. Suddenly something came over me. It was my old self. I looked at Amanda and in my characteristically country tone yelled, “What the heck was that?” We laughed until we cried. We rolled back and forth, kicking our legs in the air, sides splitting until we hollered with pain. Right about then, Cinderella turned back into the Ellie May, saddled her horse, and headed back to Texas.

As good as the symphony was, a God-song in the simplest man’s soul is more than that. It’s not just a moment. It’s not just an emotional intoxication. It’s the unleashed anthem of a freed soul. A song expresses something no amount of spoken words can articulate. No amount of nonverbal affection can demonstrate. Music is its own thing, especially when instruments and voices respond to the tap of the divine Conductor.

Nothing can take a song’s place. If its outlet gets clogged, the soul gets heavier and heavier.

And nothing on earth clogs the windpipe like the polluted air of a pit.

Few of us think of ourselves as troupers. We see other Christians display remarkable character as they endure difficult times, but I’m not sure we ever see it in ourselves even when it’s there. Think about how often you’ve tried to affirm someone for his strength in a certain tribulation, and he wouldn’t take the compliment. He knows the fear he faces in the night, just like we do. He is painfully well acquainted with his own weakness when no one’s looking, just like we are. I don’t believe many people think themselves strong. We can hear countless sermons on joy through tribulation, but we’re not sure we’ve ever had the spiritual fortitude to do anything but whine through ours.

But did we often have a song on our hearts? Or one ready on our lips? I’m not talking about the unbroken melody of a beautiful singing voice. I’m talking about an unstopped outlet of frequent compulsory praise. Of a raptured spirit. Of a Sabbathed soul. In the midst of our difficulty, could we still sing with liberty to our God? Even with tears streaming down our cheeks?

Beloved, a song of praise freely sung and spontaneously offered is one of the most blatant trademarks of joy in tribulation.

You have not let that situation get to you entirely and bury you in a pit until you’ve lost your God-song. Likewise, you know you’re out of that pit when not only have your old songs returned but something fresh has happened. God has put a new song in your mouth. A brand-new hymn of praise to your God.

Having a new song in our mouths doesn’t mean we’re completely out of the pain that caused our pit or the pain that our pit caused. It doesn’t even mean, if ours was a pit of sin, that all the consequences are necessarily behind us. It just means we’re no longer stuck. No longer defeated. No longer caked in mud. Our vision is returning. Hints of creativity are reemerging.

It’s a new day, God doesn’t hate us after all, and we can’t help but praise. The wind is blowing in our faces once again and once more hope springs eternal.

Excerpted with permission from Get Out of That Pit by Beth Moore, copyright Beth Moore.

Have you ever experienced with utter surprise that God put a new song in your mouth, especially during or after a season of pit-dwelling? Are you in that pit now and disbelieving or maybe eager for a new song now? Come share with us on our blog! We would love to hear from you! ~ Laurie McClure, Faith.Full