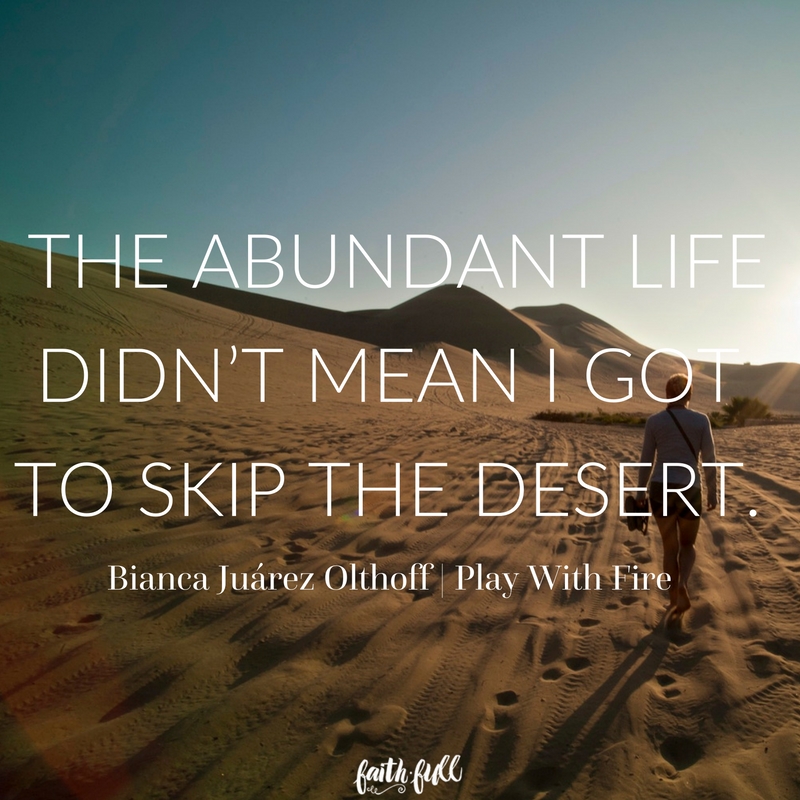 On the final day of the retreat, the prayer team called my mom to the front of the room. One of the leaders pushed her forward in her wheelchair, and the women placed their hands on her body and began to pray. In a beautiful moment of spontaneity, women from all over the auditorium got to their feet, walked to the front where my mother was seated, circled around her, and began to pray out loud. The cadence of their voices filled the room, and I watched as they cried out to God for a miracle. I don’t remember what was said, but I remember what I felt: hope.

While I didn’t feel a metamorphic shift or hear the audible voice of God, I knew my faith was awakening; something inside me wanted change. The façade was crumbling, the veneer thinning; I needed a transformation. I not only wanted to hear from God again, I wanted to believe His promises. If He could make the old new, the dead alive, and the crooked straight, I wanted to believe He could transform me into the person I was destined to be. As my mom recounted the weekend during our desert drive home, I prayed, God, work in me.

The desert sun beat down on us as my mom and I drove home from the retreat, empty land stretching around us into the distance. My mother basked in the work of the weekend and chatted about how happy she was that hundreds of women’s lives had been forever impacted. With every ounce of her being, she believed we’d progressed — in big and small ways — into a fresh understanding of who God is and of His immense love for us.

Maybe she was right. I heard, saw, and felt something going on during that gathering of women. There was a smoldering ember that ignited the collective faith, and this fresh faith spiritually awakened even the staunchest of doubters (read: me). Although we didn’t have a pillar of fire leading us through the desert like the Israelites, a fire started in my heart.

The Message renders it more plainly:

I came so that they can have real and eternal life, more and better life than they ever dreamed of.

Better than our best dreams — what a promise. And if we translate this verse from the Greek, it says Jesus came to give us abundant life.

Growing up, I didn’t have a solid model of abundant life because so many Christians around me lived so many different ways. Some good, Bible-believing Christians lived in constant crisis. Others lived lives of scarcity where everything they had was just enough to squeak by. But the saddest Christians were the ones who believed they couldn’t have joy. They had just enough God to forgive their sins, but not enough to heal them from emotional, physical, or relational pain.

But did Jesus come to give us barely enough life? No. Abundant means more than more than enough. We see the word abundant used in other passages to convey the same thing; it’s more than we can think or imagine (Ephesians 3:20). I heard this truth many times, but had I experienced it?

Driving home from the retreat with my mom, I nursed a growing understanding of abundant life. We were in the desert both physically and metaphorically. I stared at my mother’s head — once full of thick, red hair — her swollen face, and her jaundiced eyes, and I saw abundance. In her most fragile state, she believed in a God who was more than more than enough.

All weekend I had been with women who had real-life pain and real-life issues, but they gave from an internal reservoir that was more than more than enough. Cindy’s son was a drug addict. Sylvia’s husband suffered from diabetes. Donna’s mom was in the hospital. Mary’s husband had passed away. And yet these women committed, year after year, to give from a reservoir carved out by pain but filled by God.

The Holy Spirit filled what life had hollowed out.

As I was driving home with my mom, thinking about all this, I realized an abundant life is filled with meaning and contentment…

filled with design and purpose…

filled with happiness and peace…

… even in the midst of pain, illness, and want.

But the abundant life didn’t mean I got to skip the desert.

It meant I could experience abundance in the midst of the desert. I see that now, and know it will be true again. And that promise — the promise of the more-than-enough life, even in the desert — is beautiful.

Are you experiencing the Holy Spirit in your life? Are you living the abundant life that Jesus came to give us? Or do you long for more of that fulfilled life like I do? If you’re in a desert season, what is God teaching you through this fire-y difficulty? Come share with us on our blog. We want to hear from you! ~ Laurie McClure, Faith.Full