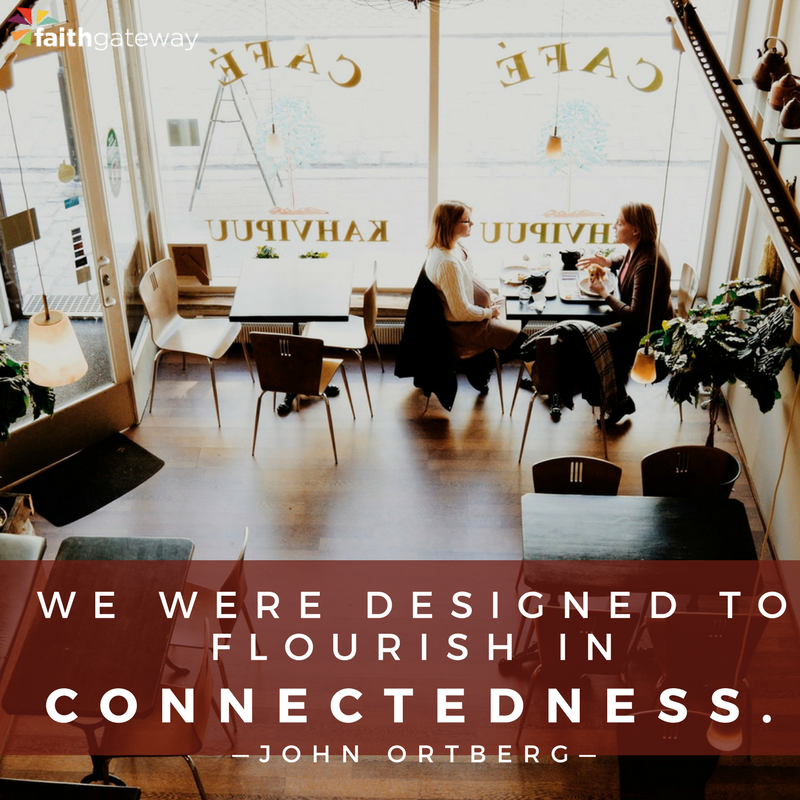 That is why what happens between you and another person is never merely human-to-human interaction — the Spirit longs to be powerfully at work in every encounter. Referring to this dynamic, some writers of Scripture speak of “the fellowship of the Spirit.” Fellowship has become a churchy word that suggests basements and red punch and awkward conversation. But it is really a word for the flow of rivers of living water between one person and another, and we cannot live without it.

An academic journal called The Journal of Happiness Studies publishes studies using the tools of research to identify what makes human life flourish. When researchers look at what distinguishes quite happy people from less happy people, one factor consistently separates those two groups. It is not how much money you have; it is not your health, security, attractiveness, IQ, or career success. What distinguishes consistently happier people from less happy people is the presence of rich, deep, joy-producing, life-changing, meaningful relationships.

Spending meaningful time with people who care about us is indispensable to human flourishing. Social researcher Robert Putnam writes, “The single most common finding from a half-century’s research on life satisfaction, not only from the U.S. but around the world, is that happiness is best predicted by the breadth and depth of one’s social connections.”

Part of what it means to be made in God’s image is our capacity for connectedness, because God created human beings and then said, “It isn’t good for man to be alone.” Paul paints a picture of that connectedness in writing to the church in Ephesus that they are “being rooted and established in love.”

When a tree puts roots into the ground, those roots are able to take in nutrients and water, and the tree grows and has life and strength — but only if it is rooted. In the same way, we are rooted and our souls are nourished in the love of God and other people. We experience this both physically and emotionally when we connect with somebody.

You are walking down the street, and someone you know smiles at you. They care about you through words, through touch, through listening, through prayer together. Whenever there is an exchange of genuine caring, it is as if the roots of your soul are getting fed. Every life has to have that connectedness.

How necessary is it? British scientist Donald Winnicott found that children who play in close proximity with their mother are more creative than children playing at a distance from her. Winnicott found that children are naturally inventive, curious, and more likely to take risks in what might be called the “circle of connectedness.” When they are within this circle, they take more risks. They show more energy. If they fall down, they are more likely to get back up. They laugh more than children who are outside the circle.

Why? It is not that Mom is doing for the child what the child could do for himself. She is not solving problems for this little kid or generating ideas about how he ought to play. Instead, when love is present, when that child feels safe and cared for in her presence, something gets released in his life. He gets a little stronger. He gets bolder and more creative. Love releases life in that child that would otherwise remain dormant and unsummoned.

Connectedness is not the same thing as knowing many people. People may have many contacts in many networks, but they may not have any friends.

When you are loved, it is not just that you receive more from someone else, but also that you become more yourself. You-ier.

Love brings the power to become the me I want to be.

Loving people are literally life-givers. That is connectedness.

How about when they are fifteen — how far away do they want to be then? The circle is now the size of the solar system. They want to be tracing the orbit of Haley’s Comet.

When love is working correctly, this sense of connectedness becomes internal. Initially, it is a very physical connection. When life begins, there is actually physical attachment. As we get older, we carry it around inside of us, and eventually we can take it with us wherever we go.

Physically, the destructive aspects of isolation are powerful. Even animals that are isolated experience more extensive arterial sclerosis than animals that are not isolated. A friend of mine used to have a dog and a cat, and the dog and the cat fought for ten years. Then one year the cat died, and the dog didn’t want to eat. Day after day the dog wouldn’t eat, until six weeks later the dog died. That is the power of connection.

People who are socially disconnected are between two and five times more likely to die from any cause than those who have close ties to family, friends, and other relationships. People who have bad health habits like cigarette smoking, overeating, elevated blood pressure, and physical inactivity — but who still remain connected — live longer than people who have great health habits but are disconnected.

We see the physical, life-giving power of connection in Winston Churchill. He had a wonderful marriage with his wife, was deeply connected to his family, his friends, his nation, and his work. His health habits were terrible. His diet was awful. He smoked cigars all the time. He drank too much, had weird sleep habits, was completely sedentary — yet he lived to be nearly ninety. Somebody asked him, “Mr. Churchill, do you ever exercise?” He replied, “The only exercise I get is serving as a pallbearer for my friends who died while they were exercising.”

Anyone who does not love remains in death.

We were designed to flourish in connectedness.

If you’re not connected to a group of loving, life-giving, encouraging, fun Christians, go and find some and get connected! Relationships take intentionality and we are meant to live in community as the Body of Christ. Who are your friends and loved ones who make your life flourish? Come share with us. We want to hear from you! ~ Devotionals Daily