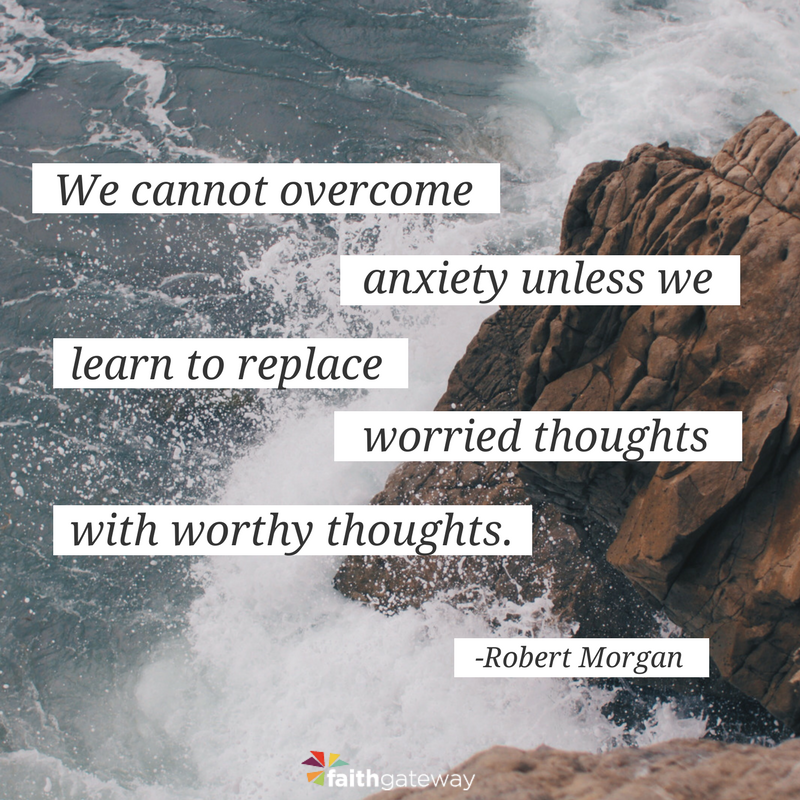 The Practice of Thinking

I was on a flight to Toronto beside a woman whose nose was in a book. I hunkered down in the window seat with my Bible and notepad and studied through the flight. We didn’t chat until time to land, at which point she looked over and commented about my studying the Bible. I told her I enjoyed studying the Bible very much. She told me she was the national director of human resources for a large automotive company, and that she had read her Bible in younger years. On one occasion, she said, she had been asked to give a recitation. She had several choices of material, but she had chosen a passage from the Bible, and it had meant a great deal to her at the time.

“Was it this passage?” I asked, and then I quoted Philippians 4:4-9 to her, word for word.

To my surprise, she grew visibly flustered and emotional.

She broke into tears and started fanning herself with her hands, saying, “I don’t know what’s happening to me. I’m not usually like this at all.”

She hauled up her purse — it was the size of a small Saint Bernard — and began searching for a tissue, which was nowhere to be found. The tears ran down her cheeks and she mopped them up with her palms. I offered my handkerchief.

“I’ve been so busy and so stressed,” she explained, wiping her eyes, “that I’ve been short with people recently and I’ve been demanding and difficult and worried. And here you are, quoting something to me I learned long ago and had forgotten. I guess I needed to remember those words again.”

By the time she composed herself, we were herded off the plane like cattle, all of us late for connecting flights. I didn’t even get the woman’s name. But what a blessing to share Philippians 4 with her and to see the effect these simple words had on her thoughts and feelings. She badly needed to refocus her mind on truths she had learned long ago, but which had vanished from her memory like a dissipating mist.

When our minds are overtaken with worry, distress, or discouragement, there’s only one thing to do. We have to remember.

Out of the thirty-two words in that sentence, only one is an action verb, and it’s the key word of the verse and the sole imperative — think.

In terms of his natural personality, I believe the apostle Paul was, to some degree, a bundle of nervous energy, absorbed in his work, and subject to passionate concern.

His anxiety in Troas had short-circuited his ministry there, though God had opened great doors in that city. But Paul was a devoted student of the Hebrew Scriptures, and it’s clear he searched the books and parchments of the Old Testament for a greater acquisition of the peace of God. Perhaps in his studies he came across these words:

Be careful how you think; your life is shaped by your thoughts. — Proverbs 4:23 GNT

You will keep him in perfect peace, Whose mind is stayed on You, Because he trusts in You. — Isaiah 26:3 NKJV

Search me, God, and know my heart; test me and know my anxious thoughts. See if there is any offensive way in me, and lead me in the way everlasting. — Psalm 139:23-24

If we have anxious thoughts we’ll be anxious people, because what we think is the most important thing about us.

We are what we think, and our lives, attitudes, feelings, reactions, results, failures, successes, and personalities are formed by the strands of thought that tie our brain cells together like baling wire. This is so self-evident it’s been at the heart of philosophy and religion from the beginning of human civilization.

Even non-Christians know this. The Hindus taught, “Man becomes that of which he thinks.” The Buddha said, “The mind is everything: what you think you become.” Marcus Aurelius said, “Your life is what your thoughts make it.” Descartes wrote: “I think, therefore I am.” The nineteenth-century Unitarian preacher William Channing wrote: “All that a man does outwardly is but the expression and completion of his inward thought.”1

Ralph Waldo Emerson summed it up nicely, saying, “A man is what he thinks about all day long.”2

William James laid the foundation for today’s motivational movement and positive-thinking literature with these simple words: “The greatest discovery of my generation is that human beings can alter their lives by altering their attitudes of mind.”3

A man is literally what he thinks, his character being the complete sum of all his thoughts. . . . Good thoughts bear good fruit, bad thoughts bad fruit. . . . Let a man radically alter his thoughts, and he will be astonished at the rapid transformation it will effect in the material conditions of his life. Men imagine that thought can be kept secret, but it cannot; it rapidly crystallizes into habit, and habit solidifies into circumstances.4

Allen added, “As the physically weak man can make himself strong by careful and patient training, so the man of weak thoughts can make them strong by exercising himself in right thinking.”5

That’s Paul’s point in Philippians 4:8. Many of the men I’ve just quoted weren’t committed to biblical truth, but by sheer deduction they discovered a biblical truth so self-evident it can’t be ignored. As Proverbs 23:7 puts it,

For as he thinketh in his heart, so is he. — KJV

This is an inescapable biblical fact, and Philippians 4:8 is one of the Bible’s greatest declarations about the power of our thoughts in molding our personalities and moving us into realms of God’s peace.

We cannot overcome anxiety unless we learn to replace worried thoughts with worthy thoughts, thoughts that come directly from the mind of the God of peace. That requires thinking on things that are true, noble, lovely, and praiseworthy.

Thinking is an activity that’s fallen on hard times. We’re too busy to think, and our minds are congested with noise. It’s hard to meditate with our phones clamoring like calliopes, incoming messages arriving like missiles, and headsets blaring like the Tower of Babel.

We don’t ride horses into town now. Our work isn’t undertaken in quiet fields, disturbed by nothing beyond the murmur of the wind or the distant baying of a dog. We no longer read by the flicker of candlelight or the glow of a fireplace. All that was lost long ago in the Industrial Revolution; now the Information and Technology Revolutions instantly deliver the cacophony of the world straight into our eardrums via a billion speakers and earphones. We rush through traffic like salmon bolting upstream for spawning. We’re bombarded by noise and besieged by stimuli. Surround sound is a way of life, and lost to us — without true spiritual effort — is the spirit of Isaiah 30:15:

In quietness and confidence shall be your strength. — NKJV

Be still, and know that I am God.

When we learn to take time for thinking, and when we learn to think in the right way, the benefits come over us like a metamorphosis. This once happened to E. Stanley Jones. Though he had gone to India as a missionary with visionary passion, his energy had evaporated amid unbearable heat, hostility, and anxiety. He collapsed, and even prolonged rest failed to restore him. His nerves were shot. He resembled the apostle Paul at Troas.

One night in the city of Lucknow, while praying, Stanley Jones suddenly felt the Lord speaking to him. Though not audible, the Lord’s voice almost seemed so. Jones sensed these words: Are you yourself ready for this work to which I have called you?

“No, Lord, I am done for,” Jones replied. “I have reached the end of my resources.”

The Lord seemed to reply, If you will turn that over to Me and not worry about it, I will take care of it.

“Lord,” Jones said, “I close the bargain right here.” At that moment a great peace settled into his heart and pervaded his whole being:

I knew it was done! Life — Abundant Life — had taken possession of me. I was so lifted up that I scarcely touched the road as I quietly walked home that night. Every inch was holy ground. For days after that I hardly knew I had a body. I went through the days, working far into the night, and came down to bedtime wondering why in the world I should ever go to bed at all, for there was not the slightest trace of tiredness of any kind. I seemed possessed by life and peace and rest — by Christ Himself.6

Jones labored on for decades, serving more than forty years in India, preaching around the world — sometimes three times a day, writing a dozen books, and becoming one of the most famous missionaries of his generation. From his evening encounter with the Lord at Lucknow until his death in January 1973, E. Stanley Jones lived in the glow of the sufficiency of Christ Himself, never forgetting the Lord’s promise, “If you turn that over to Me and not worry about it, I will take care of it.”7

If you’ll listen quietly and in the stillness of His presence, the Lord is whispering the same words to you. And He tells you to think about such things.

What do you think about? What fills your mind? What about in the middle of the night? Is it time to change what you think about to worry less and live more? Come share with us on our blog. We want to hear from you! ~ Devotionals Daily