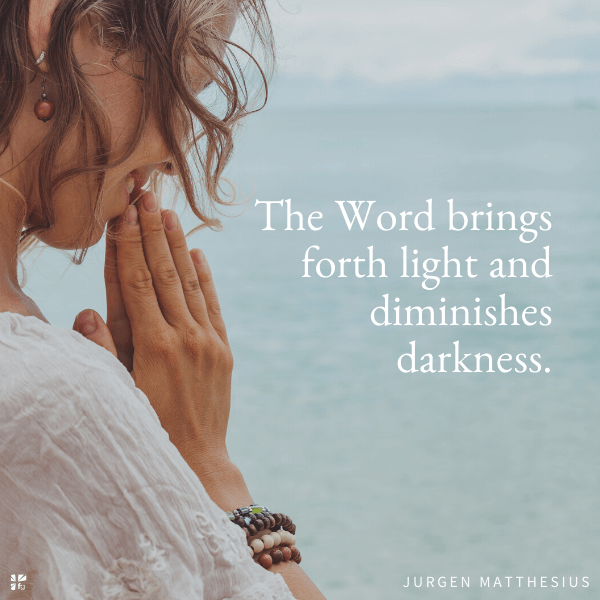 Where the word of a king is, there is power; and who may say to him, “What are you doing?” — Ecclesiastes 8:4

In the 2010 Oscar-winning film The King’s Speech, actor Colin Firth plays the part of King George VI, whose ascension to the throne of Great Britain would be accompanied by his severe speech impediment. King George knows that to rule effectively and be taken seriously, he must have command over his diction. He hires a speech therapist played by Geoffrey Rush, who gives the king the confidence to enunciate words that he formerly struggled with, helping him to recover both his cadence and his self-assurance. It is an incredibly moving film, one that highlights the importance and power of the spoken word.

God, who is the King of kings, creates everything by the Word of His mouth. In fact, His Word is supreme in the universe. Nothing and no one can undo what He has spoken and what He has declared. In Genesis chapter one, God creates the heavens and the earth, light and life, by nothing more than speaking. His Word is the beginning and the end of all things.

PUSH prayer is prayer that is based upon the Word of God. If you can see God’s Word as seed, you will see that within this seed is the will of God. Every seed reproduces after its own kind. It cannot do otherwise. An orange seed cannot produce bananas and an apple seed cannot produce watermelons. This is because within each seed is its DNA.

Each word of God contains the DNA of God within it and it is sent forth for no other reason than to establish or bring about His will. [tweet this]

So shall My word be that goes forth from My mouth; It shall not return to Me void, but it shall accomplish what I please, and it shall prosper in the thing for which I sent it. — Isaiah 55:11

The Word of God is so powerful that the Bible says in Matthew 13 that when the Word of God is sown and the recipient does not understand it, the devil comes immediately and snatches away what was sown (Matthew 13:19). The devil is terrified of the Word of God because he has no power over it. However, he has the power to snatch it away and he attacks it, resisting it relentlessly. When we speak God’s Word we are engaging in spiritual warfare. The devil hates the Word because it brings forth light and diminishes darkness.

Prayer is most potent when we speak and declare the Word of God. [tweet this]

It acts like a battering ram, pushing back the siege walls of the kingdom of darkness. It releases into the atmosphere that which overcomes darkness, bringing forth light. Jesus spoke into a tomb and a dead man walked out. In the middle of a tempest, Jesus stood on the bow of the ship and said “Peace, be still!” and immediately the storm subsided and the sea became as calm and smooth as glass (Mark 4:39). PUSH is prayer that is based upon the Word of God, fueled by the Word of God, carrying the goal of accomplishing the Word of God.

Excerpted with permission from PUSH: Pray Until Something Happens by Jurgen Matthesius, copyright Thomas Nelson.

God’s Word is the beginning and the end of all things. What would happen if we started praying the Word of God over our families, community, nation, and world issues? What if we faced spiritual battle with His Word confidently? What could happen? Come join the conversation on our blog. We would love to hear from you about praying until something happens! ~ Devotionals Daily