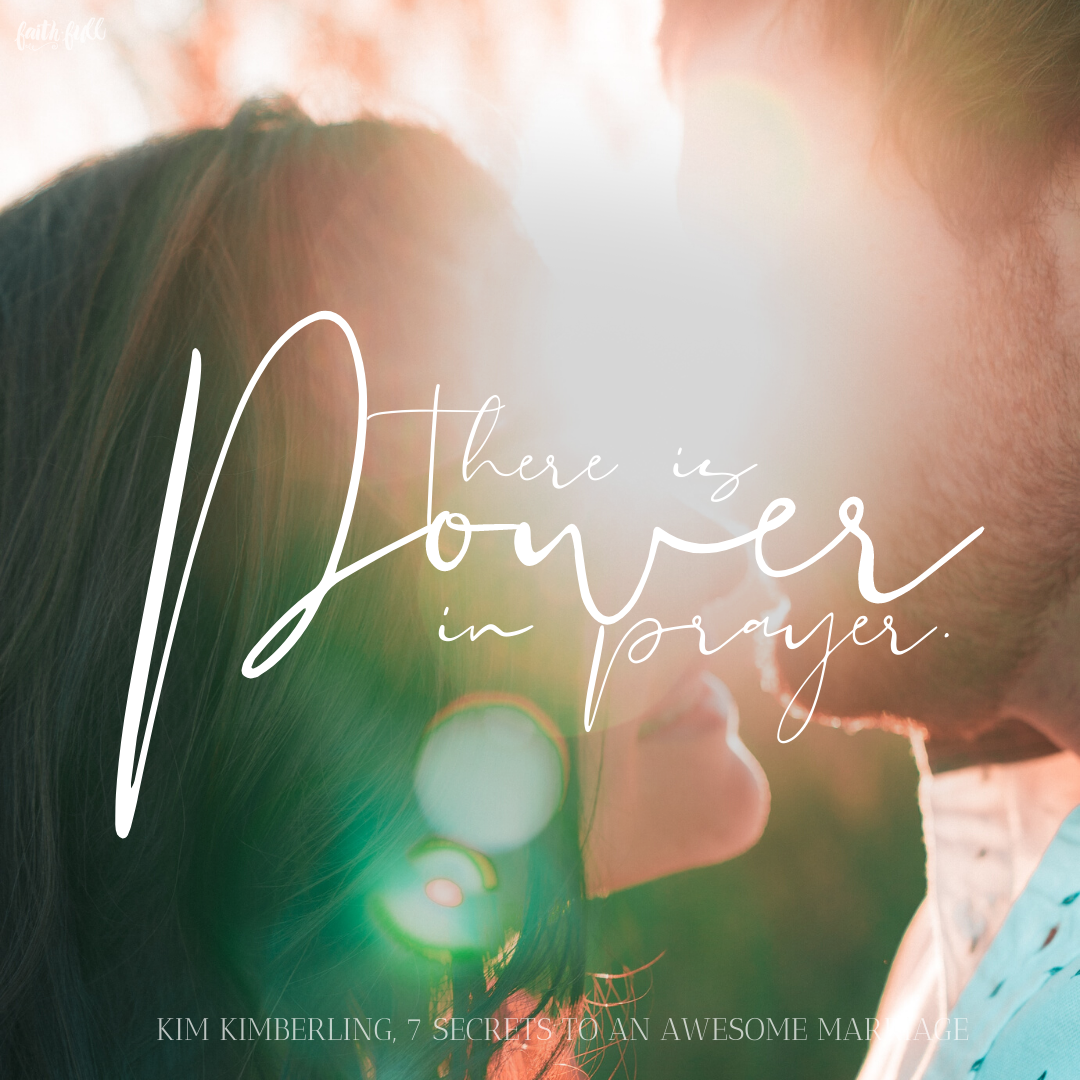 On our wedding night, Nancy and I knelt by the side of the bed in our bridal suite and prayed. We didn’t know it then, but that night we began to lay a foundation of regular prayer together that has made an indescribable difference in our marriage.

Prayer together has literally been the glue that kept us together through storm after storm. [tweet this]

I wish I could tell you that I planned that first prayer, but I did not. The idea to pray on our first night as husband and wife was Nancy’s. On the outside, I was praying, but on the inside I was saying, I can’t wait to get this over with and get on with our wedding night together. I was not there spiritually, but do you know what I later realized? God was, and He honored my feeble attempt to connect with Him.

Nancy had taken much more time to think through this marriage thing than I had. A wise woman had advised her of the importance of a husband and a wife praying together in marriage. Nancy took her seriously, and over the years of our marriage we have knelt by the bed together almost every evening in prayer.

Looking back, I have learned a lot about a husband and a wife praying regularly together. There is something about the regularity. Some nights I feel connected to God and Nancy, and some nights I feel distant. Some nights I cannot wait to pray with her, and others I could not care less. If I went with my feelings, our nights of prayer in marriage would be closer to 25 percent rather than 95 percent.

It is not about whether I feel like it or not. Rather, it is about consistently coming before God together and laying our life together before Him. I strongly believe there is power in consistency. Not that God has a scoreboard in the sky that records prayers as points, but rather that our kneeling together night after night gave us the opportunity to lay every care, concern, joy, and sorrow before the Lord.

We have seen Him show up with answers to prayer more times than either of us can count. Some were dramatic. Some were simple. Some were “no,” but He always was there. We felt like a team — me, Nancy, and God. Together we have found that we are unbeatable.

But sometimes praying together was far more than a routine. Sometimes, it was a lifeline—like after our son was born. We had been married five and a half years and had waited with great expectation for that moment. Things seemed good in our marriage — we were now a family.

Yet the next year was not what I wanted or expected it to be. Nancy and I grew apart. We went through the normal pattern that often happens when a baby comes. I felt a little left out. Many evenings we were both tired and often irritable, and in looking back, there were some issues we had avoided dealing with that were now coming to the surface. One of these was taking each other for granted. So we fought more and did not fight well.

The closeness that we both cherished became distant and short-lived. We talked about it a lot, but the talks were doing more harm than good. I would get angry, and she knew I was not hearing what she was saying. I never thought we would part, but one night after a difficult argument Nancy said she was thinking that we might need to separate or divorce. She told me she was confused and did not think she really wanted a divorce, but she was just not happy. I felt like the wind had been knocked out of me. I hurt in a way that I had never hurt before.

I didn’t know what to do. I didn’t want to lose her and our family that we waited so long to have. So I prayed and Nancy prayed. We prayed together and we prayed individually. We asked God for help, to do for us what we could not do for ourselves. I wondered what God would do. Would He act at all? I had never really doubted in the past, but suddenly, I was not sure.

Nancy has always found good women to be mentors in her life. At this time of crisis in our marriage, she sought the counsel of an older woman in our church. Nancy went to the lady with a story of her “friend” who was struggling in her marriage.

The story Nancy unfolded was ours, packaged as someone else’s. But this wise woman wasn’t fooled, as she told Nancy years later. Her counsel to Nancy was this, “Tell your friend to not give up. Tell her not to leave her marriage based on her feelings because they will change from time to time. Marriage is a commitment for a lifetime. Tell her to love her husband and to put God first.” Nancy and her “friend” said thanks, and she followed the advice of this woman God had placed in her life.

You may be in the same place today that Nancy was years ago. You started your marriage with hopes and dreams that now seem shattered. Deep inside you hate the thought of divorce and the pain it brings, but you also know that you cannot go on living in your marriage unless something changes. This is where we found ourselves. As I look back over the years of our marriage, most of the memories are very good, but this time in our lives still has a dark black cloud over it. The knot in my stomach was there all the time, and even as I write this I can feel the knot beginning again.

There were three things that I think made the difference for us. First, Nancy sought out a wise mentor who was a very strong Christian woman. Second, in the midst of all the pain, I had to let her go if she needed to go. I could not have her stay because I manipulated her. She had to stay because she made the decision to stay. Third, we both sought God and literally let Him guide us step by step through this darkness. It was not a quick fix, but over time our marriage began to grow again, and together we buried the divorce word forever.

Over the years there have been many other storms in our lives. Some came because we were screwing up our marriage, and some came from the outside. Each of these storms rocked our boat, but we never capsized. We learned to ride them out and also learned that on the other side were always calm waters again. The fact that we were consistently praying during both the good and bad times made a difference. Even when we did not feel like praying, we did. There was something about the regularity that made a huge difference. It taught us to put God first. It taught us that He always had an answer for every problem. It gave us hope when the world told us there was none. If we had not made prayer a consistent part of our life together, the odds of us making it would not have been good.

Praying together every night encouraged us to resolve issues or at least call a truce before prayer time. So what about you? How often do you and your spouse pray together? Probably not often. One survey says that less than 8 percent of Christian couples pray regularly together. Isn’t that amazing? I mean, as Christians, we know better.

There is power in prayer. We have the ear of the Creator of the universe, and we fail to whisper into it.

Excerpted with permission from 7 Secrets to an Awesome Marriage by Kim Kimberling, copyright Zondervan.

Every marriage is going to struggle. If you’re just starting out in marriage — pray as a couple! If you’ve been married a long time, but never started this practice — start today! If your marriage is full of joy, cooperation, and mutual support — pray together!  If you’re discouraged about your marriage, battling through seemingly impossible challenges, or feeling trapped in an unhappy and angry relationship and stunned that the words “separation” or “divorce” are actually on the table? What can you do? Pray together. If your spouse won’t pray with you, pray anyway. God is with you and He is for you and the success of your marriage — not just that it would survive, but that the two of you together would thrive! Come join the conversation on our blog! We would love to hear from you about prayer and marriage and putting God first!