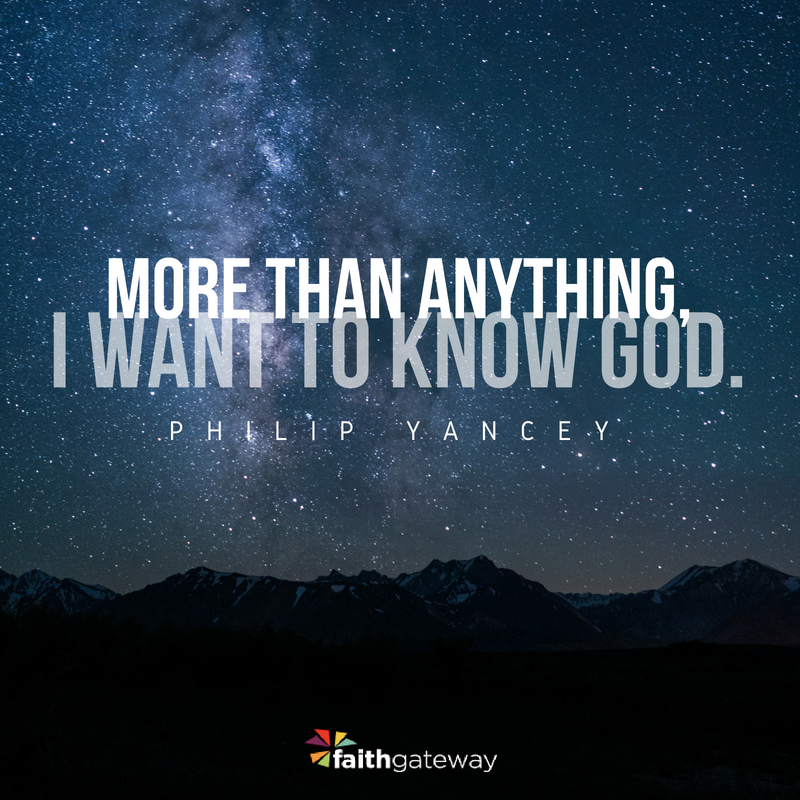 According to Gallup polls, more Americans will pray this week than will exercise, drive a car, have sex, or go to work. Nine in ten of us pray regularly, and three out of four claim to pray every day. To get some idea of the interest in prayer, type “prayer” or “pray” in an Internet search engine like Google and see how many millions of links pop up. Yet behind those impressive numbers lies a conundrum.

When I started exploring the subject of Christian prayer, I first went to libraries and read accounts of some of the great pray-ers in history. George Müller began each day with several hours of prayer, imploring God to meet the practical needs of his orphanage. Bishop Lancelot Andrewes allotted five hours per day to prayer and Charles Simeon rose at 4:00 a.m. to begin his four-hour regimen. Nuns in an order known as “The Sleepless Ones” still pray in shifts through every hour of the day and night. Susannah Wesley, a busy mother with no privacy, would sit in a rocking chair with an apron over her head praying for John and Charles and the rest of her brood. Martin Luther, who devoted two to three hours daily to prayer, said we should do it as naturally as a shoemaker makes a shoe and a tailor makes a coat. Jonathan Edwards wrote of the “sweet hours” on the banks of the Hudson River, “rapt and swallowed up in God.”

In the next step I interviewed ordinary people about prayer. Typically, the results went like this:

Is prayer important to you? Oh, yes.

How often do you pray? Every day.

Do you find prayer satisfying? Not really.

Do you sense the presence of God when you pray? Occasionally, not often.

Many of those I talked to experienced prayer more as a burden than as a pleasure. They regarded it as important, even paramount, and felt guilty about their failure, blaming themselves.

Hans Küng’s theological tome On Being A Christian, 702 pages long, did not include a chapter or even an index entry on prayer. When asked later, Küng said he regretted the oversight. He was feeling so harassed by Vatican censors and by his publisher’s deadlines that he simply forgot about prayer.

Everywhere, I encountered the gap between prayer in theory and prayer in practice. In theory prayer is the essential human act, a priceless point of contact with the God of the universe. In practice prayer is often confusing and fraught with frustration. My publisher conducted a website poll, and of the 678 respondents only 23 felt satisfied with the time they were spending in prayer. That very discrepancy made me want to write this book.

Advances in science and technology no doubt contribute to our confusion about prayer. In former days farmers lifted their heads and appealed to brazen heavens for an end to drought. Now we study low-pressure fronts, dig irrigation canals, and seed clouds with metallic particles. In former days when a child fell ill the parents cried out to God; now they call for an ambulance or phone the doctor.

In much of the world, modern skepticism taints prayer. We breathe in an atmosphere of doubt.

Why does God let history lurch on without intervening? What good will prayer do against a nuclear threat, against terrorism and hurricanes and global climate change?

To some people prayer seems, as George Buttrick put it, “a spasm of words lost in a cosmic indifference” – and he wrote those words in 1942.

Prosperity may dilute prayer too. In my travels I have noticed that Christians in developing countries spend less time pondering the effectiveness of prayer and more time actually praying. The wealthy rely on talent and resources to solve immediate problems, and insurance policies and retirement plans to secure the future.

We can hardly pray with sincerity, “Give us this day our daily bread” when the pantry is stocked with a month’s supply of provisions.

Increasingly, time pressures crowd out the leisurely pace that prayer seems to require. Communication with other people keeps getting shorter and more cryptic: text messages, email, instant messaging. We have less and less time for conversation, let alone contemplation. We have the constant sensation of not enough: not enough time, not enough rest, not enough exercise, not enough leisure. Where does God fit into a life that already seems behind schedule?

If we do choose to look inward and bare our souls, therapists and support groups now offer outlets that were once reserved for God alone. Praying to an invisible God does not bring forth the same feedback you would get from a counselor or from friends who at least nod their heads in sympathy. Is anyone really listening? As Ernestine, the nasal-voiced telephone operator played by comedienne Lily Tomlin, used to ask, “Have I reached the party to whom I am speaking?”

Prayer is to the skeptic a delusion, a waste of time. To the believer it represents perhaps the most important use of time. As a Christian, I believe the latter. Why, then, is prayer so problematic?

The British pastor Martyn Lloyd-Jones summed up the confusion: “Of all the activities in which the Christian engages, and which are part of the Christian life, there is surely none which causes so much perplexity, and raises so many problems, as the activity which we call prayer.”

I write about prayer as a pilgrim, not an expert. I have the same questions that occur to almost everyone at some point.

Is God listening? Why should God care about me? If God knows everything, what’s the point of prayer? Why do answers to prayer seem so inconsistent, even capricious? Does a person with many praying friends stand a better chance of physical healing than one who also has cancer but with only a few people praying for her? Why does God sometimes seem close and sometimes far away? Does prayer change God or change me?

Before beginning this book I mostly avoided the topic of prayer out of guilt and a sense of inferiority. I’m embarrassed to admit that I do not keep a journal, do not see a spiritual director, and do not belong to a regular prayer group. And I readily confess that I tend to view prayer through a skeptic’s lens, obsessing more about unanswered prayers than rejoicing over answered ones. In short, my main qualification for writing about prayer is that I feel unqualified – and genuinely want to learn.

More than anything else in life, I want to know God.

The psychiatrist Gerald C. May observed, “After twenty years of listening to the yearnings of people’s hearts, I am convinced that human beings have an inborn desire for God. Whether we are consciously religious or not, this desire is our deepest longing and most precious treasure.” Surely, if we are made in God’s own image, God will find a way to fulfill that deepest longing. Prayer is that way.

I have not attempted a guide book that details techniques such as fasting, prayer retreats, and spiritual direction. I investigate the topic of prayer as a pilgrim, strolling about, staring at the monuments, asking questions, mulling things over, testing the waters. I admit to an imbalance, an overreaction to time spent among Christians who promised too much and pondered too little, and as a result I try to err on the side of honesty and not pretense.

In the process of writing, however, I have come to see prayer as a privilege, not a duty. Like all good things, prayer requires some discipline. Yet I believe that life with God should seem more like friendship than duty. Prayer includes moments of ecstasy and also dullness, mindless distraction and acute concentration, flashes of joy and bouts of irritation. In other words, prayer has features in common with all relationships that matter.

If prayer stands as the place where God and human beings meet, then I must learn about prayer. Most of my struggles in the Christian life circle around the same two themes: why God doesn’t act the way we want God to, and why I don’t act the way God wants me to. Prayer is the precise point where those themes converge.

Excerpted with permission from Prayer: Does it Make a Difference? by Philip Yancey, copyright Philip D. Yancey.

What about you? How would you answer Philip Yancey’s questions:

Is prayer important to you? How often do you pray? Approximately how long? Do you find prayer satisfying? Do you sense the presence of God when you pray?