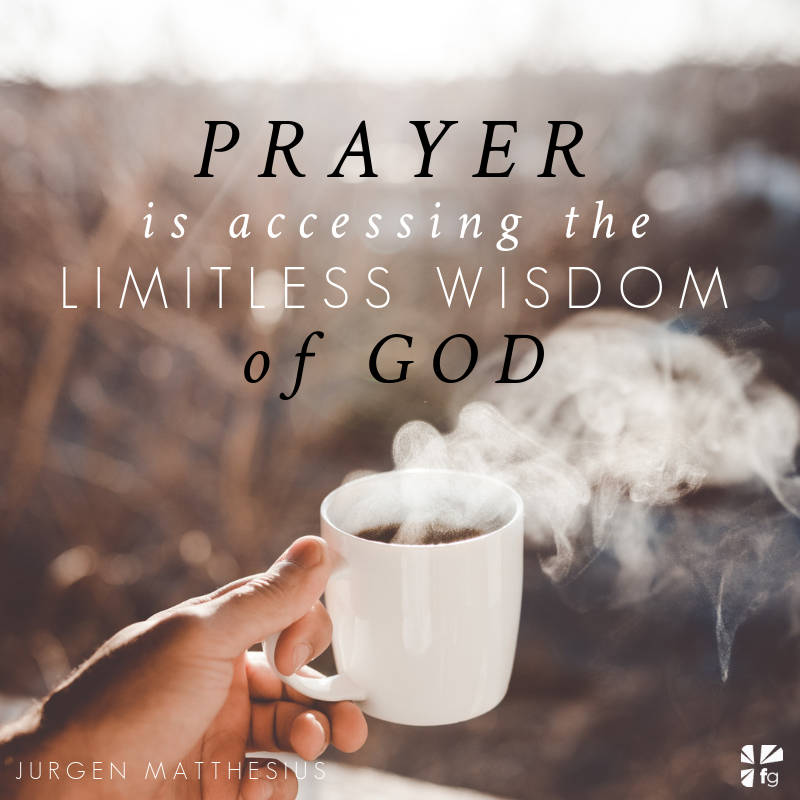 Prayer is a battle. Sometimes it may not feel like it; other times it is all battle and little joy. The soul delights in prayer. It is how it breathes. The spirit is invigorated through prayer. It is how it gets recharged. The flesh… well, it’s not too keen on prayer at the best of times. Prayer interrupts its lusts and agenda, putting the things of God ahead of the things of self. The flesh behaves like a small child wanting candy in the checkout line at the grocery store, throwing a tantrum when it’s told no. The child doesn’t like to hear no, and neither does the flesh. So the first battle of prayer is within us. It becomes a discipline. The dividends of persevering and building to a disciplined prayer life will outweigh almost every other endeavor.

This charge I commit to you, son Timothy, according to the prophecies previously made concerning you, that by them you may wage the good warfare. — 1 Timothy 1:18

Prayer is primarily about conflict. There are two dimensions operating simultaneously, with each seeking to dominate the other.

Paul in the above verse beckons Timothy to war in prayer to have his life line up with the prophetic words of God spoken over his life. Even though these words are the words of God, Paul is reminding Timothy that the Word of God and His will inherent within it do not happen automatically but must be pushed into the place of dominion by our engagement of prayer.

There is a constant battle going on over our heads in the spiritual realm. It is in conflict with angels and demons battling over the souls of mankind. We read words like strongholds in the Bible. Strongholds are always associated with warfare. The enemy has “built places of fortified resistance” (the Oxford dictionary definition of stronghold) in the earth to resist the will of God.

If we were honest, the battle and conflict are not limited to above our heads but rage within our heads and our hearts also. I used to love the old Donald Duck Disney cartoons where Donald is in a conflict and has a small angel Donald sitting on his right shoulder, but a small devil Donald sitting on his left. One is telling him to do what is right, while the other is telling him to do wrong. Whichever one he obeys determines what happens next in his life. I think Walt Disney captured this truth perfectly.

Battle on a Global and Cosmic Scale

The Bible says in the book of Joshua that after the death of Moses, God spoke to Joshua and told him to cross over the Jordan and walk through the land of Canaan and that all the places the soles of his feet shall tread was his divine portion and inheritance. Walking on the ground has to do with dominion. Moses is instructed to take the sandals off his feet because the place where he was standing was “holy ground,” literally “belonging to God,” and he needed to acknowledge and reverence this fact. When Joshua came to face the fortified stronghold called Jericho, God commanded him to walk around it. This is warfare. Now look at this scripture in the book of Job:

Now there was a day when the sons of God came to present themselves before the Lord, and Satan also came among them. And the Lord said to Satan, “From where do you come?” So Satan answered the Lord and said, “From going to and fro on the earth, and from walking back and forth on it.” — Job 1:6–7

Satan tells God he has come from the earth, that this is his dwelling place. But look at what activity the devil is engaging in. He is walking back and forth, to and fro, on it! Satan is doing this to claim the territory as his own. He has sought a place where his will is done, where he sits on his throne, where he rules. We are caught in the middle of this battle. Whether we like it or not, we are involved in a cosmic conflict and there are eternal consequences at stake. Prayer battles by pushing back the agenda of darkness to establish the kingdom of light. This is the purpose and focus of prayer.

As the apostle Paul said when he was strengthening and encouraging the church,

We must through many tribulations enter the kingdom of God. — Acts 14:22

The battle is not won on the sidelines. It is won on the field. Each one of us is called to take the field and establish the kingdom. This only happens through PUSH kind of prayer. It must be forceful, focused, and effective prayer. We push to see the kingdom come first in our own hearts and lives. Then it flows into our families, our communities, and throughout the world in which we live.

Because the kingdom of darkness really exists, spiritual warfare will be encountered. But fear not, for

Prayer is the weaponry we have been given to push back the powers of darkness and thwart their wicked agenda. Through the medium of prayer we are able to rise triumphantly in each and every circumstance:

Now thanks be to God who always leads us in triumph in Christ, and through us diffuses the fragrance of His knowledge in every place. — 2 Corinthians 2:14

Many would prefer to believe that prayer is nice but not necessary, much like sequins on a motorcycle helmet. So many see prayer as a nonchalant activity rather than powerful productivity, as incidental as opposed to intentional, kind of an “In case of emergency break glass” approach when it comes to prayer.

Yet Jesus “often withdrew into the wilderness and prayed” (Luke 5:16). It is the only thing the Bible mentions Jesus doing “often.” With just three years of public ministry from His launch to His crucifixion, the clock was ticking, and He didn’t have a whole lot of free time to kill. He prayed in solitary places often because it was the most productive activity for Him to engage in, fueling and clarifying all that He did.

We are too busy to pray, and so we are too busy to have power. We have a great deal of activity, but we accomplish little; many services but few conversions; much machinery but few results. — R. A. Torrey

Christianity has very much Westernized during the last few hundred years and has developed a somewhat dysmorphic perception of war and battle that is not consistent with the teachings of the Bible. Our very anti-war culture believes that peace can be obtained without the use of force or the exercise of authority. If we could just gather enough beauty pageant finalists to declare their devotion to “world peace” and enough Prius drivers to bear bumper stickers stating “Coexist” and “War Is Not the Answer,” then surely we could have a world without war. But back in reality, life teaches us that bullies don’t quit their bullying antics for your lunch money simply by you giving them all your money before school begins.

It requires an intervention of authority and justice to rein in the antics of the bullies and neutralize their negative influence.

Jesus describes the devil as a thief who comes to steal, kill, and destroy (John 10:10). Amazingly, many twenty-first-century believers think Jesus was using hyperbole here to describe Satan and his agenda. But Jesus is not given to exaggeration or lies, as He is the personification of truth. He is describing for us perfectly the character of Satan, who is described by the apostle Peter as an adversary (one who actively opposes) in 1 Peter 5:8. Left unchecked, he will break into your world to steal, plunder, kill, and destroy all the things God has brought into and blessed your life with. He must be resisted. He must be pushed out!

The Battle for Connection

The greatest battle you will face in this life is connection with God. [tweet this]

Jesus had to leave the crying of the crowd, the demands of the multitude, and the solace of His companions in order to keep His connection with God the Father strong. Prayer is the greatest gift extended to us from heaven because it is direct access to and complete fellowship with God, the Creator of the universe.

You have fed your flesh and its desires from the time you were a nursing infant, so a spiritual appetite must be something that is developed. You will never find so many distractions as when you set aside time to pray. But you must battle daily for connection — this is how we get our daily bread from heaven. Remember, man does not live by bread alone but by every word that proceeds from the mouth of God (Deuteronomy 8:3).

Prayer is accessing the limitless wisdom of God; prayer is an invading of the impossible; and prayer is the way your spirit recharges, confidence and courage replenish, and vitality is restored to your soul.

Fight the fight to get connected. It’s worth it!

Excerpted with permission from PUSH: Pray Until Something Happens by Jurgen Matthesius, copyright Thomas Nelson.