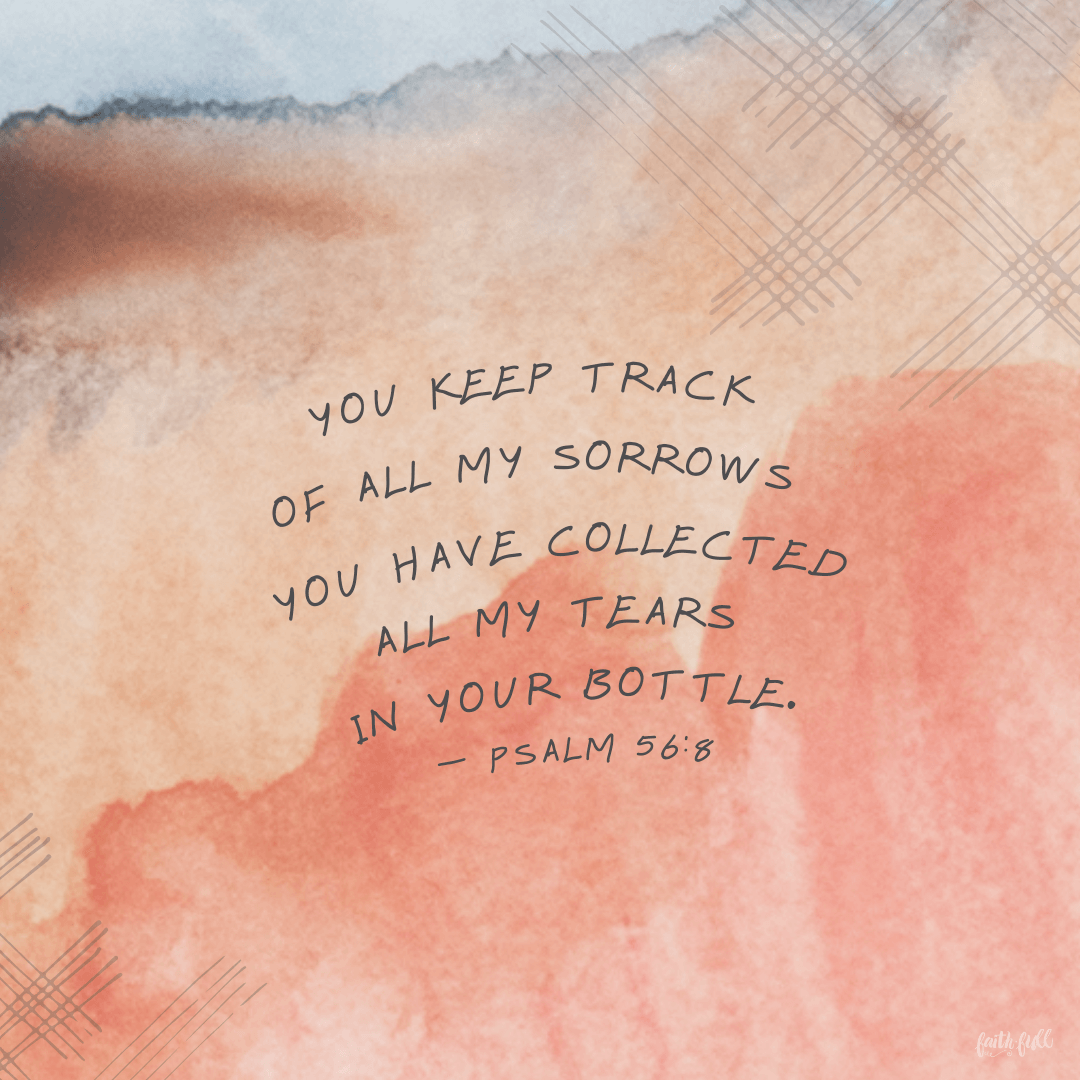 The Lord has chosen you to be His treasured possession. — Deuteronomy 14:2

I first heard about the practice of cutting when our oldest daughter was in middle school. We lived in southern California at the time, and a couple of girls in her grade had been seen with razor marks on their arms. My heart ached for the girls and their families. What would make a teen want to hurt herself in that way?

Back then, I thought the girls’ behavior was an isolated incident, one of those “out there” things a kid growing up in the shadow of Hollywood might decide to try. Now, though, I know that adolescent self-harm, often through cutting and burning, is alarmingly common as teens struggle to cope with stress at school, in their families, and in peer relationships. And teen suicide — self-harm’s evil cousin — is also on the rise, jumping 56 percent in a single decade. Today, suicide is the second leading cause of death among adolescents, right behind car wrecks and other accidents.1

Statistics like these would come as no surprise to my friend Karen — nor would the findings that say that self-harm and suicidal thoughts cross racial, gender, and socioeconomic boundaries. To all appearances, Karen’s daughter Natalie looked like she had a near-perfect teen life…

Natalie hung up the phone, anger and hurt boiling inside her. She had tried to help her friend, to make her see that having sex with her boyfriend was not a good idea, but it was no use. Rachel didn’t want to hear it, and their heated conversation had made one thing perfectly clear: not only was she rejecting Natalie’s advice; she was rejecting her friendship.

Grabbing her tennis racquet, Natalie headed outside, slamming the door behind her. Whack! Whack! Whack! She smacked the ball against the garage door, over and over again, tears blurring her vision. She was just so angry! Stooping to pick up the ball, she felt as though she would explode. She slammed her fist into the stucco wall.

Her knuckles were ripped and bloody, but Natalie didn’t care. Right now, she hated Rachel. She hated herself. Why had she even said anything? So much for the Bible’s command to speak the truth in love.2 When it came to friendships, speaking the truth could be far too costly.

Natalie went back inside, now more hurt than angry. She knew a couple of girls at school who had cut themselves, saying it gave them a sense of control. At first, Natalie had thought they were weird; now she wasn’t so sure. Maybe they knew something she didn’t.

Natalie opened the cabinet above her sink, searching for something sharp. Would a disposable razor work? She didn’t know — and frankly, she didn’t care. Right now, she just wanted to find an outlet for her pain. She drew the blade across the back of her hand and watched, transfixed, as the blood came. It hurt, but in a strange way it also felt like a release. She pressed the razor into her other hand.

The next morning, a series of angry red lines were all that remained of Natalie’s rage. She managed to leave the house without anyone seeing the marks, but at school they weren’t so easy to hide. A friend alerted the school counselor, who called Natalie into his office. That night she told her parents what she had done.

Karen was as stunned as she was confused. Natalie was a gifted athlete, the president of her sophomore class, and a leader in the church youth group. Not only that, but she was gorgeous. To look at her, no one would ever guess that anything could be wrong in her life!

Karen felt as though she had failed as a mother. “When I saw Natalie’s hands,” she told me, “all I could think about was that these were the same hands I kissed that day in the hospital when she was born. They were the hands that had slipped into mine when she was a little girl, as the two of us looked for shells on the beach. They were beautiful hands — and they still are; only now they look angry and scarred. What was going on inside my baby girl? Why would she want to hurt herself?”

Karen and Tom cried out to God for wisdom and insight. They also reached out to a professional counselor for advice.

The counselor helped them understand some of the things that might be going on in Natalie’s mind, like how even something like a desire for good grades or being popular with her friends can create unimaginable stress for a teen who thinks she needs to do everything “right.” Equipped with a new perspective on how they could help their daughter, Karen and Tom asked God to show them what they could do.

God answered that prayer — but not in the way they expected. Instead of telling them what to do, God revealed what He had already done.

“The main way that God speaks to me is through Scripture,” Karen said, “and as I was praying for Natalie, I came across Isaiah 49:15. Here’s what it says: ‘Can a mother forget the baby at her breast and have no compassion on the child she has borne? Though she may forget, I will not forget you!’ When I read those words, I knew that God was speaking to me, saying that He loves Natalie and that He will never forget her. He has everything under control.”

I have engraved you on the palms of my hands.

“I know that Natalie’s hands were marked by anger,” Karen said softly. “But God’s hands are marked by love. He has Natalie’s name written on His hands. I can trust Him to take care of her.”

God will never forget your child. Their name is engraved on the palms of His hands.

Karen and Tom continued to pray, asking God to bring good out of Natalie’s pain. One night, several weeks later, Karen slipped into Natalie’s room to kiss her good night. She found her daughter propped up in bed, an open Bible on her lap.

“It says we’re supposed to consider it pure joy whenever we face trials, because God uses them to test our faith and make us complete. I’ve had a lot of trials this year—”

“Uh-huh,” Karen agreed, waiting for her daughter to continue.

“So I guess it’s all good. I mean, God is going to use the bad stuff to bring about good stuff. And that promise gives me joy.”

Karen wanted to say something, but her emotion choked her words. Through one simple verse, God had answered her prayer for redemption. He had filled her daughter’s heart with joy and with a few simple words opened the door to hope. Karen knew the road ahead could still be rocky (and that Natalie could still put undue pressure on herself), but God had shown Himself faithful. Having begun a good work, he could be counted on to complete it.3

When Karen told me her story, she said one of the hardest things for her was that she felt so ill-equipped to help her daughter. We get that, don’t we? When teens struggle — whether the problem involves self-injury, peer relationships, suicide attempts, or something else — there are plenty of times when parents don’t understand what is happening, and we don’t always know how to help. Many times, we aren’t even sure how to pray.

The good news is that God knew there’d be days — and even entire seasons — like that. During those uncertain times, we can turn to the Holy Spirit for help. I love how Romans 8:26 reads in the NLT:

The Holy Spirit helps us in our weakness. For example, we don’t know what God wants us to pray for. But the Holy Spirit prays for us with groanings that cannot be expressed in words.

The Holy Spirit helps us when we don’t know how to pray.

The God who searches our hearts and those of our teens knows exactly what is needed. As parents, we can turn to Him in our greatest weakness and confusion, knowing that not only will His Spirit help us, but that He will pray for us — and that even in the most bewildering or painful challenges, He will cause everything to work together for the good of those who love God and are called according to His purpose for them.4

Like you, I want God’s best for my kids. As I reflect on these verses, I cannot imagine a greater privilege than that of joining our human hearts and longings together with the mind of the Holy Spirit, trusting in the power of prayer as we ask God to place His protective arms around our teens and accomplish His beautiful purposes in their lives.

Their names are ever before Him, written on his palms as His Spirit prays.

Prayers You Can Use

Show __________ that even if it seems as though everyone has forgotten or neglected them, You never will. Let them know that their name is engraved on the palms of Your hands. Isaiah 49:15-16

Let __________ find joy in even the most painful circumstances, knowing that You use trials to develop endurance, strengthen character, and make us mature and complete, not lacking anything. James 1:2-4

When __________ has to choose between life and death, blessings and curses, prompt them to choose life so that they and their children may live. Deuteronomy 30:19

Keep __________ from cutting or harming themselves in any way, since they are Your children, Your treasured possession. Deuteronomy 14:1-2

Excerpted with permission from Praying the Scriptures for Your Teens by Jodie Berndt, copyright Jodie Berndt.

If your loved one is self-harming, you’re not alone. Many, many other Christians, including me, have prayed our teens through a scary season. Keep praying! The Lord loves them even more than we could possibly imagine and has them engraved on the palms of His hands! ~ Laurie McClure, Faith.Full