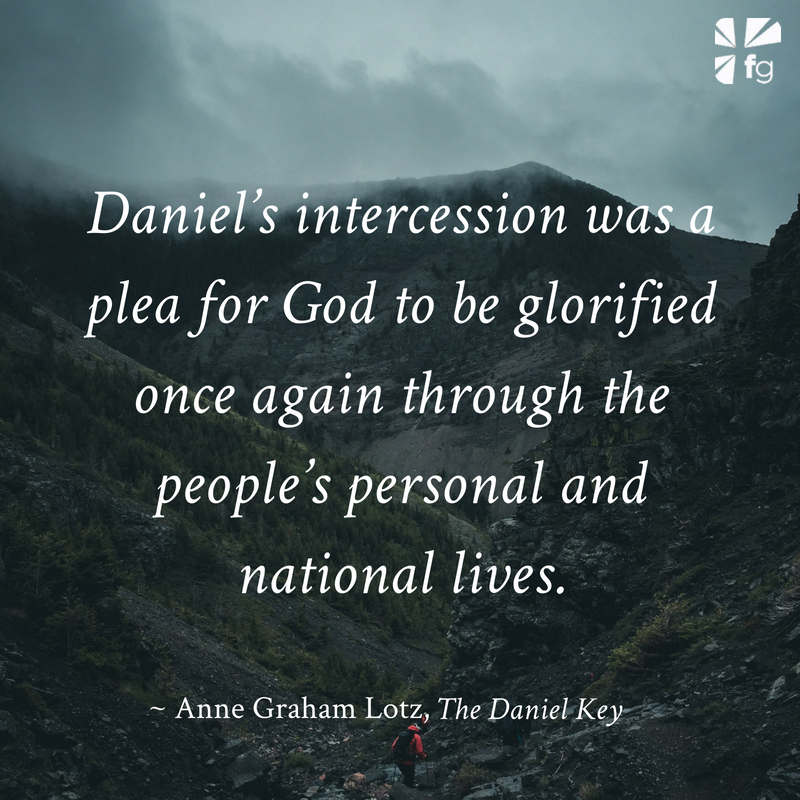 Editor’s Note: It’s Sit & Listen Saturday at Devotionals Daily. Enjoy reading as well as listening to this devotion from The Daniel Key by Anne Graham Lotz – which will introduce you to the 20 key choices Daniel made that took him down a path to a close relationship with God and a model for godly living to all around him! Listen on the blog below or on your Alexa device by enabling the skill and then prompting, “Alexa, ask devotionals to read today’s devotion.”

Praying for Others Makes a Difference

I urge, then, first of all, that requests, prayers, intercession and thanksgiving be made for everyone… This is good, and pleases God our Savior. — 1 Timothy 2:1, 1 Timothy 2:3

Daniel poured out his heart in prayer for his people. Again and again, he used plural pronouns as he prayed, in the end concluding:

As a result, God’s people were blessed beyond measure because Daniel had interceded for them.

Intercession has been compared to “plowing up the ground.” Any farmer can attest to the importance of plowing the ground before planting crops each spring. For me, it was a lesson I learned best from my grandfather.

We called my grandfather on my father’s side Daddy Graham. He was a tall, gentle, soft-spoken, true Southern gentleman. Daddy Graham wore black-and-white spectator shoes and a broad-brimmed hat pulled down on his brow, but only when he was going to church or to the nearby S & W Cafeteria. For most of the week, he dressed in faded, well-worn work clothes that carried with them the “sweet essence of agriculture” because he was a dairy farmer.

I was raised hearing from my father how Daddy Graham had made him get up at three o’clock every morning to milk about fourteen cows before he went to school. Daddy didn’t have an alarm to wake him up. What he had was the warning from Daddy Graham that if he overslept he would get a bucket of cold water in his face. Which he did. Once. From then on, Daddy was up on time.

Daddy Graham also grew the corn that he fed to his cows. The hottest I’ve ever been was when I walked through the cornfield next to my grandparents’ house one summer afternoon. I can verify that in the heart of a cornfield, there is no breeze at all. Just stifling heat. When I emerged from the field, I was dripping wet and covered with what felt like tiny paper cuts that the stiff leaves of the cornstalks had left on my arms. That was in the summertime. But after the corn was harvested, the ground in that cornfield was left bare and became hardened. Within a fairly short period of time, weeds and grass would begin to take over. Before Daddy Graham could plant the next crop of corn the following spring, he had to plow up the fallow earth and remove the weeds until the ground was soft enough to receive the seeds of corn, which he would then plant so they could absorb the rain and sunshine that he hoped would follow.

The nation of Judah had once been like a fertile field that had grown “crops” of righteousness — people who loved, obeyed, and served the Lord. But as a result of Judah’s sin, God had raised up the Babylonians as His instruments of judgment. The consequences were that Daniel and his people were removed and taken eight hundred miles east, where they were enslaved in a foreign land. In essence, the land and the people had lain “fallow,” unplowed for sixty-seven years.

So Daniel made the choice to intercede for his people…

To plow up the fallow ground.

To plead with God to forgive their sin, deliver them from judgment, “heal the land,” and bring life back to Jerusalem.

To beg God to return to the center of their national life by reviving authentic worship and restoring the temple.

Bottom line: Daniel’s intercession was a plea for God to be glorified once again through the people’s personal and national lives. It was a prayer for national restoration and revival.

If that sounds familiar, it’s because again and again, over the last few years, we have heard God’s promise to King Solomon in 2 Chronicles 7:14 invoked on behalf of our nation:

If My people, who are called by My name, will humble themselves and pray and seek my face and turn from their wicked ways, then I will hear from Heaven and will forgive their sin and will heal their land.

I have used that promise. I have prayed it. I have claimed it. I have built messages around it. It was a foundational verse for a prayer I wrote that was prayed in more than forty-four thousand services for our nation in 2014.1

Yet instead of experiencing revival, why does our nation seem to be collapsing until we are morally and spiritually bankrupt? Why are we witnessing a hell-bent charge into the miry pits of sin and secularism? Why, instead of being healed, have we seemed to become more polarized than ever?

Out of the sixteen verses covered by Daniel’s magnificent prayer of intercession in chapter 9, twelve of them confess sin. Not “their” sin, but “our” sin. All through his prayer, Daniel uses plural pronouns, which reveals to me that he was as aware of sin in his own heart as he was in the hearts of his people. There was nothing judgmental or self-righteous in his words. Instead, Daniel prayed with the words of a man who seemed to have a conscious awareness of his own sin as he prayed for the sin he saw in others. Could that be what’s missing in our prayers of intercession? I wonder.

We may never have another Great Awakening in our nation until you and I stop pointing our fingers at “them” and deal with the sin in our own hearts and lives. An old-timey revivalist, Gypsy Smith, was asked where revival begins.

He answered, “I draw a circle around myself and make sure everything in that circle is right with God.” Which begs the question: if we have yet to see revival re fall in our nation, could the problem be within the circle?

Save us from ourselves. Free us from the chokehold of sin. Protect us from our enemies. Spare us from Your judgment. We are pleading with You for an outpouring of Your Spirit on us, on our families, on our churches, and on our nation. Send down Your Spirit in Pentecostal fullness! Captivate us by Your love! Rend our hearts with deep conviction and sorrow for our sin! Draw us back to the foot of the Cross. Plunge us beneath the fountain filled with His blood, then…

Revive our hearts! Fill our hearts! Ignite our hearts… with a pure and holy passion to love You and to live our lives for You, and for Your glory alone!

Then use us to bring revival to the hearts of Your people!

O Holy God, look on Your people who are called by Your name. Hear our prayer. Listen to our pleas. Have mercy on us. Let the Fire of the Holy Spirit fall fresh on us!

For the glory of your great name, Amen

Praying for others changes lives. It makes a difference when we come to our Holy God and petition on behalf of our brothers and sisters. Who are you praying for today? Come share with us on our blog. We would love to hear from you! ~ Devotionals Daily