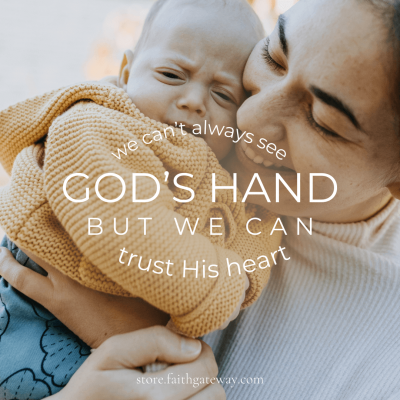 Praying for Physical Health, Safety, and Security for Your Children

“Lord, Why Did This Happen?”

I know I’m not the only mother who has ever questioned God’s tactics. Even my “spiritual giant” friend, Susan, found herself wondering what was up when her son Michael started suffering from violent stomach pains. Their pediatrician had dismissed the problem as nothing more than a flu bug, but when the symptoms persisted and Susan began noticing blood in the little boy’s urine, she and her husband, Randy, decided to consult a specialist. A battery of tests confirmed their worst fears. Just three and a half years old, Michael had something called Berger’s disease — an illness that, according to the doctors, was almost always fatal.

Susan was overcome with sadness and confusion. Why did this have to happen to her precious boy? Could it have been prevented? Had she given him too much milk as a baby or omitted something critical from his diet? Was God trying to punish her for some unconfessed sin?

Hurling accusations at herself and at God, Susan picked up her Bible and turned to John 9, the passage she was scheduled to read for her Bible study. In it, Jesus encountered a man who had been blind from birth. “Rabbi,” His disciples asked, “who sinned, this man or his parents, that he was born blind?”

Susan’s heart leaped into her throat as she read Jesus’ answer: “Neither this man nor his parents sinned, but this happened so that the works of God might be displayed in him.”

This happened so that the works of God might be displayed in him. As she read those words, Susan felt God’s peace welling up inside her, along with the sudden realization that He was in control. For the first time since Michael’s ordeal had begun months earlier, Susan found herself willing and able to set aside her own desires — namely, that her son would be healed — and begin to pray what she called “bigger-picture prayers.” She prayed for the young girl in the hospital bed next to Michael’s and the impact that their family’s faith might have on the girl and on her family. She prayed for the doctors and the hospital staff. She prayed for Michael to see God’s providence and blessing, even in the midst of his fear and pain. And most of all, she prayed that God would be glorified.

“The idea that Michael’s illness was an opportunity for God to work really set me free,” Susan later told me. “I was able to take my eyes off our problems and focus on God and His purposes.” And God’s purposes, as it turned out, included a welcome surprise: Michael’s “illness” ultimately revealed itself as nothing more than a kidney stone — incredibly painful but easily removed, and not at all life-threatening!

When you pray for your children’s health and safety, it helps to keep your eyes fixed on Jesus — not on the circumstances.

From Tragedy to Triumph

You would be hard-pressed to find a mother who couldn’t understand or sympathize with Susan’s initial fear and confusion. As anyone who has ever momentarily “lost” a child on a crowded beach or among the racks of a department store can tell you, it doesn’t take much to send our maternal instincts into overdrive. And in an age when threats to our kids’ safety seem to lurk around every corner — and we face a never-ending barrage of news stories about things like school shootings, internet predators, and the opioid epidemic — it can be easy to let our worries run wild. Especially when a tragedy hits close to home.

Our Moms in Prayer group routinely prayed for our children’s safety, both at school and as they go to and from the school grounds. One year, a first grader was struck by a car as he crossed the street to board his waiting school bus. All of us knew the boy and his family, and we spent the day crying out to the Lord on his behalf and waiting for news of his condition. Later that day, when we learned he had died, our grief — as individuals and as an entire community — was immeasurable.

Why, Lord? my heart cried. This boy was one we had prayed for by name — how could you have let him die? Wasn’t his name engraved on the palms of your hands?1

I don’t know why God allowed this precious child to die. As I prayed for his family, though, the Lord reminded me of Isaiah 55:8-9, the passage He gave me years ago when two of my closest friends were killed in an airplane crash:

That promise didn’t answer my “why,” but it gave me a sticking place for my faith.

More recently I’ve found comfort in how King David handled his own son’s death. As 2 Samuel 12:15-23 tells it, David was inconsolable during the boy’s illness, refusing to eat, bathe, or even get up from the ground. But when the child died, David’s response surprised everyone. He got up, washed, changed his clothes, and went to worship the Lord. When his servants asked about his emotional turnaround, David explained that while his son was still alive, he fasted and wept in the hope that God would let the child live. “But now that he is dead,” he said, “why should I go on fasting? Can I bring him back again? I will go to him, but he will not return to me.”2

I will go to him.

In this simple phrase David revealed his understanding of eternity. For Christians, death is never the end. And for parents who lose a child here on earth, I cannot think of a more comforting vision than that of a heavenly family reunion. Our earthly pain may seem endless, but as King David knew (and as Scripture reminds us), we grieve — oh, we grieve! — but we do so with hope.3

Our hope is anchored in eternity. But at the risk of sounding like a Pollyanna, I believe that those who trust in God’s goodness can experience a measure of joy on this side of heaven as well, even in the midst of our pain. Fern Nichols, founder and president of Moms in Prayer (formerly Moms In Touch), notes that, despite Satan’s attempts to discourage and defeat us, “God can take tragedy and turn it into triumph. He routinely does this for those who love Him.”4

Perhaps nowhere was this transformation more evident than at Columbine High School, where twelve teens and one teacher were killed by two student gunmen on April 20, 1999. Despite their unfathomable grief, local pastors, teachers, students, and even parents of slain students saw God’s hand in the spiritual revival that made Columbine a national touchpoint. Alisa Long, leader of Columbine’s Moms in Prayer group, wrote the following:

We had prayed that Columbine would be a light to the rest of the world. God answered our prayers in greater ways than we could have imagined. In my whole lifetime, I have never seen God working so visibly…

People indifferent to God, people wondering who God is, people who had put Him aside are thinking about Him again. Even hardened students said, “I saw God at Columbine.” Our limited view has exploded as we have watched the Lord in action and know “that was God.”

… What Satan meant for destruction, God has restored a hundredfold. Instead of losing children at that school, the Lord has increased His flock.

My message to moms is keep praying. He is there. He won’t forget you.5

You can pray with confidence, even in pain, because God takes tragedy and turns it into triumph.

As I pray for my kids’ health and safety, events like school shootings — as well as “everyday threats” like accidents, sickness, and sports injuries — are never very far from my mind. Even so, I can pray for their protection with confidence and encourage them to exchange their own worries for trust, knowing that, as the Columbine mom put it, “God is there, and He won’t forget us.”

How can I be so confident?

First, because God promised that He will hear us when he said, “Call to me and I will answer you.”6 Not only that, but I know that when we turn God’s promises into prayers for our children, the words carry power. Isaiah 55:11 says that God’s word will not return empty, but will accomplish what He desires. God’s purposes may not always match up to ours, but because we know that God sees “the big picture,” we can rest assured that His perspective is the right one.

I know God loves my children and truly wants the best for them. Romans 8:28 reads, “We know that in all things God works for the good of those who love Him, who have been called according to His purpose.” This doesn’t mean we (or they) won’t face adversity — in fact, the Bible pretty much guarantees that we will.7 But when God allows my children to suffer, I know He will use the experience to build their faith, their patience, and their strength — and that, at the end of the day, He will produce something good.

My dear friend Michelle has a daughter with severe physical, mental, and emotional needs. She knows what it’s like to parent from a place of confusion and pain. And when my own children are hurting or when I don’t understand what God is up to in their lives and I start to give in to worry or fear, I often remember her words.

“We can’t always see God’s hand,” Michelle says, “but we can trust His heart.”

The Lord’s love for your children is unfathomable. How could He love them more than you love them? Well, it’s true. How are you trusting your child’s life with your Father’s will for them? Come share on our blog!