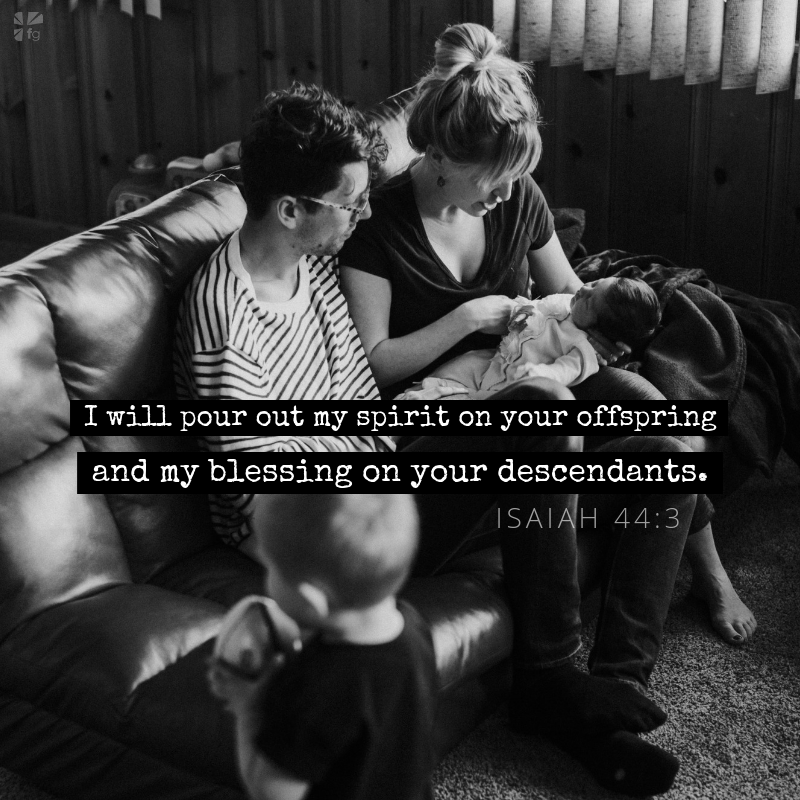 Praying When Your Children Have Children

I will pour out My Spirit on your offspring, and My blessing on your descendants. — Isaiah 44:3

Back when Praying the Scriptures for Your Children was released, my mom told me she wished she’d had it as a resource when my siblings and I were growing up. I had two thoughts. The first was that she didn’t need a book to help her pray the Scriptures; my mother is one of the most biblically literate and powerful prayer warriors I know.

The second was that I was glad she had the book then, because she was using it to pray for my children. They were ages five through eleven, and at the time, my daily life was a blur of car pools, soccer games, homework, meal prep, and laundry. (And that was before you factored in all my Very Important Jobs, like organizing the hula-hoop competition for the elementary school’s annual Bazooka Blowout.) There were plenty of days when I barely had time to throw up a “God, bless Annesley,” let alone beseech God to instill in her things like compassion, discernment, or the ability to speak kindly to her siblings.

I had attended a Christian parenting conference where one of the speakers asked, “If you aren’t praying for your children, who is?” I know the speaker meant that as a motivational charge, but honestly? I heard her and felt guilty. Even though I’d written a book about praying for your children, I didn’t always do a good job of actually doing it. I wanted to spend time asking God to fill my kids with wisdom and bless them with godly friendships and all, but it seemed like somebody was always throwing up, falling down, or needing me to make a turkey costume because all of the Pilgrim parts had been taken.

I needed reinforcements. And knowing that my parents were on the job — that they were talking to God about my kids’ health and their character and their relationship with Jesus — was an indescribable gift.

My friend Susan understands the value of this gift. She has five married children and twenty-one grandkids. In order to pray for them all, she assigns a day of the week to each family. And knowing she can go where her children sometimes can’t (“Grandkids roll their eyes less at grandparents than they do at parents,” she says), she doesn’t mind letting the younger generation know she is praying, whether it’s for a little one’s fear of going to sleep-away camp for the first time or an older child’s yearning for friends. Even the most unremarkable events — like soccer games or math tests — can become an invitation to pray.

For instance, Susan’s grandson Will was a sophomore in high school, facing a particularly challenging exam that could affect his overall GPA and ultimately his college applications. When Susan heard about the test, she asked God to provide things like mental clarity, alertness, and the ability for Will to recall what he had learned and do well — but she didn’t tell her grandson all of those details. Instead, when exam day rolled around, she sent him a simple text message: I am praying for you.

Afterward, Will was clearly excited. He’d done better than he’d hoped he would, and — whether he was smarter than he thought or the test was just easier than he expected — he figured that having a praying grandma in his corner had to be a plus.

Susan has prayed similar prayers for all of her grandchildren, asking God to provide everything from good health to good time management. “Children are all different,” she told me, “but a lot of their needs are the same. They all need safety, wisdom, protection from evil, fellowship opportunities, and godly mates (if they are to marry). They need the sorts of things you wrote about in Praying the Scriptures for Your Children. I use those prayers for my grandchildren!”

I was grateful for that endorsement, but I knew I hadn’t covered everything in that book. How, for instance, did Susan pray for her own children, now that they’d become parents? (I don’t have grandchildren yet, but I want to be ready — and who better to learn from than someone who has been there twenty-one times?)

Susan told me she and her husband, John, began praying for their daughters and daughters-in-law as soon as they learned they were expecting. “John and I prayed Psalm 139 during our kids’ pregnancies, asking God to fill them with peace about their unborn babies, knowing that he was forming them and ordaining all of their days — including the day that each child would be born.

“And as our grandchildren entered new phases, from toddler-hood to the teen years, we often prayed that our kids would call out to God for wisdom,” she continued. “Nobody really knows how to be a parent, so we asked God to give them a generous helping of wisdom, just as He promised to do.” (James 1:5)

Sometimes these wisdom prayers get very specific. When John and Susan realized that one of their sons-in-law didn’t seem to be connecting well with his son, they asked God for help. “The two guys are wired very differently,” Susan said. “I began to ask God to give [the dad] wisdom to take the initiative in the relationship, as well as the creativity to discover some common ground and shared interests with his son.”

Knowing that prayer support can be every bit as helpful to a young family as things like meals and babysitting, Susan keeps a notebook that includes specific requests for each grandchild.

“I ask my kids how I can pray for their kids,” she told me. “That’s not a very threatening question; even if your adult children aren’t walking with the Lord, they will usually be grateful for a grandparent’s love and support. And when we demonstrate love for our grandchildren by showing an interest in their lives, it’s like adding glue to our relationship with our own children and their spouses.”

Indeed. Susan and John have seen a strengthening of their family ties as the younger parents share concerns over everything from sibling relationships and character development to “non- spiritual” things like finding a soccer team for their daughter to join or a group of friends who share their son’s interest in music.

“Johnny and I are delighted when our kids and their spouses ask us to pray about something,” Susan said. “But we have to remember to watch our tongues. They are coming to us for prayer — not necessarily for advice.”

Praying for your grandchildren strengthens your relationship with your children and their spouses.

Excerpted with permission from Praying the Scriptures for Your Adult Children by Jodie Berndt, copyright Jodie Berndt.

We all want to be praying for our kids and realistically during the hustle-bustle of the early years, that may be more brief than we wish it was. For grandparents, there are oftentimes even more people to be praying for on a regular basis — kids and grands! How are you praying for your people? We want to hear. Come share with us on our blog!